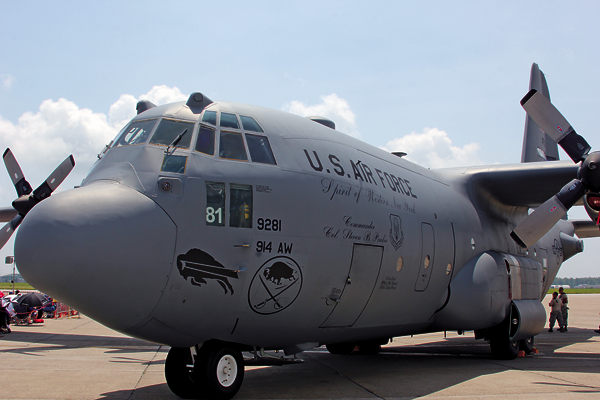 Shown is a C-130 military aircraft with Buffalo Bills and Sabres team logos on its side, along with the message, "The Spirit of Western New York." The plane was dedicated to the people of Western New York at July's 2015 Thunder of Niagara Air Show as a show of support. (File photo)

NIMAC has Niagara Falls base's back

Sometime next month, when a C-130 lifts into the air above the Niagara Falls Air Reserve Station, it will be the final deployment from the base by the 914th Airlift Wing using the huge military transport aircraft.

Bases elsewhere in the country have lost missions and subsequently been closed by the military.

In the case of NFARS, the Niagara Military Affairs Council has had its six for more than 20 years. NIMAC is constantly lobbying to ensure the base not only remains open, but also receives new missions and funds for improvements that embrace changing technology and modern military thinking for both the 914th Airlift Wing of the U.S. Air Force Reserve and its partner, the 107th Airlift Wing of the New York National Guard.

The rumble of C-130s may soon no longer be regularly heard in the skies, but as NIMAC Chairman John Cooper Sr. reported to the Niagara County Legislature just two months ago, changes are in the works.

One of the main changes will be the transition for the 914th over the next few years to a KC-135 Stratotanker air-refueling mission. President Barack Obama recently announced the fiscal year 2017 budget included $25.5 million for the conversion, with $9.2 million for additional training flying hours and 27 additional full-time-equivalent civilian employees, plus $16.3 million for overhaul of the fuel hydrants, fuel cell and maintenance back shop requirements.

Also, Cooper reported NIMAC continues work on the remotely piloted aircraft launch and recovery element for the 107th and, with the growth of cyber security in the military, hopes to encourage offices for the U.S. Coast Guard and the Customs and Border Protection agencies be brought to the base. 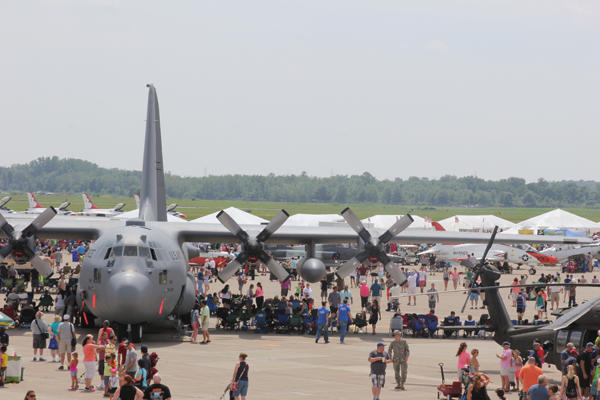 Shown is a C-130 military aircraft surrounded by spectators at the Thunder of Niagara Air Show. (File photo)

"Due to the Hatch Act, the military can't speak for itself. Consequently, it needs a voice to speak for it. For Niagara Falls, NIMAC is that voice," said Col. Robin Pfeil, USAF (ret.), former vice commander of the 914th.

NIMAC's work as a volunteer civilian group understands its base's needs and was recognized by the Pentagon as the epitome of what such a civilian group should be, said Pfeil, a Western New York resident who joined the NIMAC board of directors after his retirement.

NIMAC was established in 1996 as a result of the 1995 Base Realignment and Closure review of the 914th. In 2005, both the 914th and 107th were targeted and, in 2012, a budget action listed the 107th for closure. NIMAC, working in partnership with local, state and federal elected officials, fought back in each case. NIMAC also organized community support in rallies and letter-writing campaigns when needed.

"In my opinion, without John (Cooper) and (the late) Merrell (Lane), that base would not be open right now," Pfeil said this month.

Both Cooper and Lane were local businessmen who saw the value of the base to the community and were willing to put in countless hours over the years to preserve it.

Cooper said that probably the biggest thing NIMAC does is act as an information broker on the capabilities of the base. This often means talking and working with not only government and military staff members, but four-star generals and top elected leaders.

"Last year, we had the opportunity to meet with nearly all the major players that had to do with our base," Cooper said.

That included a visit to Air Mobility Command headquarters, the people responsible for the new KC-135 mission. This is the second time KC-135s have been at the base. They were previously operated until 2008 by the 107th, when the wing transitioned to the C-130 mission in association with the 914th.

Among base improvements NIMAC helped promote in recent years are a new maintenance hanger, two new lodging facilities, a new fire station, a new firing range and a new dining facility. A new operations building for the 107th is under construction and remodeling of the headquarters building for the 914th is underway. The C-130 training simulator planned for the base will likely be changed to a KC-135 simulator, Cooper said.

As for the remotely piloted aircraft mission at the base, Cooper said it is very high tech and classified. He added that although RPAs can be remotely piloted from here, the Air Force only flies the actual aircraft in war zones. None have been or will be seen flying over Niagara, he said.

While NFARS clearly has an economic impact as Niagara County's largest employer, there are other benefits.

The Niagara Falls International Airport might not have gotten its new terminal, without having the military as its neighbor. The air base's fire department often responds under mutual aid to assist local fire departments. It wasn't that long ago that the base's foam truck made short work of a car transporter fire on the I-190.

Then there's the social aspect. The people who work at the base not only stand for freedom and their country, they also often give their time to local organizations such as volunteer fire companies and the Red Cross, Cooper said. "They are good people to have in our community."

NIMAC will continue looking for new missions for NFARS.

NIMAC's board of directors is made up of representatives of the area's business community, former base commanders/base leadership and government officials. NIMAC is funded by civilian membership fees, grants, event sponsorships, business donations and funding of municipalities, including the towns of Wheatfield, Niagara, Lewiston, Cambria and Lockport, the cities of Niagara Falls and North Tonawanda, the counties of Niagara and Erie, and the state of New York.

NFARS is the last federal Air Force base in the state and the largest federal facility in this region. In addition to the 914th and the 107th, the base is also home to the Military Entrance Processing Station, the 277th Quartermaster Company of the Army Reserve, the Second Squadron of the 101st of the New York Army National Guard, the 865th Army Combat Support Hospital of the Army Reserve, and the 982nd Forward Surgical Team of the Army Reserve.

For more information about NIMAC or to join its membership, visit www.NIMAC.org. 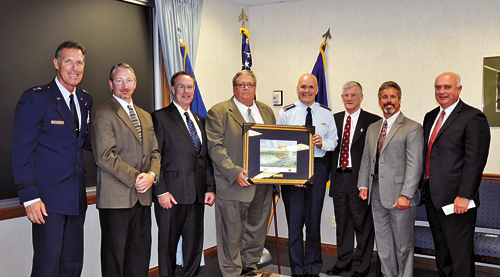