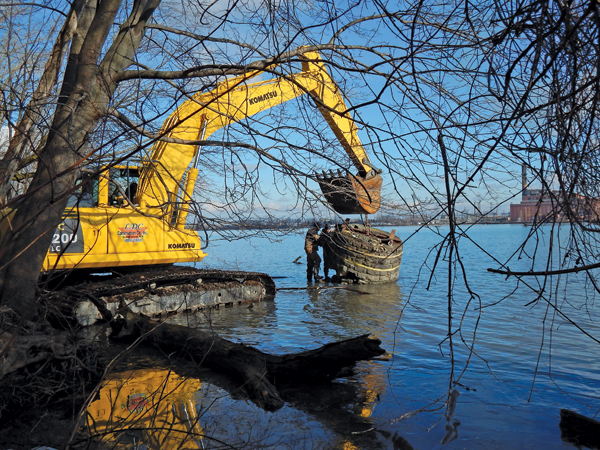 The addition of a stone well recovered from the Niagara River earlier this year by LDC Construction adds to the historic appeal of River Lea, the beautiful mansion at Beaver Island State Park. The recovery was a project spearheaded by Island resident Paul Leuchner, a retired Army Corps of Engineers biologist.

A century-old well that time forgot and the Niagara River nearly claimed has been restored to its rightful place on the lawn of the River Lea mansion.

On Feb. 2, Jeff Dinsmore and his crew from LDC Construction did the heavy lifting, raising the 6-ton well with an excavator and carefully transporting it via trailer to its new - and former - home.

The soggy saga of the well's trip back to dry land began 20 years ago as Leuchner's one-man campaign to restore the historic artifact. But Leuchner gives ample credit and thanks to a team of Grand Island volunteers that is still writing the final chapters in 2016. The cast of characters in this tale includes an award-winning construction crew; a park manager moonlighting as a volunteer roofer; and a stonemason and his son who also have strong ties to Beaver Island State Park.

Why did Jeff Dinsmore volunteer his LDC Construction crew and equipment for the well recovery project? "Paul asked me to - it's pretty much that simple," Dinsmore said.

He said he told Leuchner, 'I can get it moved - and we did.' LDC did the work for free because there were no funds for the project. Dinsmore said, "It won't be pretty." But after the work was done, he said, "It went a lot smoother than we thought it would." 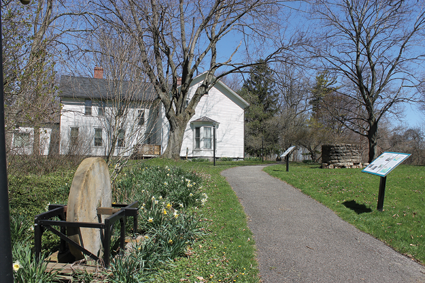 A grinding stone, brought to the site and placed on a steel base as part of an Eagle Scout project facilitated by Ricky Hoover in 2014.

Leuchner first noticed the stone well - half-submerged in the waters off River Lea - while he was kayaking in the 1990s. Later, he pointed it out to colleagues returning on a state barge after doing restoration work on Strawberry Island. "What's with this well over here?" he recalls asking. His question turned into a quest.

In 1999, Leuchner proposed a plan for recovery of the old well. At the time, he worked for the Army Corps of Engineers Buffalo District Office. "Although there was some interest, no funds could be found to implement this project," he said

Project Approval, But No Funding

Several more attempts were made over the years, but it was not until Leuchner's appointment to the Niagara River Greenway Commission that he was able to persuade the state office of Parks, Recreation and Historic Preservation to endorse the project.

The plan was refined in meetings with parks officials and members of the Grand Island Historical Society. The State Historic Preservation office gave approval in 2013 to proceed with the recovery of the old well.

But funding was still a problem.

Volunteers to the Rescue

"Thankfully, LDC came forward and volunteered to take it out at no cost to anybody," Leuchner said. "They basically performed a really, really useful and positive community service here, and it was very nice of them to engage all their equipment and their entire workforce for almost a whole day."

"They were very caring and did a very clean operation," Leuchner said. It was "a carefully orchestrated lifting and transport operation," he said. "They caused no disturbance in the river." But beforehand, Leuchner had worried about the risks posed by the age and condition of the artifact. "We all stood there with our fingers crossed, they started the lift and it came out in one giant block; not a piece fell out of it. And now it's an artifact that they can interpret and it becomes part of the historic setting there for River Lea."

Leuchner and Dinsmore's friendship was forged a couple of years ago when they were both part of a Buffalo Launch Club lecture series on Niagara River islands. LDC is the Chamber of Commerce 2016 "Environmental Stewards of the Year," honoring the company's 15 years of restoration work on every island in the Niagara River except the Canadian-owned Navy Island.

Before the well could be relocated, a right of way had to be established for heavy equipment access. Island resident Steve Birtz and Leuchner spent several weekends clearing a path to the waterfront. "We selected a right of way that would avoid any kind of environmental impact," Leuchner said.

Finally, on Feb. 2, the day arrived for the recovery of the old well from the river. Dinsmore and the LDC crew arrived early in the morning. By 1:30 p.m. that same day, they completed the entire project, and Paul Leuchner could breathe a sigh of relief.

"Well it's kind of a sense of accomplishment," Leuchner said. "It's been a long time of negotiating, and doing site investigation work and then trying to get sources of funding to try to get it moved."

There was another environmental concern that dictated aspects of the siting. "They put it on two pieces of plywood because the state Historic Preservation officer made it very clear that we could put it on the property," Leuchner said. "We could recover it, but we were not allowed to dig on the grounds of River Lea because there could be some historically significant artifacts in the soil there," Leuchner said.

Funding concerns were further eased when stonemasons John Anderson and his son, Tyler, of Grand Island, agreed to restore stones that were knocked from the well base when ravaged by years of Niagara River ice scouring. They volunteered their time because John Anderson's father, Russell, was a longtime manager of Beaver Island State Park, Leuchner said.

Once the base is completed, soil will be brought in to raise the land surface around the perimeter of the structure so it is easier to look into the interior of the well, Leuchner said. Recycled paving stones from elsewhere in Beaver Island State Park will be placed to provide access off the main path to the River Lea home.

"A replica of the original well roof, fabricated and donated by Andy Hillman, Beaver Island Park manager, will be the crowning touch and the last step of this extraordinary project," Leuchner said.

Hillman said he has completed the roof. "It did turn out rather well," he said. He said there is somewhat limited information about the appearance of the original well roof. "It's not really discernible in a lot of the pictures."

To make it authentic, he duplicated the pitch of the roof and the trusses. Because the well is stone, he said a slate roof "would look rather authentic."

It can be installed once it is stabilized and the bottom stone is restored. Because of the resulting weight of the roof, he said he would use a forklift to put it in place.

Hillman, park manager since 2011, has worked for the park service for 22 years. "I've had some experience with roofing when I was younger, dealing with patches on a slate roof."

Former town supervisor Mary Cooke was at River Lea Feb. 2 taking photos and watching the well project unfold. At the time, she also expressed doubts about the stability of the artifact.

"Paul was rightfully concerned that it would disintegrate," she said. But all went well, so to speak.

"It was a neat experience," Cooke said. "Just to watch LDC at work was incredible. It made me appreciate what Paul and LDC accomplished."

Cooke is corresponding secretary of the Grand Island Historical Society and a longtime member of their Education Committee. She said the project is significant to Grand Island residents.

"It adds another exhibit, a nice area of interest that can be accessed even if River Lea is not open," Cooke said.

"Paul really did a yeoman's job on pulling the well project together," said Barbara Birt, library chairperson for the Historical Society. "It's a great contribution for our premises."

Society President Curt Nestark said that when Leuchner proposed the well recovery, "I suggested that he take on the project. He agreed, and Andy Hillman and Jeff Dinsmore were the lead elements. I can't thank them enough," he said. "I'm very happy that they were able to rescue it before the ice in the river (eventually) swallowed it up."

Once soil is graded around the base and there's a roof atop the well, there are plans for it to be made into a wishing well for visitors, with the coins going toward River Lea's upkeep and preservation. "Those pennies have a way of adding up," Nestark said.

They already are, Leuchner said. "People have already gone down there and thrown money in the middle of it," he said. "It will be an interesting attraction there."

River Lea as an Educational Venue

Nestark added that the society has other plans in the works to enhance the site, including bringing Schoolhouse No. 5 to River Lea from its current location near Kelly's Country Store on Grand Island Boulevard.

Cooke said the area on River Lea's front lawn is progressing as an educational venue. There is a grinding stone on the left and the well on the right. Making a frame for the grinding stone placement was an Eagle Scout project in 2014 by Ricky Hoover. An all-weather interpretive sign eventually will be added for the two artifacts, Cooke said. The Historical Society has acquired some vintage farm equipment and carriage wheels that may be part of a permanent outdoor display at River Lea.

River Lea is described by the Historical Society as a beautifully furnished museum dedicated to Grand Island's rich history and to Grover Cleveland, who paid many visits to Allenton Farm as the nephew of Mr. and Mrs. Lewis F. Allen. The Allens founded the farm in the 1800s and built River Lea as a summer home.  Among its many treasures are an extensive collection of vintage clothing, Indian arrowheads, photographs, and antique kitchen and farm implements. The Historical Society holds annual spring bus tours for all Island fourth-graders. The students and their teachers have the opportunity to view historic landmarks across the Island while a society docent describes what they are seeing. At the same time, they also visit River Lea where they can inspect all of the rooms and listen to the docents explain details of historic artifacts, pictures, clothing and more. 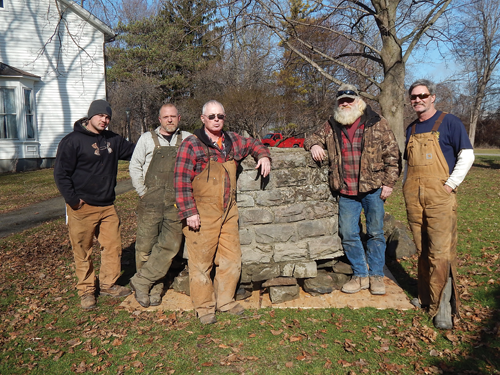 The LDC Construction crew poses near the well they recovered Feb. 2 from the Niagara River and moved into place at the River Lea mansion. From left, they are: Lyle Szapakowski, Greg Dinsmore, Mike Szapakowski, Jeff Dinsmore and Dan Dinsmore.