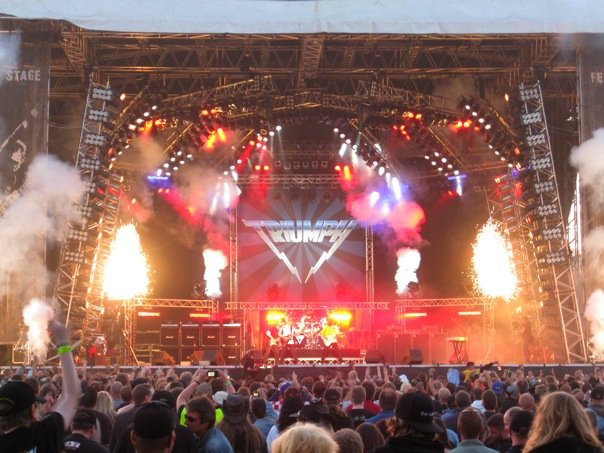 In the end, Emmett, Levine and Moore Triumph

They were a "Rock-n-Roll Machine" known for their annual stops at Kleinhans and later the Buffalo Aud. The Canadian power trio Triumph, featuring Rik Emmett, Mike Levine and Gil Moore, defined the arena rock era with a powerful stage show complete with lasers and a healthy dose of pyrotechnics.

In 1988, Emmett's departure marked the end of era for Triumph. After nine studio albums that produced show-stopping anthems such as "Magic Power," "I Live for The Weekend," "Fight the Good Fight," "Allied Forces" and the lone pop hit "Somebody's Out There," just to name a few.

It would be 20 years before the classic lineup performed together again, occurring after years of acrimony between Emmett and his former bandmates. Shows took place in Sweden and Oklahoma in 2008, but since then the question remains, will Western New York or any city ever experience Triumph in concert?

"Never say never as they say," Levine joked during a recent phone interview, referring to song on the Triumph's "Surveillance" album.

"Those last shows were an opportunity for us to bury whatever hatchets needed to be buried and the best way to do that was to go out and play a bit. Europe was a unique situation, because we had fans there, but we never performed there before. And we figured we could go and hide there and, if we truly stunk, nobody would notice. Not thinking clearly; there were tons of press people there to see us," Levine noted.

"The shows went well and we had a tour booked and then the recession hit and we decided to wait in the weeds and see what happens, and we are still waiting, so to speak. We talk about it every now and then, but I doubt you will see us play again."

That may be sad news to longtime fans of the band but, even though the band is not together onstage, they have renewed their friendship.

"We went through a tough stretch, but now we are on the dinner tour, so to speak,' Levine said. "We get together three or four times a year and laugh a lot. It's been great from a personal point of view."

Unlike many of their contemporaries, Triumph did not continue to record and perform with a sound-alike replacement for Emmett after he left in 1988, and the band recorded "Edge of Excess" - the only Triumph album that does not feature the core members.

"We thought about that, but ultimately when we started it was just Gil and I going into the studio and writing some stuff with Mladen Zarron," Levine said. "And when we had eight good songs, we recruited a guy that could tour with us, and that was (current Bon Jovi guitarist) Phil X. If I had it to do over again I would not have called it a Triumph record. Triumph was Rik, Mike and Gil, and calling it a Triumph record was a mistake on our part." 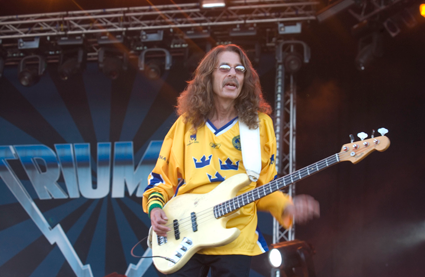 With the hatchets buried and the band's legacy intact, Levine has been able to look back at what led to the band's demise.

" I think Rik and Gil would agree that it was (the) 'Sport of Kings' (album) that had us asking ourselves what we were doing," Levine said. "The whole process was not fun. We all felt like we were getting a root canal every day. There are so many stories; we could talk for four or five hours alone about that one.

"We allowed the record company, for the first time, to be part of Triumph. It became a thorn in our side and then 'Surveillance' was a tough one to make. 'Sport of Kings' was a poppy album. There were some cuts I refused to even play bass on, and Mike Boddicker did the keyboard parts."

Triumph was a band with a dual existence, known for creating complex arrangements in the studio that incorporated classic rock, metal, jazz and progressive rock. Thematically, the songs were often about the triumph of the human spirit.

The period that produced "Allied Forces," "Never Surrender" and "Thunder Seven" was when the band was at its peak in the studio.

"We were in a zone for those three albums," Levine said. "We had our own studio and we didn't have a budget problem, so we could make a lot of demos and try things out. That gave us the one-up on the recording process, and we matured as songwriters. That period record wise and show-wise was solid."

The live show was ever evolving, each year featuring a larger Triumph sign and larger banks of lights, lasers and pyrotechnics.

"We used to describe effects by their NGF, or 'net gasp factor.' They had to make you gasp; it had to be something that had an impact," Levine said. "We were clever that way, in that we designed things that actually worked and we kept updating things. We started as a band that played high schools and we always invested back into the show.

"It wasn't cheap, but we didn't have gratuitous pyro. We used them to make the show or the song better; we didn't just blow them off whenever. Before any bombs went off, we dimmed the major lights to make your pupils go big so your pupils would get big and when the pyro went off you would say 'holy crap, what was that!' That created a major impact."

The shows were not without their mishaps and occasional problems, including the time John Waite of The Baby's started a fight with Triumph's crew when he kicked out some of the lights surrounding the stage.

On another occasion on the "Allied Forces" tour, the police attempted to shut down a Triumph show because of Moore urging the crowd to hold their cigarette lighters in the air.

"Our tour manager wound up getting arrested," Levine said. "They wanted us to stop the show, but we didn't want a riot on our hands, so we kept playing. The problem was that there was a seat burning in the theater, because somebody left a cigarette burning on the seat and there was smoke coming out of it. They thought it was our stuff, but there really was no hazard."

Each member of Triumph had a unique role in the show, and while Emmett's guitar heroics and Moore's drum solo were prominent, Levine was best known for his selection of hockey jerseys and spirited yelling of "Triumph loves you," at the end of the show.

"We had great fans; the audience would do a lot on their own," he said. "It was one of the greatest thrills one could have; just being up there was so incredible. There were nights the fans would sing louder than we were. That was real; Triumph loved their fans, that was from the heart."

Whether or not Triumph returns to the stage, their fans will continue to love them, as well.