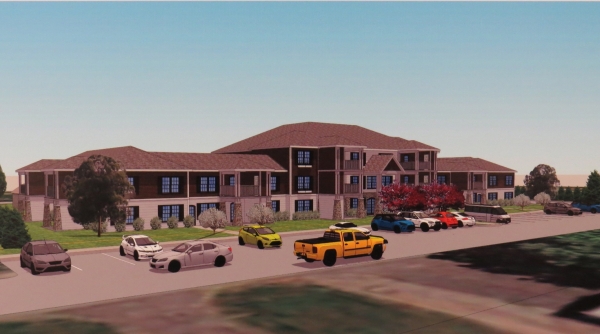 An artist's rendering of James Jerge's plan for 765 Fairchild Place.

If all goes according to schedule, trustees in the Village of Lewiston may opt to vote "Yes" or "No" on the "Paladino plaza" and Fairchild projects at their May 16 meeting.

•If project developers Ellicott Development and James Jerge receive their requested variances from the Zoning Board of Appeals on Thursday, May 5, then ...

•The Planning Board could receive an official second submission from both parties on Monday, May 9. As the Planning Board members have already approved the major details, such as location, size and scope, they could be in position to sign off on the smaller details (design materials, colors; site foliage) and be done with the projects. If this is the case ...

•The Planning Board would send both projects to the Village Board for ultimate approval at the trustees' May 16 meeting.

In addition to all of the "ifs," a public hearing would have to be scheduled for May 16, and all outstanding paperwork would have to be received - including final floor plans, water reports and, just added this week, proof that no living entity will be harmed.

Concerning both developments, a pair of April 25 letters from Village of Lewiston Engineer Mike Marino and Michelle Bodewes, both of Nussbaumer & Clarke, read, "The United States Fish and Wildlife Service has identified one threatened species, northern long ear bat, which is protected by the Endangered Species Act and may be present at the project site. ... A letter from the USFWS stating that the project is not likely to adversely impact the species is needed. ...

"The (state's Department of Environmental Conservation) has identified two endangered rare plants which are protected by NYS and may be present at the project site (neither is listed). ... A letter from the NYSDEC stating that the project is not likely to adversely impact these species is needed."

On Thursday, Mayor Terry Collesano said, "We knew it would be coming to us sooner than later. But I'm just not ready to make a decision on it at this point."

Earlier in the day, Deputy Mayor Bruce Sutherland said it is his preference to review the projects separately. When Collesano was asked if he felt the same way, he, too, said, "I think I'd rather have them separately."

"I'd like to read the minutes ... and go over what happened (Wednesday) night before I make my decision," Collesano said.

Both projects are extremely detailed and of great concern to residents, who have more than once filled the Red Brick Municipal Building gymnasium to voice their opinions.

Orchard Park developer Jerge purchased 765 Fairchild Place (formerly Fairchild Manor nursing home) and nearly 1.6 acres of property in February 2014. He intends to demolish the run-down building and, in its place, erect a three-story Onondaga Street apartment complex designed for senior citizens. His plan calls for between 23 and 28 units - mostly one-bedroom. Down the road, Jerge may opt to build between three and four single-family units behind the complex, on Fairchild Place.

The ZBA will hold a special meeting at 6 p.m. next Thursday to rule on Ellicott Development's request for five variances and Jerge's petition for four variances.

The Planning Board approved a motion in favor of the variances at its April 11 meeting. Members' suggested variances and additional comments can be found HERE.

All meetings will be held at the Red Brick.