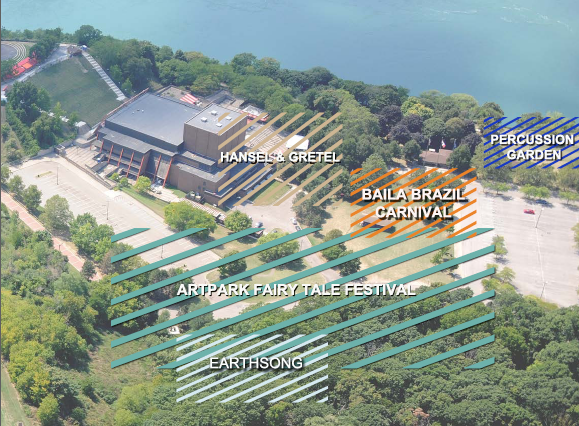 Pictured is an artist's rendering of project locations Artpark & Company has planned for 2016.

Artpark & Company was awarded $100,000 by the Host Communities Standing Committee at a re-vote Friday afternoon. The Town of Lewiston sponsored the funding request. Money will help offset costs associated with Artpark & Company's interactive children's and family festivals and programming.

Artpark & Company has planned an expansion of its Fairy House Festival, a new program titled "Earthsong, Storytelling from the Tuscarora Residents," a percussion garden, a "living laboratory," a theatrical presentation of "Hansel and Gretel," and an outdoor dance carnival with Baila Brazil.

When paired with Artpark & Company's other programming, the venue estimates an economic impact of $12 million.

"After careful review of the proposal we determined that it should not be supported for two main reasons stated below. (Expenses are "operational rather than improvement in nature," and "Artpark's children's programs precede the settlement agreement.") We also believe our position is consistent with the rationale we provided when a similar request was considered in 2010," Paonessa wrote.

He cited paragraph 7.3 of the Host Community Relicensing Settlement Agreement in his letter. Paonessa reiterated these points in person Friday.

In response, Standing Committee counsel Stanley Widger Jr., participating in the meeting via conference call, said NYPA was only quoting the first part of 7.3.

"I think the Power Authority's position that it has to meet the first clause of section 7.3, that's certainly one way for a project to be deemed appropriate, but the Power Authority's position leaves out the fact that co-equal basis for approval is the second clause. That's the clause that (Artpark & Company's grant writer, Bernie Rotella) referred to, which is preceded by the initial clause. ... The next clause is preceded by 'or,' so it's coequal basis for approval. And the second clause has been proposed for the purpose of redefining the Niagara riverfront, promoting tourism, enhancing the environment and advancing the economic revitalization of the Niagara River Greenway within Niagara County."

In terms of Artpark & Company's proposal preceding the settlement agreement (the Host Committee cannot fund projects existing prior to Aug. 31, 2007), Widger said, "The funding for Artpark activities - at least the town's funding of it - is handled on an annual basis; that there was no pre-existing contractual requirement that the town fund (what) was in existence prior to that 2007 date. ... It didn't have a pre-existing, or pre-2007 obligation."

Clark appeared disappointed as she heard Paonessa speak. She said, "We have talked in person about this. ... 'Children's programming,' in general, is way too broad to consider things as pre-existing. If you follow that logic, parks have existed as a concept. Why are we funding parks? ... It's just too broad of a concept generally. Pre-existing children's programming at Artpark were and remain the 'Free Family Saturdays,' camps, 'Music in the Woods.' That's about it. And none of those we have applied for. We have applied very specifically for five very specific programs, appearances, performances and installations."

Clark said some of the proposed activities did not exist last year, nor were the artists available to perform in Lewiston - and they won't return anytime soon, if ever.

Also, she said Artpark & Company did not seek any operational reimbursement.

"We can't just put everything under the headline of 'children's programming.' And if you actually read the proposal, at least half of those (proposed programs) are not for children, at all," Clark said.

"It is not a pre-existing children program," she added.

Lew-Port Superintendent Paul Casseri said he was "confused" why the Standing Committee would consider rejecting Artpark's request when it had provided funding for a temporary ice rink at Academy Park and "projects in our community that extend out into Sanborn, and out into Cambria."

He asked why "this one, which is right on the river," would be denied.

"When the attorney that we pay a lot of money for to sit at this table says that it's consistent with the procedures and protocols, I'm just very confused," Casseri said.

Town of Lewiston Councilman Bill Geiben said, "We unanimously support this (proposal), and we hope it will be passed."

If Artpark's projects or plans are new, Paonessa said, they should first receive approval from the Greenway Commission. That board did not act of Artpark's current bid, as it approved a similar measure in 2010 and allegedly didn't see the need to issue a second approval.

Later in his letter, Paonessa wrote, "We understand, the programming Artpark proposes could provide a great service to the community; however it is not consistent with the overall aim of the Niagara River Greenway Plan and does not meet the criteria for the Host Community Greenway Fund. The project should be funded through another source."

The Host Communities Standing Committee, per its own language, "is responsible for administering and allocating the Greenway recreation/tourism fund consisting of $3 million provided annually to support the construction and/or rehabilitation of parks, recreation and related facilities for the purpose of redefining the Niagara riverfront, promoting tourism, enhancing the environment, and advancing the economic revitalization of the Niagara River Greenway within Niagara County."

NYPA, which also cast the lone "No" vote in March, is providing the funding as part of its 2007 relicensing agreement, wherein the Greenway Commission and Greenway funding were established.