Educator of the Year: Maggie Kennedy

Magdalene (Maggie) Miller Kennedy began her career as an English teacher at Grand Island High School in September 1972. She graduated from Canisius College in 1972 with a degree in English education and earned her masters from Canisius College in 1975. She is the daughter of the late Walter and Christina Miller. She has a daughter and son-in-law, Christina and Tom Donovan, and a son, Richard, and his girlfriend, Carly.

At the high school she has been advisor for many extracurricular activities including Spotlighters, International Club, the Class of 1982, and director of many musicals, including her first, "Hello Dolly!" "Shrek, the Musical" and this year's "Mary Poppins."

She is co-founder of the high school rugby team and was given the Fan of the Year Award by the high school hockey team in 2013. She is a member of the St. Stephen's Parish Players and has been in their last four musicals.

She is thankful to be part of the faculty of GIHS. 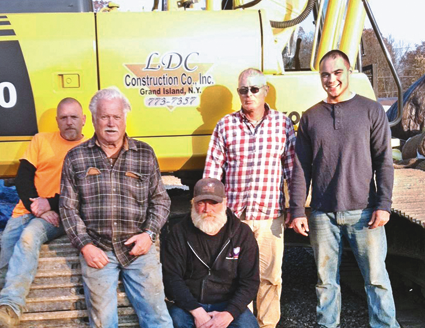 It is owned and operated by the Lyle Dinsmore family. It originally operated out of the family home on Whitehaven Road. In 1981, it bought the property at 1920 Baseline Road and moved its operations there.

The main focus of work from the 1970s through the mid 1980s was water and sewer main construction. They also did site development, including for several large playgrounds and a cemetery expansion throughout Western New York.

From the mid 1980s through the late 1990s, the focus shifted to installing the infrastructure for subdivisions. They installed the water mains, sewer mains, storm drainage, paving and curbing and also retention ponds.

By the early 2000s, subdivision work was drying up and the focus turned to marine work, in particular habitat improvement/restoration work. In 2001, the company completed a major project at Strawberry Island. Since then, they have worked on every island in the Niagara River except Navy Island (which is owned by Canada).

They still do private work such as new docks, repairing docks, installation of boat lifts, breakwalls, etc., but the main focus continues to be habitat improvement and restoration work. Currently they are beginning to work on living shorelines.

The Grand Island Chamber of Commerce will honor seven individuals, organizations and businesses as the recipients of the Citizen of the Year Awards.

The Citizen of the Year Awards are presented annually to businesses and individuals whose contributions have made Grand Island a better place to live, work and play.

Each recipient was nominated by someone from the Grand Island community. All nominations were reviewed by the Citizen of the Year committee and chosen for each particular category.

The 50th annual Citizen of the Year Awards ceremony and dinner will be held Thursday, April 28, at the Byblos.