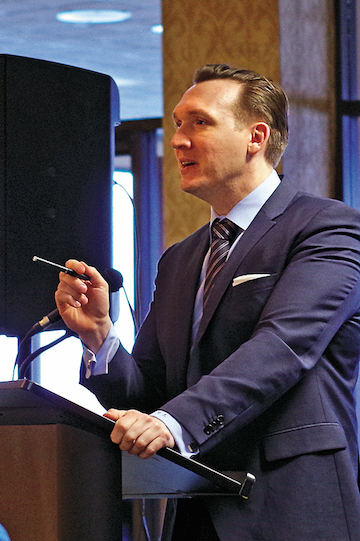 Grand Island Town Supervisor discusses his first 100 days in office during a meeting with the Grand Island Chamber of Commerce Monday at Byblos Niagara Resort & Spa. (Photo by Larry Austin)

Speaking at a Chamber meeting Monday in the Niagara Room of Byblos Niagara Resort & Spa, McMurray described his first 100 days in office and his plans for the near future. He said his speech was the first by a GI town supervisor at the 100-day mark of his term since former supervisor Ray Griffin delivered a 100-day address in 1982.

In discussing both recent accomplishments and plans in the works, McMurray described three areas for development on Grand Island Boulevard: Sprucing up the front door, or roundabout area at the boulevard and Staley Road; add the possibly of a farmer's market at the back door opposite Kelly's Country Store at Long Road; and improving the middle of the town near Town Hall.

"Once you start to beautify those three areas, the rest of it will start to come to life, and that's one of the things I want to work with on the master plan," McMurray said. "If we get those three parts of the boulevard alive, with some pedestrian traffic and some business and some beautification, the rest might fill in and then the property values might go up."

Regarding, the town's front door on Grand Island Boulevard at Staley Road, McMurray told the chamber the roundabout will have a new look by the end of the year. After holding several meetings with the Department of Transportation about the way the roundabout works and looks, McMurray said DOT engineers convinced him the roundabout is "from an engineering perspective, quite sound." He said the flow-through traffic data comparing the current roundabout to its previous iteration as a signalized intersection show the roundabout is "much more efficient." Though he couldn't persuade the DOT to make changes in engineering, he said they have promised him "to do some serious landscaping changes."

McMurray slagged the roundabout, saying, "in the middle of summer, it's a giant bush that's full of weeds and overgrown." He said the DOT has agreed to tear out the dirt center and replace it with river rock, "almost a hardscape surface," to minimize overgrowth and dust. He asked for speed bumps to slow traffic entering the roundabout, but the DOT said no, citing safety concerns. Instead, McMurray suggested, based on his travels in Europe, to plant trees lining the entrance to the roundabout as a means to both beautify the location and slow and calm traffic.

"So they were going to give us ash trees, and I said no, I want white oaks," McMurray said, recalling the trees that once covered the Island.

"It will completely change how the Island feels when you come to Grand Island," he said.

Chamber members bemoaned what they called "blighted" properties beyond the roundabout, mentioning a motel on the south end of the boulevard, and what chamber President Eric Fiebelkorn called a "mess of a plaza" in the town center.

Also in the town center, chamber members discussed possible action on the long dormant gas station at the intersection of Grand Island Boulevard and Whitehaven Road, and McMurray addressed the former Dunlop Building, which most recently had plans as a Holiday Inn Express.

"Sadly, I'm not sure that's going to happen. The numbers don't pencil," McMurray said, noting that he hoped grant money could be found to help the project.

"Having something built out there is better than nothing. We have to try," McMurray said.

One means of addressing property improvements is developing an updated master plan, McMurray explained. To that end, town government advisory boards will take a leading roll. McMurray said, for the first time in years, all the town's advisory boards are active.

"So the Town of Grand Island is represented at Town Hall," McMurray said. Of note, the Long Range Planning Committee has reformed. By town law, the LRPC was required to review the town comprehensive plan every five years, but it has been inactive at least that long, McMurray said. He expressed his pride in calling the LRPC a bipartisan committee. The committee will work on a comprehensive plan that he hopes will keep Grand Island green and unique, he said.

The town will continue to develop the Scenic Woods project, for which a grant promised years ago was dormant, McMurray said, "and no one's been keeping up on it. So I called the Greenway Commission. They said, 'You're going to lose the money. No one's following up. We have no feedback from your town.' "

He pledged to get the matching grant and complete the first stage.

"When I got to Town Hall, there was nothing in my office except for a code book," he explained. "There wasn't one file on my computer. All of it was gone. Nothing."

In an effort to cut costs, the town issued two requests for proposals, one for a legal services provider and the other for an updated town website.

McMurray said the town has had the same law firm for 14 years. In comparing the town's legal costs to the City of Buffalo School District, which has a much larger budget, McMurray said, "Our legal bill was almost twice the amount of the legal bill for the City of Buffalo schools. That doesn't make any sense to me." To control legal costs, he has clamped down on the practice of town employees calling the law firm directly, and he asked the council to present an RFP to law firms in order to solicit more cost competitive services.

The town has narrowed the legal firm choices to three finalists, and McMurray guaranteed the town will see a savings in fees even if the board decides to keep its current legal firm, Hodgson Russ.

"I am confident we will save money for Grand Island," he said.

The RFP for a new town website is the council's effort to develop, by the end of the year or sooner, a new internet presence "that offers more services, that looks better, that truly represents the town," McMurray said.

McMurray's agenda for the near term includes three initiatives:

•Development of a new community center for the Island.

"Some people say we don't need a community center," McMurray said, claiming opponents cite the availability of school district facilities as an alternative to a developing a new venue.

"Those facilities are used every single night. They're full. They're at capacity," he said, adding that the kids who use the district gymnasiums are not necessarily the same as those who will use the community center.

Every community like Grand Island has a center of its own, and Island kids go off the Island to use similar facilities elsewhere.

"On this issue, I have the support of my fellow board members," he said.

McMurray complained about the town's internet access. "Our cable's terrible," he said, calling it "third-rate services."

Better internet is potentially available by tapping into a dark fiber, or broadband, project.

The infrastructure of the future is broadband, he said, and if the community wants to remain competitive, broadband is a necessity.

McMurray told the chamber that he wants to establish a pollution monitoring system on the Island in the wake of the government's $24 million of fines levied in federal court against Tonawanda Coke for years of benzene emissions.

McMurray said the enabling legislation that established tolls on the bridges in 1929 said tolls are to pay for the bridge and its maintenance. Today, Island tolls make up almost $18 million, 3 percent, of the New York State Thruway Authority revenue.

Other communities that have given up land and space, "got something in return," McMurray said. "We get nothing. We get nothing for the tolls."

"So even if you like the tolls, some of that money should be staying right here on Grand Island like the law requires," McMurray said.

He called Islanders an afterthought, and if the town received even 2 percent of the $18 million, it would offset the damage to the Island. He called it an issue worth fighting for.

"Even if you like the tolls, remember how much we're getting ripped off," McMurray said.

In the ongoing debate about trapping of animals on town-owned property, McMurray said the dispute, at its core, is a neighbor issue, where two neighbors amicably and politely deal with their differences.

"That didn't happen. The worst situation is when you have people who are unwilling to bend and they think the town courts and Town Hall is the best way to resolve their problems," McMurray said.