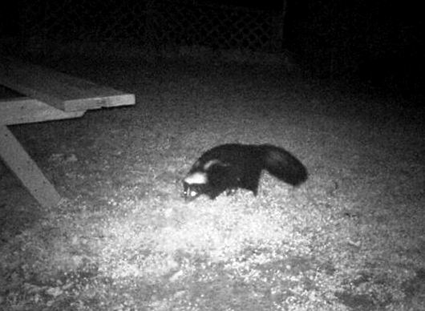 Have you sprayed or rubbed skunk oil musk on yourself lately? I'll bet you have and didn't even know it.

You probably bought it over the counter somewhere - a drugstore like Rite Aid or Walgreens; some fragrance store; or even online. Found mostly in premium perfumes and colognes, the amount of skunk oil in perfume is very, very small, and harmless.

The types of oil and distilled waters found in less-expensive perfumes do not hold the scent like musk does. Musk holds the scent for a very, very long time. Even deer hunters use skunk musk to mask their human odor while hunting.

If a skunk ever sprays you, your dog or someone else, you'll be dealing with a smell that lasts for several days. Not so for perfumes, though, because it is well diluted.

The cure for removing the odor from skunk spray is probably an old wives' tale. It works, but, sadly, it would ruin your pocketbook to get enough tomato juice for it to do any good. And then it will remove it only marginally. The Humane Society of the United States recommends using a mixture of diluted hydrogen peroxide (3 percent), baking soda and dishwashing liquid. So the next time your pet gets sprayed, go the way the Humane Society recommends.

The little guy you see in the picture with this article was snapped one early morning at 3 a.m. with my Moultrie trail camera in my yard. Being nocturnal for the most part, this little fella was out scrounging for food.

They come into my yard and dig little holes in it looking for grubs and worms, only one of their many choices for food. Skunks will practically eat anything, including fruit berries, bird eggs, mushrooms or anything else around, including capturing a mouse or two. Skunks also love cornfields, where they can get at the lower corn on the stalk.

Their mating season is late April into early June. Usually the kits (babies) come four to seven in a litter. They do not hibernate, but become inactive during cold months. Their average lifespan is two to four years in the wild.

If you see a skunk roaming in the daytime, don't approach it. It could be rabid and we all know how dangerous that is. Keep your eye on it and, if it is foaming at the mouth, or kind of staggering, call the SPCA immediately. Let them take care of it. Just don't go near it, even though they are so super cute. If it comes toward you, run like you just robbed a fruit stand.

I have seen some of these guys up close and they are one of God's most beautiful creatures, with their clean-looking fuzzy black and white striped fur and those tiny, little black eyes looking at you.

If you don't see his eyes, you are looking at the wrong end. Get away quick - especially if the tail starts to rise. That means you startled him and you are going to get sprayed. Skunks have a spray range of 10 feet.

I often think about what Ernie "The Turtleman" Brown of the hit Animal Planet TV series said about skunks being not scared of anything. "That's why you see so many dead skunks on the road: They are scared of nothing - not even scared of cars!" Brown said. "Even bears are afraid of skunks!"

So heed the warning.

Skunks do have some predators, like fox and wolves, but most generally they do not attack out of fear from being sprayed. Dogs will attack generally just once, because they learned a good lesson the first time.

In all actuality, skunks do have a good side for homeowners. They will keep your yard free of pests such as grubs, little mice and moles, etc. But, if you want to rid yourself of them, the best plan is a medium-size trap.

There are certain repellents, also. But a repellent is what it says: a "repellent." By using a trap, you can remove the critter and let it go in woods someplace where it will have a better chance of survival, anyway. It can take care of itself.

I have used traps for raccoons but, once in a while, a skunk will show up in the trap. The best way to move the trap is by slowly approaching the trap while talking or singing, so you don't startle it, all the while holding a large towel or a sheet of some kind in front of you. Make sure your shoes are covered, too. If you don't have that towel and sing, you will startle it. Game over for you.

Lay the towel or sheet over the trap gently and pick the trap up and take it away. Skunks don't spray if they can't see their target. When you release it, it will skitter out of that trap so fast it won't even be thinking of you, because he will be running like he robbed that fruit stand. For skunks, you can bait your trap with almost anything, but the best is a can of tuna fish or cat food. The scent will draw them.

If you happen to capture a raccoon, you won't need that towel, but do the same thing. Take him out to nice, isolated woods somewhere and release him. When you approach that trap and pick him up in it, he'll scream and holler and growl at you like he is being murdered in cold blood. But there have been times they just stay calm, all the while keeping their eye on you. That growl sound sounds just like a dog growl. Cool. Keep your fingers clear of the cage, too. Pick it up by the handle.

So now, you tell me, are skunks friend or foe?

Remember, the outdoors is where it's at! Take a kid fishing only on the days that end with a "Y."