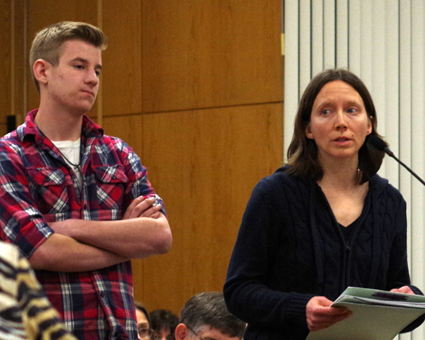 Josh Shipman listen to Nicole Gerber speak at the microphone during a public hearing on a proposal to amend the town's code regarding trapping of animals. (Photo by Larry Austin)

The latest version of a proposed amendment to town code would essentially ban sport trapping of wildlife on town-owned land, prompting supporters of recreational trapping to complain the Grand Island Town Board had caved in to trapping opponents.

The Grand Island Town Board held another public hearing Monday at Town Hall regarding an amendment to the town code restricting trapping on town-owned property. The proposed law would read: "No person shall hunt or trap within the boundaries of a town park. No person shall trap on other town-owned property except in accordance with applicable law and upon issuance of nuisance permit issued by the town board."

The board's addition of the word "nuisance" to the latest iteration of the law was an annoyance itself to trapping supporters.

Town Supervisor Nathan McMurray described the proposed law as one that will ban sport trapping on public land, though New York state law allows trapping on private land, he pointed out. "So you can still trap on Grand Island, just on your own land," McMurray said during the public hearing.

"Land that is open and accessible to the public cannot be trapped on unless it's to stop a nuisance. Now that's a pretty broad term," McMurray elaborated.

The term was too broad for some. Bryce Shipman of Fix Road, whose son Josh is one of the few, if not the only, active trapper on the Island, asked for the board to define "nuisance."

"How do you as a board know there is a nuisance?" he asked. "How will you make the decision and what will that trapper have to provide to you for you to say yes to that permit, because I don't think you'll ever give that permit out."

McMurray said the first step in the legal process is to lay out the principal of the law. He told Shipman the board is "trying to find a middle ground. I know it's not exactly where you want it to be. But there's still some sliver in there where we can get trapping in when it's appropriate under the circumstances."

"You're right, it takes away recreational trapping," McMurray told Shipman. "But we're trying to find a middle ground to get us to a point where we understand this issue better."

The board's latest version of the law tilts more toward the anti-trapping group, which packed the town court room for a public hearing on the matter in March. McMurray said he was public enemy No. 1 with the anti-trapping crowd, and admitted the latest law is not pro-trapping, but a compromise. Shipman reminded the board that two months ago, when the law's proponents, Nicole Gerber and Dave Reilly, brought the issue to the board, McMurray said he was leaning toward doing nothing. Two months later, Shipman said, "you're caving to these people."

The law's genesis began with Gerber and Reilly, a couple who live on Whitehaven Road and whose dog they said nearly stepped in a trap set by Josh Shipman. The issue set in motion a proposal to ban trapping on town-owned land. Reilly said during the public hearing he supported the inclusion of the term "nuisance" in the code, though he found the concept of nuisance wildlife "antiquated and reflects an anthropocentric approach, that puts humans at the center, and I'm not sure that that's a realistic reality when we're thinking about eco-systems."

He called the law "a major improvement over what we had been talking about in prior public hearings. I support the town's position on this."

Reilly asked about a definition of nuisance, the permitting procedure, and what threats to the public on the public land would constitute issuance of a permit.

Diane Evans, saying she was speaking on her own behalf and not representing the town's Conservation Advisory Board, of which she is member, favored the proposed law as a good compromise, recognizing the small number of people taking part in what she called an age-old activity. A permit would offer control over where trapping is done, she said.

"Unfortunately during this process, I think trapping has been portrayed as sort of an ugly deed, which is not necessarily true to all of us. It is a valuable tool for controlling nuisance animals," she said.

Leslie Madigan of East River Road, the wife of Councilman Mike Madigan, said at the hearing that she favors hunting and trapping, but the debate that night on a trapping law was second in environmental importance to an earlier public hearing that concerned the proposed Gun Creek Planned Development District, a project connecting to Whitehaven Road and extending north, which plans 215 residential units and 63 townhouses.

"Isn't that a bigger deal than a couple fur-bearing animals being lost through traps," she asked. "You should be worried about the 100 acres that's being taken away."

James Burnett of Lackawanna echoed Madigan's sentiment later in his comments, when he commented, "land developers, the real nuisance, but I digress."

An emotional Josh Shipman blamed Gerber, saying she was stalking him and videotaping him as he trapped, a permissionless activity he was told was perfectly legal, but that would not be under the proposed law "because one person has an issue."

McMurray told Josh Shipman not to give up hope, to which Shipman replied, "OK, this town, I may as well."

Supporters of trapping defend its use in controlling certain animal populations. Becky Stufkosky, a deputy town clerk, speaking as a private citizen, said she had seen coyotes in her yard, one of which came onto her patio and took her dog, dragging it into the woods. Stufkosky's husband and daughter gave chase and fought off the coyote from the dog, but the family pet later died. Stufkosky gave a graphic account of her pet's wounds and said, "I'm sorry, I'm shaking here, but we have a coyote problem." She turned to Shipman and invited him to her home on Pellanwood Court to help her.

"Come over. Put your traps in my yard."

After closing the public hearing, the board could vote to pass the law next month.