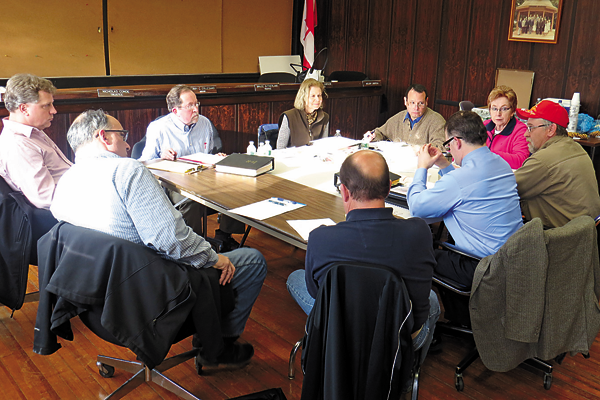 The Village of Lewiston Planning Board met Thursday to review proposals submitted by Ellicott Development and James Jerge.

"The purpose of today's meeting was to solidify the variances that we feel will be needed by the Planning Board in order to allow these projects to go forward as they're currently planned," Chairman Norm Machelor said.

Ellicott would need variances for principal building (identifying all three structures as principal), parking (number of spaces and length), percentage of green space, and drive-thru location.

Jerge's variances include setbacks, parking spaces and detached garages. The garage units on Fairchild Place (currently two rows of eight) require the biggest variance, in terms of proximity to other lots, but are in keeping with the Fairchild Place neighborhood, Planning Board Vice Chairwoman Anne Welch said.

There was talk of reconfiguring the garage units, redirecting them, or making one row instead of two clusters.

Additionally, a fire zone designation may reduce the number of garage spaces.

The list of variances, and further explanation, can be downloaded HERE (Ellicott) and HERE (Fairchild).

Both projects could appear before the Zoning Board of Appeals in May. A public hearing is required with the variance petition.

In addition to the variances, "We got a long memo from the fire department," Machelor said. "They have questions about both developments."

Before Machelor opened the floor to Beebe, he said, "We've been doing this for two years. We've had the fire department involved all along. But this is the first time we ever got anything in text from you - right at the end of the process. So, what's going on?"

Beebe said, "We didn't know we could make any comments yet. It seemed like it was open to the public, but comments from the public weren't being accepted. So, I've been tracking the project."

"We decided that maybe we should make our voice heard," Beebe said.

His checklist can be downloaded HERE.

"A lot of our comments are based on water supply/water pressure, and accessibility to both sites," Beebe said. "And then the consideration to Onondaga Street. What happens when both sites are actually active, and primarily when you have festivals - what kind of traffic problems that creates for us, or any other EMS, or just general traffic flowing in and out of the village?"

Much of the conversation with the Planning Board involved how fire trucks would navigate inside the Paladino plaza, with its various rows of parking and two south-side dead-ends facing Center Street. The turning radius is tight, Beebe said.

Meeting participants also questioned the logic of bringing fire hoses from north to south, up the slope within the plaza, as the Ellicott plan suggests. The main concern was a decrease in water pressure.

The chief worry with the Fairchild project was access to the apartment complex. Beebe said its south side is obstructed by parking on the east and west sides.

Machelor said several of Beebe's points went beyond the Planning Board's purview. He suggested further conversation with the developers.

Marino said Beebe's comments would be sent to Ellicott and Jerge.

Beebe was invited to attend the Planning Board meeting when the project designers submit their respective second submissions. The board suggested that could happen next month, but will probably occur in early summer.

The Planning Board is expected to vote on sending its variance recommendations to the ZBA at its April 11 meeting.