Spring is in the air and it's getting time to begin planning for summer.

One neat event in coming months is the Great Contraption Race, a great on-river happening with the proceeds going to benefit the programs of the Lewiston-based It Happened to Alexa Foundation. This year's GCR will take place on the morning of Saturday, July 30, in the lower river, with participants embarking from the Lewiston sand docks near The Silo Restaurant and floating downstream to the south boat launches at Fort Niagara State Park.

Over the past winter, the Great Contraption Race committee met twice and is mulling and re-tweaking a number of items intended at making this year's event all the more accessible to the community and area residents to enjoy.

"Big changes this year," reports Sandra Lahrache, who was recently named acting executive director of the IHTAF. (See related story on Page 3.) She reports, thus far, this year's GCR will see the following:

•The race will again see its launch at Lewiston Landing and conclude at Fort Niagara, with approvals already secured at both locations. In addition, a mid-point emergency exit for race participants has been approved at Joseph Davis State Park.

"This year, there will be an emergency exit at (a) Joseph Davis State Park ramp as a precautionary measure," Lahrache said, noting race safety committee members will be stationed at this location.

She said race organizers have submitted paperwork with the U.S. Coast Guard and, likewise, are looking at some modifications.

"This year, we may include single tubes. I have included it on the Coast Guard application," Lahrache said, adding that, thus far, it was not seen as a major concern. "However, we are under no obligation to include them, even with Coast Guard approval."

Lahrache said, should the single tubes be approved and organizers opt to include them, they would be limited to 12 in the race with the requirement "they must be elaborately decorated."

•The pre-race dinner cruise of past years is now history.

"We will not be having a Sunset Cruise this year and have opted to have a gala at a later date," Lahrache said. She said a new "Raising the Stakes Gala" will be in its place and is scheduled for Saturday, Oct. 1, at the Sheraton at the Falls.

"This is a fantasy casino fundraiser presented by Uptown Entertainment," Lahrache said. "The event will have a VIP reception with an open bar and a tutorial on how to play the games."

Included will be poker tables, craps, roulette, a ring toss with wine bottle and "so much more," Lahrache said. She added the event is also expected to feature a variety of baskets, plus auction and various high-end raffle items, with proceeds going to the GCR program.

•The race "After Party" has been eliminated from the state park area above the Fort Niagara south boat launch due to a number of planning and logistical concerns, ranging from securing permits to manning food and beverage stations. Lahrache said Fort Niagara State Park officials have given approval for race participants to park their contraptions and tow vehicles at the south gate of the park near the soccer fields.

As far as an alternate site for the post-race event, Lahrache said Falkner Park in Youngstown is being pursued.

"We met with Youngstown business owners, Mayor Raleigh Reynolds and Trustee Stu Comerford," she said. "The plan is to host a party at Falkner Park and invite local businesses to set up food and beer tents, have live music and display the three top Great Contraption Race winners. GCR participants will have food and beverage tickets that will be honored at these tents."

Lahrache said the time frame being considered for the event is from noon to 9 p.m. on race day. "Spectators and visitors of the race are welcome to join the festivities throughout the day and evening at this party," she said.

At this time, planning for the race continues. Lahrache said a new website is expected to be live shortly and, currently, she is looking for volunteers for the race, safety and gala committees, and to work on campaign sponsorship.

Great Contraption Race organizers have been meeting on a monthly basis and an April get-together is expected. 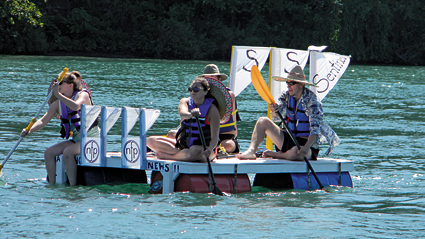