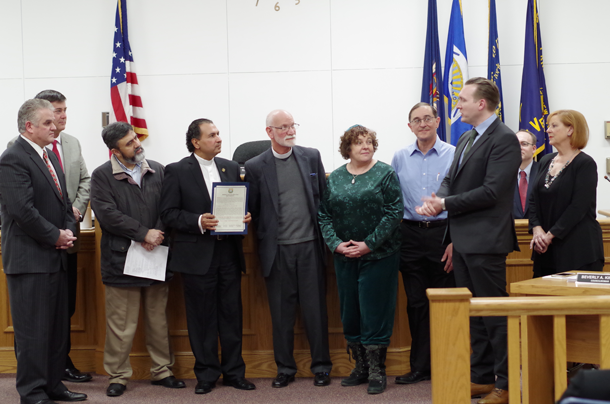 The vision of a 19th century figure from Grand Island history will receive annual remembrance for his vision of an Island of hope and tolerance.

The Grand Island Town Board issued a town proclamation at its regular meeting Monday, March 21, to proclaim Sept. 2 of every year as Mordecai Manuel Noah Day on the Island.

According to "Cinderella Island" by Rob Roy MacLeod, Mordecai Manuel Noah was a New York City politician who persuaded Samuel Leggett to purchase 2,500 acres of land on the Island on which to found Ararat, a city of refuge for Jews who faced persecution in Europe. The cornerstone of Ararat was to be laid on Grand Island Sept. 2, 1825.

The Mordecai Manuel Noah Foundation of Grand Island requested a proclamation from the Grand Island Town Board "to honor his great heritage" and to propose the move of the historic Ararat cornerstone from the Buffalo Museum to Grand Island.

In making the proclamation, the board said the day "will inspire solidarity with Jewish people, religious liberty, harmony, and shine in the world an eternal sign of grace and mercy of God in whom we trust."

Town Supervisor Nathan McMurray said Noah was "a diplomat, a playwright, an intellectual, a scholar" from Island history who had a vision to create a utopia on the Island.

"It's an interesting part of our history and it's something we wanted to honor and recognize as we try to make Grand Island a place of empathy, religious tolerance and refuge for people who are displaced and downtrodden," McMurray said.

In accepting the proclamation, Michael Paul Barsoum, chairman of the Mordecai Manuel Noah Foundation, said his heart was filled "with love and attachment to this place, to this Island, when I knew the history of it" and Noah's purpose for it.

"And that purpose is so noble, to be a city of refuge for people who are suffering or persecuted," Barsoum said.

"In today's world, we are in so much mourning for that utopia, to create an Island of harmony, of safety, of love, of tolerance, to accept other people," he said.

Barsoum was joined in accepting the proclamation by Nasir Khan, president of the Ahmadiyya Muslim Community, the closest mosque to the Island; the Rev. Earle King of St. Martin-in-the-Fields Episcopal Church on Baseline Road, Rabbi Dr. Ellen Franke of Temple Beth El in Niagara Falls, the closest Jewish congregation to the Island; and Robert Gogel of Crossriver Ministries of Grand Island.

"The group that you see today represents the vision of Mordecai Noah and the Island, that we all work together, we all bring peace, and we all proclaim an Island of Hope," Barsoum said.

He said the proclamation is a burst of old history "that is living in each one of us, each one of us that chose this place to be a home." Though Noah never set foot on the Island, his vision is alive today, Barsoum said, expressing hope that Noah "will see it from the other side of existence through you and through us."