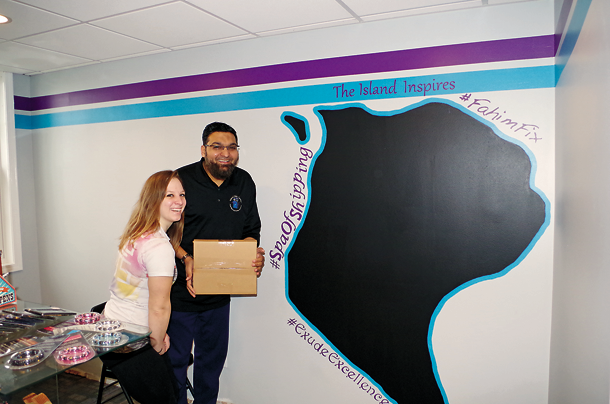 Fahim Mojawalla likes the finished product of the new "selfie wall," created by Theresa Covatto of Grand Island, that is a part of the expansion going on at his business, the Island Ship Center at 1879 Whitehaven Road. (Photo by Larry Austin)

Just in time for their company's 10-year anniversary, Seema and Fahim Mojawalla of the Island Ship Center are near completion of a major business expansion.

The Mojawallas will cut the ribbon and celebrate 10 years in business and a "grand re-opening" of a remodeled Island Ship Center on Tuesday, April 5, at 11 a.m. Dubbed the "spa of shipping," the businesses expansion involves a 1,500-square-foot addition (50 by 30 feet) that will make the building "just under 3,000 square feet when it's all done," Fahim Mojawalla said.

The physical expansion of the building will provide for a corresponding expansion of services. The business will offer both private and digital mailboxes, furniture and freight shipping, international shipping options, and secure shredding and document destruction.

For Fahim, the seemingly overnight success is 10 years in the making from when he started with little more than an idea.

"Ten years, it's like yesterday," he said. "I started with two things: a vision and a smile. And 50-cent faxes."

The vision was to provide a service that follows "a spa model," he said.

"In the immortal words of Michael Jackson, 'The way you make me feel.' That's what this business is all about. Everything's secondary. Shipping, packing, it's all secondary," he said. "But if you feel good and you come in here, then everything else follows. Everything. That's the whole model."

Follow the model and financial success will follow, he said. "I spend more at Starbucks, knowingly, because they make me feel good," he explained.

To make the ordinary extraordinary is part of the spa experience, Mojawalla said.

"Howard Schultz put life back into coffee and he got Starbucks. I'm doing it for shipping," Mojawalla said.

"I want this to be the Ritz Carlton of mailboxes," he said of the expansion. "When you come in, it should be epic. That's what my goal is. It has to feel good." 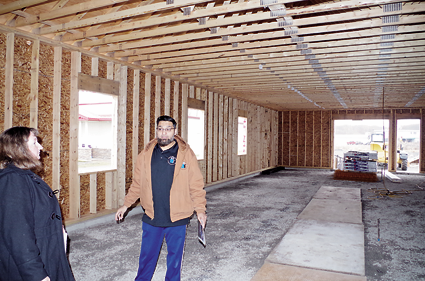 Fahim Mojawalla, owner of the Island Ship Center, describes to visitors the expansion going at his business, located at 1879 Whitehaven Road. 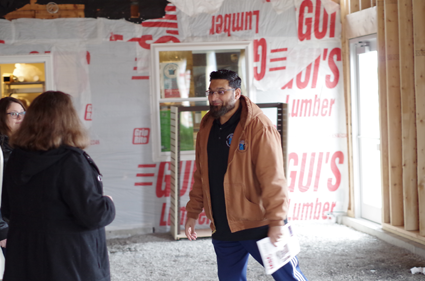 Workers were on schedule to finish the roof this week, and flooring will be done next week, he said. The expansion will create a 24-hour access mailbox center in the back with entry through a side door.

The business expansion is already paying dividends. Once complete, the private mailbox room would have room for 1,000 mailboxes. "We're starting with 425," he said. "I already have a waiting list. That's the demand."

The Island Ship Center's customers are "military, students, personnel, ex-patriots, Canadians, people who are worried about identity and package theft," Mojawalla said. The 24-hour access will save customers valuable time as well.

"When you get mail, you'll get texts and email alerts, so you don't have to worry if you've got mail in your box," he said.

The expansion in the back of the store and the remodeling inside will provide more space for customers and a quicker business transaction, with two cash registers in front and a wireless station in the back for dropoffs.

What can they ship? A bigger loading dock for freight will make it easier to ship large items, like furniture, and as Mojawalla said, "anything except your ex or your mother-in-law, we can ship now."

Fellow Islanders have had a hand in the expansion. Using Islanders for the work is in keeping with Mojawalla's philosophy that if you're doing good for people in the community and helping them get what they want, they will return the favor somewhere down the line. Mojawalla said he worked on the plan for 18 months with his landlord, Larry Playfair.

"He's an awesome landlord," Mojawalla said. "If it weren't for him, I wouldn't be here."

Vince Colan of VMC Construction worked on the addition and Chris Hartwick of Absolute Building Services Inc. remodeled the front of the building. "We had the best crew on Grand Island," Mojawalla said. "Both Islanders, both awesome."

Wednesday, another Islander, Theresa Covatto, was painting the new "selfie wall," a perfect background for a quick photo in the store. Mojawalla is on the leading edge of social media marketing.

"Needless to say, I'm super-super-excited," Mojawalla said of the expansion.