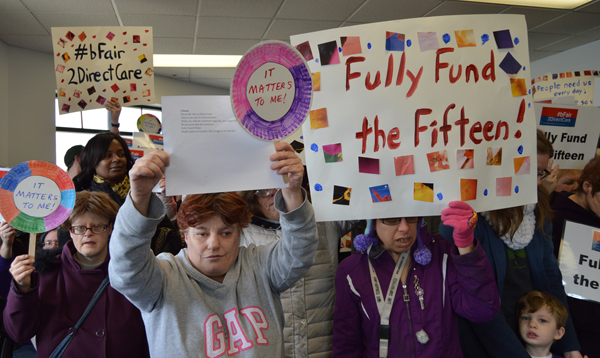 Shown is a scene from the rally at Empower.

On March 18, members of local agencies, direct care professionals and people with developmental disabilities came from across Niagara County to Empower Children's Academy in the Town of Niagara in effort to make their voices heard in Albany as fiscal year 2016-17 state budget negotiations come to a conclusion.

"Today, we are shining a light on the implications of Gov. Cuomo's proposal to increase New York state's minimum wage to $15 per hour. All across New York state over the last two weeks, people have sent a loud and clear message to Gov. Cuomo and state lawmakers: Please provide the state funding to back up those increases for people who work with people with disabilities, the elderly - our most vulnerable," said Jeff Paterson, Empower CEO.

The rally was organized by local not-for-profit organizations serving people with developmental disabilities in the Niagara Frontier as part of the "#bFair2DirectCare" campaign.

The #bFair2DirectCare campaign participants are calling on Cuomo to include funding in the state budget to allow them to provide corresponding raises to direct support employees.

The campaign supports Cuomo's proposed minimum wage increase, but also emphasizes that 90 percent of the funding for support for people with developmental disabilities comes from government sources. They would need increased funding to avoid potential service reductions, layoffs and denial of services.

Kellie Spychalski, executive director/CEO of Opportunities Unlimited of Niagara, said, "Niagara County service providers, Opportunities Unlimited of Niagara, Empower, and Rivershore currently support 1,642 individuals with intellectual and other developmental disabilities. Together, we employ more than 750 dedicated, skilled and extremely hardworking direct support professionals. It is only fair that the people who are truly at the crux of providing the vital supports, which allow people to live, learn, work and play alongside their peers in the community, be appropriately compensated for the critical work they do. "

Other rallies for the campaign have been held in Buffalo, Suffolk County, Rochester, outside of Cuomo's Manhattan office and in Albany. 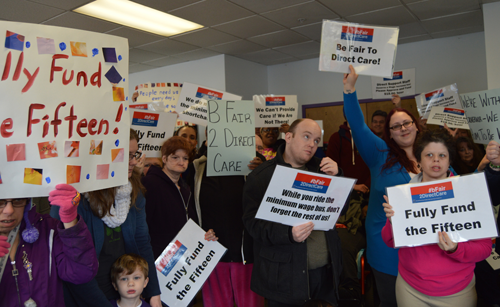 Shown is a scene from the rally at Empower.