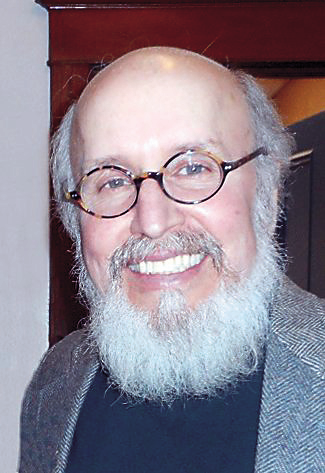 Chamber Gala: Timothy Henderson is Village of Lewiston Citizen of the Year

A lifelong resident of Lewiston, Henderson grew up and still lives in the family home on Oneida Street. As a young boy, he attended the Red Brick School (now the village hall) and sat behind JB Scovell in the old Presbyterian Church. Much of his history is as colorful as his personality, coming across many great characters Lewistonions would know well.

He delivered the Niagara Gazette to 90-year-old John Brasser, who knew Josiah Tryon, and was chased off of Oak Hill by Nina Starkweather herself. He was always keenly aware of the Lewiston's rich history and spent entire days exploring the woods near present-day Artpark, often being chased by Eleanor and Barney Waldron's dogs.

Henderson is a well-known leader in our community with his involvement in environmental advocacy and the Lewiston Council on the Arts, but many know him as Josiah Tryon, the historical figure who led slaves to freedom. Thousands of students and visitors have been fortunate to learn about Lewiston's rich history through the characters Henderson has portrayed. Countless hours of research and work have been done by him and the Lewiston Council on the Arts to create authentic and historically correct live portrayals of Lewiston's past. Henderson has also played a character named Jonathan - a victim of a bad epidemic - and created a character from the poetry found under Jonathan's bed where he stayed at the Frontier House.

Henderson is a poet and writer, with a knack for finding the historical pieces that are key to the development of Lewiston. For the past 23 years, he has been on staff at Lewiston Council on the Arts and has helped put Lewiston on the map for the portrayal of Lewiston's history in countless productions of the Marble Orchard historic walking tours and ghost walks. The program grew from a play Henderson wrote for the 175th anniversary of Lewiston celebration that was held in the cemetery located next to the Presbyterian Church, and it took off after that.

Henderson has been an environmental activist for most of his adult life. Apart from two tours of duty in Vietnam and climbing mountains all over the world, the environment is his passion. As founder of the group Residents Organized for Lewiston-Porter's Environment in the 1980s, he led a successful fight against the siting of two hazardous waste incinerators near the Lewiston-Porter School District. R.O.L.E. has evolved into the current group Residents for Responsible Government.

His fight for our environment continues to this day.

"I have always felt that there are things worth fighting for: If we can preserve our history and also
protect our future, then we can appreciate how great it is to live in the present," Henderson said. "It is no accident that thousands of people love coming to Lewiston for our wonderful festivals, free concerts at the gazebo and great restaurants. They only get to visit, but we're the lucky one. ... We get to live here!"

Henderson loves contributing to the quality of life for residents and visitors to Lewiston. His work has helped to make the region a cultural destination that is conscious of the historical value of a community. He believes our past is worth celebrating. Henderson strives for preserving what was good about history, honoring the past and keeping the stories worth telling alive.