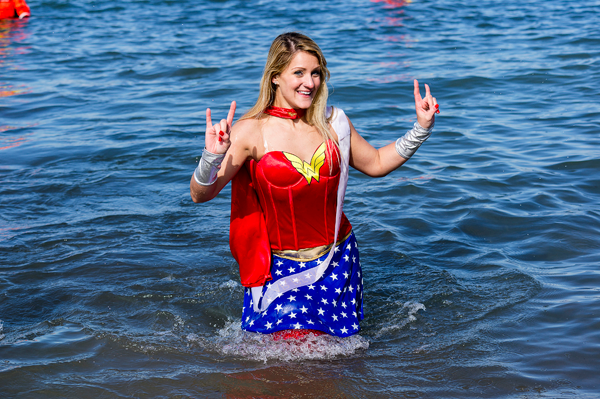 Jen Cammarano is the first to take a dip in Lake Ontario Sunday after being named Polar Bear Queen at the 2016 Olcott Lions Club's Polar Bear Swim for Sight. (Photo by Wayne Peters)

All hail the Polar Bear Queen!

The 29-year-old was selected from among a group of other young women as best representing Lions Club's Polar Bear spirit.

Cammarano was making her first plunge in Lake Ontario, but she had attended a previous Swim for Sight, which is part bacchanal and part fundraiser for the Olcott Lions Club's ongoing charity work.

"I never expected to walk away as the Polar Bear Queen," Cammarano said.

Her friend, Katie Bates, whose grandfather was a Lions Club member, organizes a yearly bus trip of Grand Islanders to Olcott for the Swim for Sight. This year, a busload of 29 from GI made the trip, with many dressed up as superheroes.

Last year, Cammarano went to the Swim for Sight and saw first hand dozens of participants take a turn jumping in the lake.

"I'm like 'That's crazy, I'm not doing that,' " Cammarano recalled. But Bates said, "You're going to go in next year."

More than 100 hearty souls donated money to the Lions Club for the chance to jump into Lake Ontario Sunday. Cammarano said random people in Olcott, seeing her dressed as Wonder Woman, encouraged her to join the pageant, including a woman at the registration table who took her donation to the Swim for Sight and decided to write down her name to enter the contest.

This isn't quite the Miss America pageant. Cammarano said the contest consisted of a promenade down to the beach with the other contestants to line up for pictures. The pageant does away with any pretense of judging for things like talent, or poise, or community service, and crowns a queen based on spirit.

She said Tuesday she was "still kind of shocked that I won. I was the oldest one lined up with these little young things."

Dressed as Wonder Woman, she also wore more clothes than her competitors, who she said were wearing bikinis.

And as far as duties of the Polar Bear Queen, "There really aren't any," Cammarano said. She did get to go in the waters of Lake Ontario first, and was presented with a sash and a fake bouquet of flowers.

The weather was milder than the 2015 Swim for Sight, she said.

"Last year they had to excavate all the ice" to make a beach for the swimmers, Cammarano said.

"It was still a ton of fun. It was great," Cammarano said of her frigid dip in the water. "It was just very exciting, but very cold."

After her pageant and inaugural dip in the lake, she went back to the bus right away to change from Wonder Woman back into Jen Cammarano with regular, warmer clothes.

Cammarano works two jobs, one off the Island and the other at the Rose Liquor Store.

Swim for Sight participants donate money for the privilege to jump in the lake, and since Islanders heard the news of her crowning, Cammarano said she's getting a lot of positive feedback about raising money next year. She said one of her customers at the Rose Liquor Store volunteered to financially support her second jump in the lake.

As for defending her crown next year, Cammarano said, "I'm not too sure about that, but I'll make an appearance." 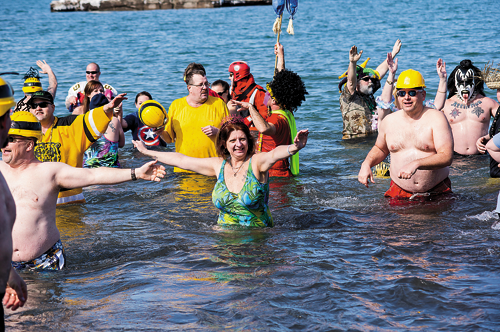 Some 460 swimmers, most dressed in costume, partook in the 47th edition of the Olcott Lions Club Polar Bear Swim for Sight this past Sunday at Olcott Beach. The day was sunny, the lake was mostly ice-free, and the air temperature was in the upper 30s, making it easy to enter and exit the water this year. A massive crowd came to watch the swimmers and to enjoy all the food available on East Main Street.

The day started off with the tailgaters and a tug of war between local volunteer fire companies, followed by a chili cook-off between the fire companies and plenty of socializing on the streets of the hamlet. Sponsored by the Olcott Beach Community Association, first place in the cook-off went to Pekin while second place went to Olcott. Tug-of-War winners were the combined team from the Olcott/Miller Hose companies, with Lewiston No. 1 Volunteer Fire Co. taking second.

Soon after, swimmers in all types of dress and varying states of sanity descended into the chilly lake waters, with monies raised to benefit Lions Sight programs and community organizations.

Olcott Lions set a fundraising goal of $25,000 and are still tabulating the totals.

Following the Swim For Sight, visitors remained in the hamlet where members of local Lions Clubs were on Main Street serving up all sorts of great food.