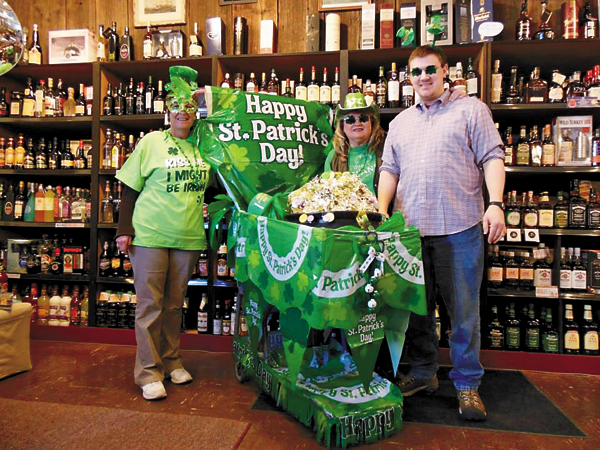 From left, Diane Melloni, Cheryl Butera and Rich Jagow with the shopping cart float from the first O'Riordan Parade.

St. Patrick's Day certainly serves as a "rite of spring" in these parts, seemingly more than anything else. And it gets into full force next week with celebrations throughout Buffalo-Niagara.

Up in Youngstown, which, by the way boasts a very high percentage of the Irish among its nearly 2,000 inhabitants, the community, its residents and a host of businesses will again celebrate St. Pat's in style.

This Thursday, March 17, plans call for "a full-fledged St. Paddy's Day Party" at Somewhere - a local enclave that seems to stand out above others when it comes to Irish shenanigans.

And come next Saturday, March 19, look for the fifth annual O'Riordan St. Patrick's Day Parade - with its green decorated shopping carts and all - taking over Main Street in the village.

Two big Irish events in one little village - what could be better? Only in Youngstown, as locals say.

As noted, the annual O'Riordan St. Patrick's Day Parade will again be a major part of the celebrations. It's presented by the Youngstown Business and Professional Association and co-sponsored by the Village of Youngstown.

Led by re-enactors from Old Fort Niagara, the parade starts at noon and will run from Main and Hinman streets, north to Falkner Park. The route then reverses with stops at the Ontario House (Stone Jug) and the nearby Mug and Musket Tavern. The village celebrations then continue all day.

It's an event best described as one of spontaneity, said YBPA President Cheryl Irish Butera, who is organizing the parade with Diane Melloni of Melloni's Market Place and Dotty Riordan, wife of the late Mayor Neil Riordan.

"It's a welcoming (affair) for anyone, anyone who wants to participate," Butera said.

She noted the small parade, held in honor of former Mayor Riordan, had modest beginnings five years ago with just one float - a shopping cart.

"Now there's many," Butera said. And interest in this event continues to grow. "Everyone gets very enthusiastic about this parade." 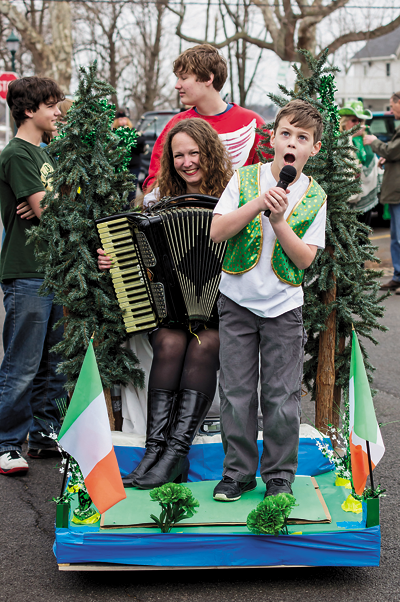 As to participants this year, in addition to Old Fort Niagara, the list includes the MacKenzie Highlanders, the VFW, Youngstown Lions, the Village of Youngstown, Youngstown Volunteer Fire Co., the Porter Historical Society, Amy Roush of the Youngstown Dance Shop, the McCarthy School of Irish Dance, numerous businesses and more.

A rain-or-shine event, area residents are welcome to celebrate and be a part of the O'Riordan St. Patrick's Day Parade.

"Youngstown is going green on March 19. Come out and show off your shamrocks," Butera said. All village businesses will be open and "there will be partying from noon until the wee hours." 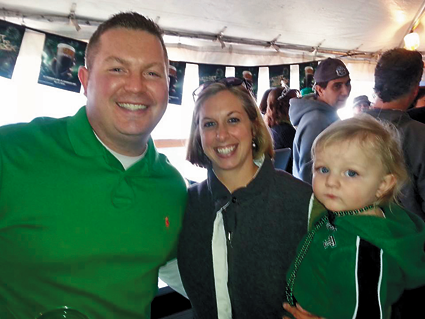 Scenes from the first St. Paddy's celebration at Somewhere.

And what about that party at Somewhere? You ask.

Stack said that, for the second year going, Somewhere will offer St. Patrick's Day visitors a day of fun with no worries. How about no-charge, courtesy shuttles to and from the Blairville Road pub, a 5,000-square-foot heated tent on the grounds, Irish drink specials from 3-11 p.m., catered foods including corned beef sandwiches with the fixins, and authentic Irish entertainment featuring a Falls favorite, The Irish Wake Band?

Stack said patrons would be able to enjoy the day with ease, as the shuttles from Niagara Majestic/Grey Line Tours will pick up visitors from designated locations as well as from individual homes.

"It's better than people driving. People come here, have a good time and make it home with a good time," he said.

"We had about 1,000 people here; the shuttle ran continuously - nobody was left stranded. A lot of cars were left here in our parking lot and we provided a shuttle to get home," Stack said. "We're great with that, we'll provide security here for the cars, if they're left here. We'll make things a little bit safer, that's all."

In addition to some Irish beverages and eats catered by Country Joe, aka "Joe O'Jacubowski," patrons will experience some of the best in Celtic music, said Irish Wake member Steve Dillon. His eight-piece band will feature a host of local names, including Jennifer Pauly from the Niagara River Region Chamber of Commerce plus Tony Petrocelli and Ray Barry from Lewiston Music.

"It consists of very good local musicians, all music teachers, all very excited about doing this. They've never done Celtic music before this," Dillon said.

"This (St. Patrick's Day) is a tradition in my family for years," he said. "My father had Irish bands. We played in his bands (in) Niagara Falls as part of the Blarney Bunch - we played with him for years - all the armory parties; all the parties at the (Niagara Falls) Convention Center."

He noted, with pride, his father Bernie Stack, was a past state president of the Ancient Order of Hibernians - the first selected in the state to serve out of the New York City area.

As to the band's selections? Well, Irish music, of course.

"We have been around Irish music for a long time, we know Irish music," Stack said.

"The third set is more of the modern, more popular Irish music, like 'Dropkick Murphys, Flogging Molly, the rock-induced Irish music. So you can see the music progresses through the night."

They invite all to come out and enjoy themselves, celebrate the day and, best of all, arrive and get home worry free.

"We want it to be safe, we want people to get here safe, be home safe, have a great time," Stack said. "Everyone is welcome to stop by. This should be one gigantic party."