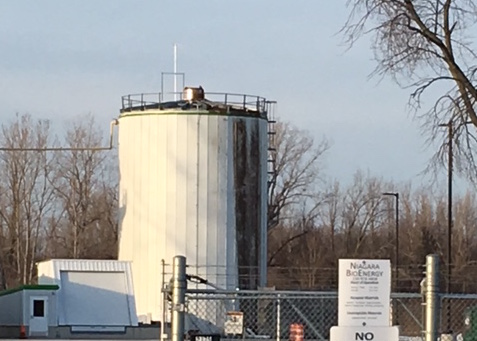 Wheatfield resident Monica Daigler "Was driving by with my family and noticed the (Quasar Niagara BioEnergy digester location) gate open after hours. We also noticed black stuff down the side of the feed tank," she said. Daigler submitted this photo to the Tribune.

Wheatfield resident Monica Daigler was driving by Quasar Energy Group's Niagara Bio Energy facility on Liberty Drive Sunday when she saw "black stuff (coming) down the side of the feed tank."

Daigler called the Niagara County Sheriff's Office after she was unable to get in touch with the state Department of Environmental Conservation. Soon after, police, fire, DEC representatives and other emergency personal were at the scene.

Frontier Volunteer Fire Co. Fire Chief Bruce Mack was notified of the incident when a state trooper called for further assistance upon discovering the overflowed substance created a pile on the ground.

"When I arrived, you could see that something had come from out of the storage silo where they store the product," Mack said.

His crew placed absorbent pads on the material to ensure it did not migrate beyond where it had already been discovered.

"Then we made the required notifications under the hazardous material act, which brought out the DEC's spill response and other agencies that take an interest in those types of situations," Mack added.

In an email Monday, the DEC spill response staff stated, "The spill consisted of a foamy food waste substance leaking from the top of an on-site anaerobic digestion tank and collecting as foam at the base of the tank. The spilled material was contained to the gravel area immediately surrounding the tank. No environmental or off-site impacts were observed as a result of the spill and the material released is classified as a nonhazardous, food waste substance."

Town of Wheatfield Supervisor Robert B. Cliffe, who was also at the scene, said in an email Monday state police officers were able to contact Nate Carr, biomass account executive at Quasar Energy Group.

"Nate assured us that there were no biosolids (human waste) in the feed tank, that they had not used any for almost two years," Cliffe said. "The materials were primarily oils, grease and fats from restaurants, with some other materials mixed in (such as aging dog food). I can confirm that there was very little which I could smell, and I was right there."

In a phone interview Monday, Carr said the black substance was "blended feed stock ... from food materials and fats and grease that are derived from vegetables and animals."

Carr said the company is "still evaluating everything and sort of forensically figuring out exactly what happened. But for right now ... it appears (we) had a level sensor in the tank malfunction and so our sensor was telling us, you know, we had a half full tank and the reality was it was a full tank. And so what had happened was, as we put a little bit more material that we received into that tank, it pushed the very thick, buttery-type stuff on the top of the tank out of the pressure relief valve."

He also said the tank already features a backup collection system that is supposed to gather anything that comes out of the top of the tank. However, the buttery-type material at the top had become so thick it was not able to flow through the piping system necessary to complete the collection process.

"So instead, it came out of the relief valve itself," Carr said. "Nothing migrated off site, nothing migrated more than 6 feet away from the tank. And it was all contained. There was no worry of it running off anywhere. The material is completely nonhazardous. It presented no risk to anybody. ... There's absolutely no danger to the public with this event whatsoever."

Quasar began cleanup efforts Monday, removing the substance from the top area of the tank, as well as the pile that had reached the ground. The entire cleanup process is expected to be finished today. The sides of the tank will be power-washed and "The material that we picked up off the ground - we excavated the gravel that was underneath of it, as well, and we are loading that into containers to take to a landfill," Carr said.

Some residents said they are concerned about another malfunction, such as a spill, happening in the future.

"There isn't a risk of it overflowing again, because we've taken the level of the tank down," Carr said. "We've moved material from that tank into the digester, which there's plenty of space in the digester. And so we've ensured we have headspace there.

"You know, it's not going to happen again."

"We're really just in the preliminary phases of figuring out exactly what needs to be done, as we just recently determined what happened; but what I can say is that we're obviously going to replace that malfunctioning sensor," Carr added. "We're going to install redundant backup sensors, as well, and likely institute a manual inspection to be a safeguard to the electronics ... to those sensors."

Carr said a company employee would also be manually checking the tank, instead of only relying on the sensors.

"At first blush, there does not seem to be a problem other than a costly cleanup for Quasar," Cliffe said. "They will be expected to pay Frontier for the materials they used up in containing the spill."

Cliffe also said he "informed all (Wheatfield Town Board) members of the problem (Sunday) and made a few suggestions. Today (Monday), Matt Brooks is working on these items; I expect to be sending out several requests for further information from DEC and from Quasar."