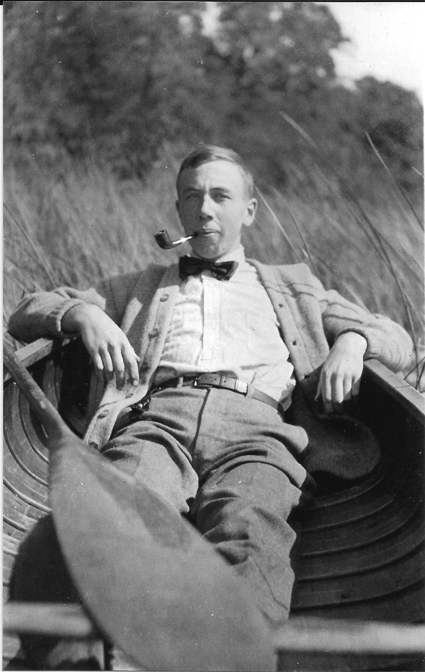 The late Roswell Pfohl of Grand Island relaxes in a canoe in this family photo. He was in his 20s or early 30s at the time. Pfohl, who died in 1972, was a prominent area architect and a member and historian of the Buffalo Launch Club. (Photo Courtesy of Peggy Bauman)

Roswell Pfohl: The man, the architect, the boater

•Taken from the Feb. 19 Islandwide Dispatch

Roswell Pfohl didn't have a lot of time for leisure activities amid a busy career as an architect, according to his daughter, Peggy Bauman. But what time he did have, he loved to spend on the local waterways and at the Buffalo Launch Club.

"It would just be on the weekends, and he would have to make the time to go fishing. We would go sometimes as a family," Bauman said. He had a wooden boat, a Lyman with a 25HP Johnson outboard motor. He availed himself of a local guide to get to the best fishing spots on the Niagara River and Lake Erie. "They would go for bass and pike," Bauman recalled.

He also loved a good yarn. So collecting, recollecting and recounting the life and times of his club was in his wheelhouse.

When he began a series of history articles in the BLC newsletter in 1932, the club, itself, was beginning a new chapter, as he noted in his foreword.

Practically all the club's original records had been lost in two fires - one at downtown offices where most of them were stored, and one that had razed the clubhouse the previous summer. "I realized that if a true history of the club were to be written, it must now be obtained from those who were active during the early years of its life," he wrote.

Ironically, many of the club records he subsequently collected were almost lost to future generations, as well. A number of documents were stashed away in a barn on his property, only to be discovered more than 40 years after his death in 1972 by a contractor working to demolish the barn on Pfohl's property. It was a fortuitous find for the Launch Club, said Heritage Committee member Tom Frauenheim.

Pfohl had a distinguished, 46-year career as one of the Buffalo area's foremost architects and engineers. He was senior partner of the firm Pfohl, Roberts and Biggie, with offices at 185 Niagara St. in Buffalo. "His big thing was schools," his daughter said. He and his associates designed or renovated about 80 schools in Western New York, including the designs for Kaegebein Elementary, Huth Road Elementary, St. Stephen School, Connor Middle School and Grand Island High School.

"At this time, after the war, all the children were being born, so they did a lot of schools," Bauman said. Among other projects, the award-winning design firm was involved in the Memorial Auditorium roof-raising job; the federal building that went up at Delaware and West Huron; and the physical facilities administration building at the University at Buffalo Amherst campus. Bauman worked at her dad's office during her high school years. The staff "was like a family, so you got to know people."

Pfohl also designed the altar for the rebuilt St. Michael's R.C. Church on Washington Street in Buffalo. The church, built around 1852, had been heavily damaged in a fire in 1962. Some of the glass pieces from the wreckage were salvaged by one of Bauman's relatives, and a window decoration made from those pieces now adorns her home, just two doors from the original Pfohl family residence. "It has a lot of significance," she said.

The Buffalo Launch Club provided her father a means to relax from an intense work week. "A lot of his friends were there," Bauman said. "I think it was just a nice place for him to escape work and to just enjoy a good meal. He would take us there frequently for dinners. My brothers and I loved that," Bauman said.

"They would have events, parties, and my mom, I know, really enjoyed that. It gave her an outlet. There weren't a whole lot of outlets for women on the Island. That was a major part of their social life, besides business and church acquaintances," she recalled. "And we used to go up to the races there all the time - that was so much fun."

The family's house on East River Road, dating from 1888, was a summer home, until they moved there year-round in 1948. Pfohl got a chance to use his architectural and engineering skills in transforming his own house for his family's comfort. As a seasonal home, it didn't have heat. "I remember us getting water from the river," Bauman said. "And the first summer we were there, we had kerosene light and an outhouse. And then during the winter, he put in the basement and the heat and the plumbing and all of those things." Her two brothers and a friend developed the beach around 1955. "All summer long they worked on that break wall."

She moved out in 1962 when she married Norman Bauman. They have six grown children.

When her parents died, her older brother, Ed, bought the family home, and when he died, the house was sold to new owners. "They've done a beautiful job of restoring it and keeping it in period."

Roswell Pfohl died at age 77. "For me, my dad was just an inspiration - just a model of goodness, I guess, and faithfulness and integrity," Bauman said. "After his funeral, some people would come up and tell me how he impressed them in those areas, and you just take it for granted, 'cause I didn't know any different."