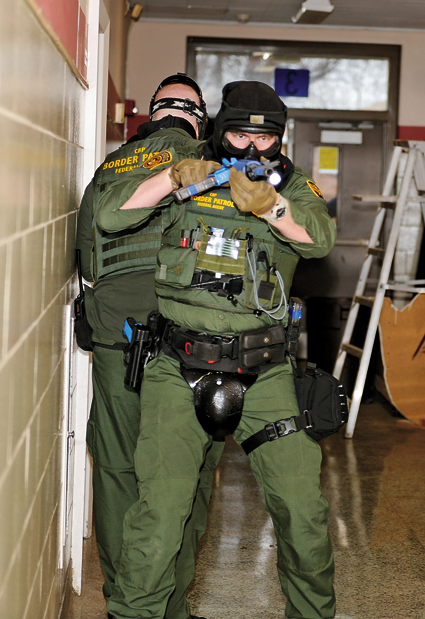 "We need to be prepared; be progressive; forward thinking. This is a perfect example where agencies, no matter what the jurisdiction is, in real life we're all going to be coming together."

On Tuesday and Wednesday afternoon at a training facility housed in a closed-down school in Tonawanda, it was what Barrett and LPD Chief Frank Previte termed law enforcement's response in today's world. Included was classroom tactical instruction followed by "simunitions" training for the real-life hostage taking and shooting scenarios all too often seen in the news of late - whether be it in a movie theater, on a college campus, in Paris, San Bernardino, California, or central Kansas.

A total of 12 officers - including six relatively new part-timers from Lewiston Police - and six veteran transfers from the Border Patrol participated.

"It's sort of a dual active shooter (training)," Barrett said. "Point being, it's nice to be able to do coordinated training with other agencies to where if we do have a call out or if it's in the field, in particular here with the communities close to the border, we're able to already have the communications, have a little baseline training, baseline operational knowledge, if you will, amongst the agencies.

"If we (should) have an active shooter in the future, this is a situation where all the agencies come together."

Previte said Lewiston's situation is somewhat unique - and the potential for situations to occur is there, unfortunately.

"(And there's) the change in climate, that we've seen things change in society, where it's not even much a school thing," Previte said, pointing to the recent Uber shooting. 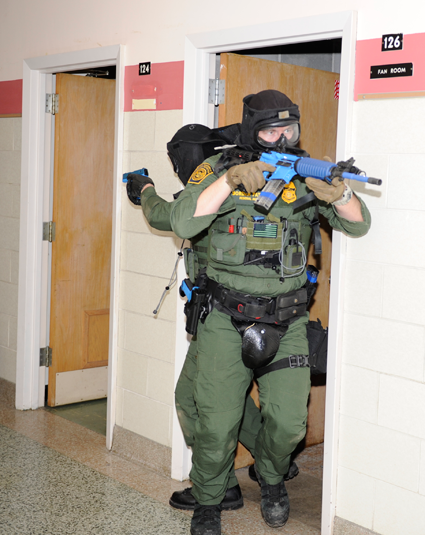 "We've done a number of these (exercises)," he noted. "The schools, usually on a yearly basis. We've involved Border Patrol in a lot of those in the past, like the countywide training we did about two years ago. We had a lot of the Border Patrol agents come down and assist us, as instructors, as well as have some of their guys come down and assist us, countywide, for the responses.

"One of the reasons that precipitates this now is that it's such a fluid kind of situation where things change as far as the training," Previte continued. "They're (Border Patrol agents) going to be here in any kind of response, whether it's a coordinated response or just us and their supervisors ... because of the proximity. They're going to be just as close."

Barrett said, "We do active shooter training quite a bit, just to kind of refresh skills, to freshen up training for new people."

This past Tuesday and Wednesday afternoon at the closed-down Tonawanda school, it was just that - real life - with LPD officers and Border Patrol agents conducting room-to-room searches, probing though darkened tunnels, and encountering sudden shooter situations complete with shots fired and takedowns. Non-lethal ammo known as simmunition was employed, and the scenario, complete with gunfire, smoke and the tension felt in the room during the exercises, couldn't have been more real.

Both Previte and Barrett said the combined training effort is a necessary component in responding to today's world of uncertainty.

"Both the chief and I take it very seriously, the responsibility and the threat that we have, and we want to make sure that our officers are not only well versed in responding to that, but in a coordinated effort responding together. It's not just school stuff; it's getting more to the point that ... people are looking for opportunity," Previte said.

"Where we're working together on the training environment, that will (hopefully) cut time down on communication issues" in responding in the event of a real incident, Barrett said.

Both said they hope that will never happen. But they will be prepared if it does. 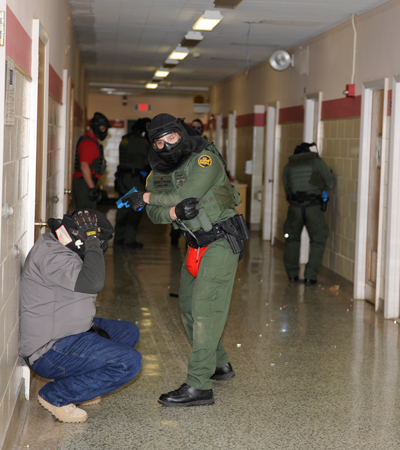