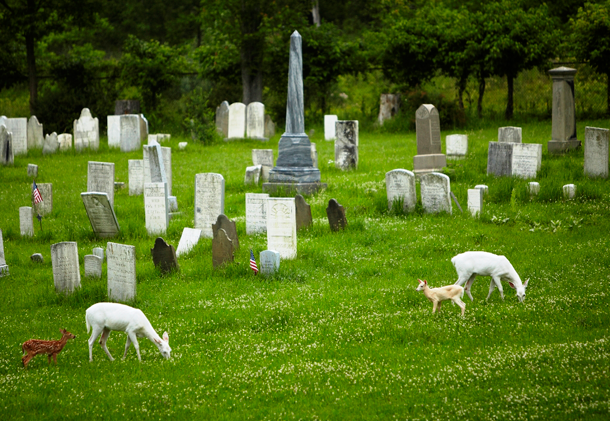 Sometime back, when our kids were younger, our family was tent-camping-oriented. It was fun and full of memories.

One place we spent some time for a couple of vacations was at Sampson State Park on the east side of Seneca Lake. The park is right across the road (Route 96A) from the Old Seneca Army Depot site, located in the towns of Romulus and Varick in Seneca County. It is about a two-and-a-half-hour drive from Niagara Falls along the thruway and south on Route 96A. (Look for the Geneva exit sign.)

The depot was used by the United States Army from 1941 to 2000. In the 1940s/World War II era, it was used as a munitions and disposal facility. Thereafter, for decades, it was a U.S. Army storage site, home to carefully guarded "special weapons" bunkers that held nuclear arms, and explosives, in secret.

When the Army took over, it was empty, vacant land and needed for the war effort. It consisted of 10,600 acres and included the First Baptist Church of Romulus (Kendaia) Cemetery, which has a long history dating as far back as 1795 when the Kendaia Church was founded there. The cemetery and monuments still remain, but the fate of it is uncertain at this point.

The photo was sent to me by Dennis Money, president of the Seneca White Deer Inc. (SWD), an interested group of individuals striving to keep the white deer population enclosed in a 24-mile fenced-in, 7,500-acre plot of land of the original 10,600 acres. The unique picture taken by Money shows white deer grazing in the First Baptist Church Cemetery.

"There are at least three Colonial solders buried there (from Civil War days)," Money said.

This cemetery can be seen from the road.

Money also included another photo he said was a "rare shot of a white, brown and piebald deer. Most of the white deer at the depot are pure white, so piebalds are uncommon."

A piebald deer, or a horse or other animal, would be referred to as a "piebald," because it has a spotting pattern of large white and black or brown patches. These white deer are not to be mistaken for albino deer. Albino animals' eyes are pink; white deer eyes are all brown or gray.

Actually I have some white deer pictures somewhere that were taken with an old Kodak Brownie camera that had no zoom features like the digital cameras do today, so the quality is poor. You could get near that fence, but it was off limits to the public inside - and still is. If you have kin in the cemetery, you are allowed.

The population of white deer at the Seneca Depot was once reported to be the largest of its kind in North America. Since they were first discovered there, the population has dwindled from an estimated 2,000 to 80, according to a recent census done in a fly-over in a helicopter by Money. Just eight years ago the population was counted at 200.

Remember, the Army took over in 1941, but it wasn't until 1949 that the deer were discovered and the Army base commander gave orders not to shoot them. With no hunting allowed, probably predators, some harsh winters and diseases have taken their toll.

There is a battle going on right now of who should own, preserve and operate the historic Seneca Army Depot in an effort to save the white deer preserve. The Seneca County Industrial Development Agency, as of its Feb. 9 meeting, and the Seneca County Board of Supervisors made an amendment to the original agreement between the county and the IDA.

"This amendment allows for this board to be a part of that process, which the original one didn't, and it also does state that we are going to try to look for the preservation and protection of the white deer," said Cindy Lorenzetti of the Seneca County Board of Supervisors.

There are many arguing that, if this land is sold to a private developer, the rare white deer population and wildlife could disappear.

So, if you are interested in buying a crop of this land, you will have to take care of and maintain the population of its residents. The Seneca County IDA is accepting bids from potential buyers until Feb. 29, saying it's not about selling to the highest bidder, but what's best for everyone in Seneca County.

To learn more about Seneca White Deer Inc., go to www.senecawhitedeer.org or pick up the phone and call Money at 585-944-3015 or 585-394-1287. Money is a congenial guy and will give you straight answers. There are many clear color photos of these beautiful animals on their website. While on that website, there is a place you can donate (tax deductible) to the white deer organization.

•In reference to the squirrel story that appeared in the Sentinel two weeks ago, I received more emails from readers on the subject. A very interesting one came from local resident Andrea Ferin, thanking me for the article. Sometime in the near future I will share these stories with you.

Ferin did refer me to Wild Kritters of Niagara, which has a squirrel expert - Suzi Wrona. So, if you have a problem with squirrels, contact me and I can give you Ms. Wrona's phone number or go on the Wild Critters of Niagara website, www.wildkritters.com, and get more information there. The Wild Kritters organization consists of wildlife rehabilitators and helps all kinds of injured animals, birds and reptiles. While you are there, it wouldn't hurt to leave a small donation for them so they can continue their rehabilitation endeavors. This is a nonprofit organization, and they rely heavily on your open heart.