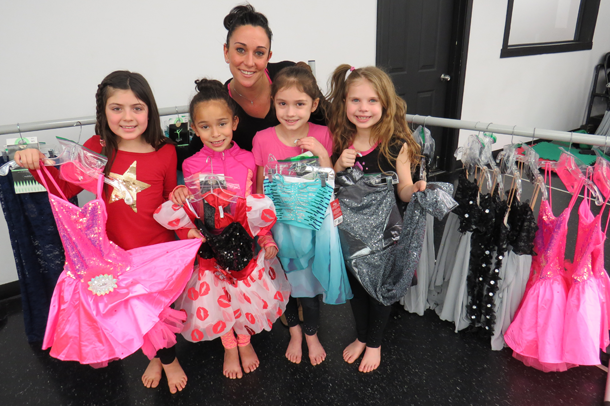 Adell Hoover Manarino works inside and outside the classroom with her students.

"I need you like you almost ate a lemon," Adell Hoover Manarino tells her students.

The four 10-ish-year-old girls giggle, and then it's back to work. They begin marching like an army - but way cuter - and their faces pucker up.

This new twist to their dance routine has them overthinking a bit on the first go-around, and, as a result, they're not quite in step.

Sure enough, as they stand in front of a mirrored wall, with Adell standing behind them offering coaching, they figure out the routine sequence and find a rhythm on their second try.

"I'm so happy that you practice so much," Adell says to the girls.

Following a few more minutes of dancing, the students are dismissed. As they exit the classroom, smiling faces produce comments like "That was fun!"

In the nearly 10 years since Adell opened Adell's School of Dance, her studio has developed a reputation for seamlessly tying together hard work and fun.

"Sometimes we joke around, but we work at the same time," 12-year-old Grace Wythe of Niagara Falls says. "It's just very fun, and I love it."

"They love it. They have fun," Smith says. "The whole time they're here, they just love every minute of it."

And they love Adell, who, despite excelling at dance growing up, was overlooked by others early in her life. Her high school never appreciated her talent, or offered Adell an outlet, so she made one for herself.

Today, her studio, which has been located inside the Payne Plaza on Military Road for the past seven years, is filled with trophies, newspaper clippings and, yes, students.

"She's just an amazing person," says 15-year-old Hannah Mergi of Youngstown. "We were in a tiny studio (off) Military Road and we were basically bursting at the seams. We came here, and we're starting to get bigger and bigger."

"When you're looking from the outside in, she's that teacher that you really want to work with, because she's just amazing," Mergi added. "She's just inspirational in all aspects."

"She's very dedicated," says Ashley Orsi, whose 5-year-old daughter, Abigail, is one of Adell's younger students. "She treats all these kids like they're her own. She's not just someone that runs a business and comes in and just does her thing and leaves. She's very passionate about what she does. It shows. She puts 100 percent into it. She's loyal. She's so good with these children. She knows every single one of them individually."

Not only does Adell know her students' names, she knows their quirks, too, pointing out to this writer what each girl needs to do in order to master this year's choreography.

"She knows them," Orsi says. "She cares about them. She's dedicated. She's here all the time. Every time I'm here, she's here. She's working with these kids nonstop.

"And she's just a very nice person. You can tell that she loves what she does - and it shows. And the place here is just phenomenal. It's clean. It's such a great environment to be at. I wouldn't bring my child anywhere else." 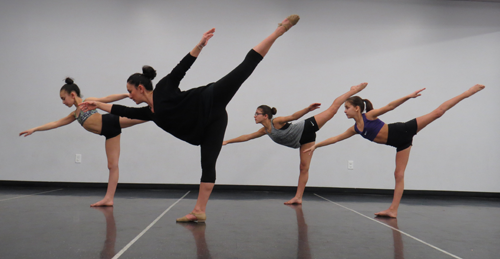 Adell has created an atmosphere where students can succeed in and out of the studio.

"If you were to come and watch any of the recitals or even like the parades, you could just see it: That she's the best," Orsi says. "Nothing compares to Adell's. Nothing. She's spot-on. The girls, you can just see it in all the girls - how they dance - that it's from the coaching."

"She pushes you to shoot for things that you never really thought you could," Mergi says. "Now, I'm sending in a video to the Joffrey. And she was really supportive of that. She's, like, 'OK; let's go!' So we filmed it today.

"I'm really happy with where I am."

Smith says Emily has "grown as a dancer. She's matured as a young lady. She's got great role models."

"They're a great group of girls," she adds. "They have really good role models. They do a lot of community service - not just here, but they do a lot within the community ... which I think is important, too. She gives back a lot to the community.

Wythe notes, "She really believes in us, and she's a hard-working teacher. She doesn't stop; she's always going, going, going. All the girls look up to her. She's amazing."

"It's very creative and, not only do we learn dancing, but we learn how to be respectful to other people and work as a team," she says. "She's very respectful. She doesn't say any negative things towards other people or dance teachers. She's very supportive to everybody."

As a past participant and current organizer of the Peach Queen pageant in Lewiston, Jennifer Pauly has seen her share of dancers and dance studios. She could've picked any number of places to send her children for instruction.

"I have sent my children to Adell's School of Dance since the first year Adell opened a studio," Pauly says. "I remember watching Adell perform her tap routine at the Miss Niagara Pageant, and then again on the Miss New York stage in 2003. I told my newlywed husband at the time that, when we have children, they are going to learn to dance from her!"

Kaitlin Principe has been an instructor at Adell's School of Dance for eight years. She said she never expected such a career path.

"She's the reason I'm here," Principe says. "I have my bachelor of science in psychology. I was doing this when she opened her studio. I hopped in to do just exercise; be part of it; continue dancing. And she threw a class at me here; a class at me there. And I ended up loving it, falling in love with all the kids that we have. Especially our competitive ones are very dedicated. Even the rec kids, our recreation group, they come in ... they're committed. They're the harder working ones."

Moreover, "We have our own ideas. She values all of our opinions. She listens to us," Principe says. "If we have an idea that's kind of out there - you don't really think it's going to work - she'll figure out a way to make it happen for you, even as far as costume design goes. If you want to start really at the bare minimum for these kids' costumes and really build on something, she'll make sure that happens.

"Any kind of music - I had a weird song that I'm using this year for one of my classes. Everyone kind of gave me a weird look of 'Why would you use that? That's kind of not really something you would use.' And she said, 'You can do it. Make it happen.' So, I did, and it's actually working out great."

Principe says such a dance teacher is "rare."

"As far as creativity goes, (Adell) can do whatever she wants, and it works," Principe says.

While dancing comes naturally to Adell, receiving such praise does not. In fact, the only time you'll see Adell anxious is when she's reminded her students' dedication and devotion is because of her time and talent.

"I make sure that what they do, and the time and effort that they put in ... whatever it is, whether it be fundraising - I make sure that the kids get recognition," Adell says. "It's not about me as an owner. When you're a dancer, obviously you want that recognition for yourself as a dancer. But now it's more about my kids, just because they're the ones that - yeah, we put in long hours and lots of time and energy and sleepless nights with the choreography and costumes and stuff like that - but our whole reason for that is them. I want them to be recognized for their hard work and dedication."

Adell, who's in her early 30s, was recently voted top dance instructor by a local daily newspaper.

"If I'm considered the best, I would be honored and humbled by that," she says. "I think that, when you feel like you know everything there is to know, that is when you're actually declining. So I think, especially in this business, you have to stay up to date on things. You're constantly learning. ... Somebody could always teach me something. ... This upcoming season will be my 20th year teaching, and I learn everyday - whether it be a different formation change; whether it be a way to break something down to make it simpler to kids to pick up; whether it be standing in front of a kid that needs to see it from that way or them watching. You learn constantly."

Adell's goal is not to be the best, per se, but rather to provide the best environment for her students to learn and grow.

"I think, when I was a teacher, I was very, very passionate about it, obviously. Once I opened a studio, I became like a protector. Meaning the way I view it is that this is everybody's safe place. And I'm very protective of that," she says.

"And I'm very defensive. I'm very, very ... protective as far as how the studio is run and behavior in the studio and respect levels. Just because, to me, this is a safe place, and that's what I'm protective of," Adell says. "Kids have bad days now for all different reasons. A 7-year-old, it could be they got a 95 instead of a 100 on a test, where a 15-year-old's parents are separating. You don't know. But this is the place that they can come that nobody judges them. It doesn't matter what school they go to. It doesn't matter what their financial status is, or if they're low-income, middle-income, high-income. It doesn't matter."

Principe says, "All my life I've kind of looked to her for advice in everything. She's not judgmental towards anyone for anything. She will give you the shirt off her back when needed - even when not needed. She's a wonderful person with a big heart."

Pauly says, "Adell provides more than exceptional dance instruction at her studio. She provides an environment where my children are loved by the instructors and staff, taught about the importance of teamwork, cooperation, responsibility, discipline and so much more.

"Adell's instruction goes beyond the dance classroom. The performance competition team that she created is given opportunities to volunteer as well as perform in local communities, fundraise for their team, fundraise for charities, and also compete at dance competitions with their classmates. She is always looking for ways the students can do more than just dance and take classes. She finds ways for them to be involved outside the studio... tying in the passion of dance with civic involvement.

"I absolutely love that for my daughters." 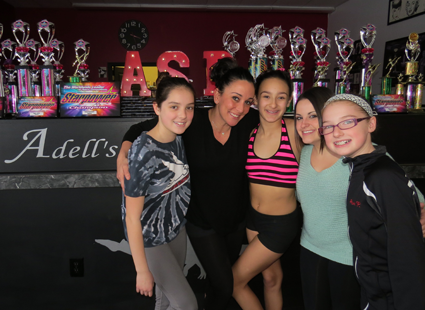 Adell Hoover Manarino works inside and outside the classroom with her students.