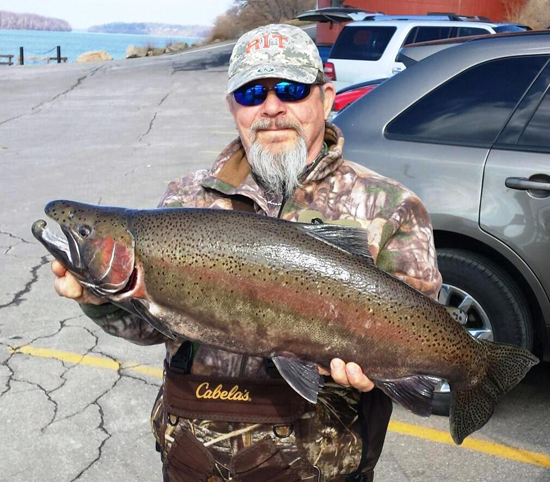 You'd think to yourself, "Who in their right mind would get up and prepare to go fishing at 4:30 in the morning in the winter?"

I guess at one time we all did, but not necessarily so in January or February and fishing from a boat.

This year, the Niagara River Anglers Association held its Roger Tobey Memorial Steelhead Contest, under the chairmanship of Bill Mayes. Tobey was a NRAA member who had a home accident, but he was a volunteer who went beyond his realm of his duties. The people who knew him will always remember Tobey.

The NRAA was established in 1982 and has a long history of community activities, with fish stocking, access, youth and cleaner waters to name a few. These community activities are all done with a force of volunteers. It was 30 years ago when the first and only organized steelhead contest in the Niagara River was held.

This year, angler participation was down for some silly reason, although the weather cooperated. Some years ago, these guys would be fishing in blizzards, cold rain, 35-40 mph winds and ice flows coming down the river. The ice flows went over the Lake Erie ice boom due to a horrendous storm the day before.

Seems like the worst weather years saw more participants with well over a hundred fanatics participating; this year there were only 45.

You don't need a boat to fish in this contest, although your chances are better. It is open to shore fishermen. Beyond the $20 entry fee, if you are a member, there was a separate division for the biggest brown trout. All entrants are given the choice of tossing in an extra $5 bill in the pot to see who would be the lucky one to catch and land a winter brown trout.

This year, there was a nice 5.58-pound brownie caught by 17-year-old Ken Jackson Jr., grandson of NRAA President Paul Jackson. He caught his fish from shore at the Burt dam in 18 Mile Creek. He made a little money for his efforts, and that money will probably go for buying some new fishing gear.

The first-place honors for steelhead went to Bob Rustowicz, shown in the photo. He entered 12.22-pound winter-colored steelie that would make anyone happy. It was probably worthwhile for Rustowicz to get out of bed really early in the morning. Now he has a little change in his pocket and bragging rights.

Matt Roche entered a 10.18-pound steelhead, picking up some pocket change and making him another proud, happy fisherman. Roche was out with River Charter Capt. Joe Czyrny of Anglers Obsession Charters in Lewiston.

Third-place finisher was Francis Slovakia with a 9.50-pound bruiser. I think Slovakia was happy with his catch, by placing ahead of 45 other anglers all vying for first place.

NRAA President Jackson commented, "The river and creeks were ice-free, but stained by dirty water."

The dirty water is because there is no ice cover on Lake Erie and, anytime you have high winds for a day or so, the open lake gets all riled up and down comes that dirty water.

Following the event Saturday, awards and accolades were at the Lewiston No. 1 Volunteer Fire Co. firehall. There were prizes handed out and, to top it all off, the NRAA not only sponsored another community event, but came through and paid for the food and beverages through donations and membership.

Remember, this is an all-volunteer group of fisher people - no one gets paid; volunteers do it all.

The squirrel story in last week's Sentinel drew some attention to the red squirrel in our area. First, I got a phone call from Tony Mang, my most active outdoors activities man who lives in Youngstown. Mang has been around this earth almost as long as I have, but he is the real hunter, fisherman - one who I can always rely on to send me some accurate information.

The day after the squirrel story appeared in the Sentinel, Mang called and said, "Mark, I think what the lady saw could have been pine squirrels. You know, they are around here."

He then went on to describe them. "Ya know, there is a small squirrel around here that doesn't get very big and it will change colors in different seasons of the year."

Mang compared it to a blue jay, a beautiful but pain in the neck bird around my feeder.

"Take a blue jay, for instance. Did you ever notice how, at certain times of the year, they are still blue and pretty, but, as warmer weather comes along, the colors get to be a much brighter and richer blue? Well, the pine squirrel is the same way," he said.

On Monday I saw an email from Monika TenEyck. She wrote, "Just read your article on squirrels and we were quite perplexed that you indicated that there are no red squirrels in this area. Patricia Schultz exactly described the behavior of red squirrels, which we have all over here in our neighborhood - Ridge Road east of Model City. I call these little guys muscle man, and they are not afraid of anything especially, not the larger grey cousins.

"Our indoor cats love watching them from the window sills when the little red ones sit on top of our fence or eat sunflower seeds on the bottom of our bird feeder. In the spring, we observed youngsters playing and chasing each other. These red squirrels, just like their cousins, love our large black walnuts and really look funny carrying them over our deck facing the Escarpment. Regards."

And on Tuesday, Patricia Schultz followed up with an email:

"Dear Mr. Daul, We enjoyed reading your story about squirrels. The information was interesting and we believe that it may be a red squirrel that visits our yard. Squirrels certainly are smart creatures as evidenced by our repeated attempts to keep them from eating all the birdseed and sunflower seeds we put out. Whatever foils my husband tries in outwitting them, they succeed in winning. But we continue to enjoy all the wildlife in our backyard and woods, and are delighted in still seeing our 'orange squirrel' occasionally.

"Interestingly, we've had wild turkeys, too, in our yard looking for food. Last summer we had a mother with three chicks that visited for several months. We actually watched, as the chicks grew rather large during their repeated visits. Then they vanished and never returned. But about two weeks ago, two large turkeys returned to make a daily visit to scratch and eat the birdseed. We wonder if they could be two of the chicks we saw last summer. Maybe? Thanks again! We enjoy your columns. Patricia Schultz."

"There are 25 recognized subspecies of red squirrels."

Wikipedia described it as being somewhat larger than a chipmunk. "Red squirrels can be easily identified from other North American tree squirrels by their smaller size, territorial behavior and reddish fur with a white underbelly."

Thanks for the response from everyone; it is so nice to hear from readers. Outdoors is where it's at!

Remember spring is just around the corner and that is when the fish start to get active again.