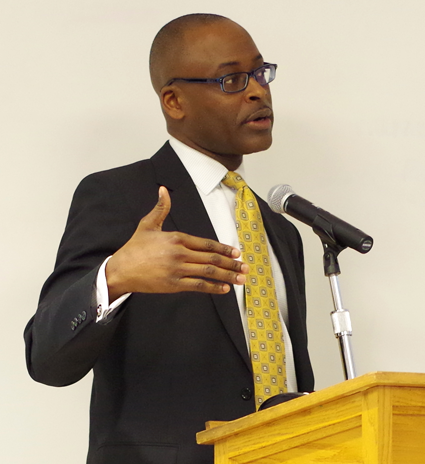 Board of Education trustees heard the first news on the 2016-17 budget for the Grand Island Central School District on Monday.

At a regular board meeting held in the Grand Island High School Professional Development Room, Assistant Superintendent for Finance Robert McDow made a presentation to the board with preliminary budget numbers for the next fiscal year.

"We have to find a way to get to 3.4 percent," McDow said. "But we have a lot of unknowns now and our budget is very conservative."

Numbers will change over the next 6-8 weeks, McDow said, once certain costs are known. This is just a rollover budget from one year to the next, he told the trustees.

McDow said a goal is to "find a way to get Tier One in. Those are things we need, so we have some work to do."

One unknown is the teacher costs. The teachers have until March 14 to announce their retirements.

The major budget increases include a $1.8 million increase in debt service and debt service interest due to the $51 million capital project; $520,032 (3.3 percent) for teacher salaries; $376,288 (5.9 percent) for the health insurance program.

Basic budget decreases totaled $429,330, mostly from a decline in the costs for the retirement programs.

Enrollment projections will see a decline in enrollment at Sidway (426 to 382) as a big first-grade class moves up to second grades at Huth Road Elementary and Kaegebein Elementary. In fact, Huth's second-grade enrollment jumps from 92 to 129 and Kaegebein, 82 to 106.

Projections for high school enrollment drops from 990 to 962.

The school administration divided budget impact items from Tier One to Tier Three in priority.

Among the Tier One priorities:

Other Tier One priorities:

•.4 art teacher in the middle school

•.4 health teacher in the middle school

•.5 FAC teacher in the middle school

•A special education teacher at Sidway

•A library clerk in the elementary schools

•A building and grounds custodian to take care of the 32,000 square feet of new building space

•May 17: community budget vote and board trustee election