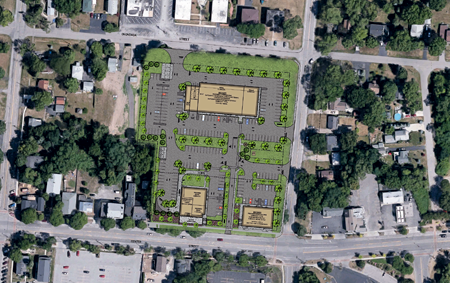 "These two projects together are going to be a lot of construction - and a lot of stuff going on. But I think it's positive for us and for our tax base," Planning Board Chairman Norm Machelor said.

He added, "Instead of what we have now, that kind of scrub forest, we're going to end up with this project."

Following only a few comments from neighbors - a far cry from previous gym meeting sessions - the developers were tasked with working on a second submission en route to final approval from the Village Board of Trustees.

Engineer R. Christopher Wood of Buffalo's Carmina Wood Morris PC explained how both plans changed to reflect the requests of the board, as well as citizen input obtained at a series of previous meetings. He spoke on behalf of Jerge and Ellicott Development CEO William Paladino.

The Fairchild plan was presented first.

Jerge intends to tear down the 27,000-square-foot former Fairchild Manor nursing home bordering Onondaga Street and Fairchild Place. He is seeking permission to build a 12,000-square-foot, three-story apartment complex on one acre of Onondaga Street. Behind the building, on Fairchild Place, he has another half acre to possibly build four single-family lots in keeping with the neighborhood's existing homes - just about 6,000 square feet, with the same depth and width.

Wood said the current proposal shows 55 parking spaces, which is one shy of what's required (two per each of the proposed 28 units). The apartment complex would have two detached garage structures.

Jerge said the one- and two-bedroom units would be marketed to seniors. 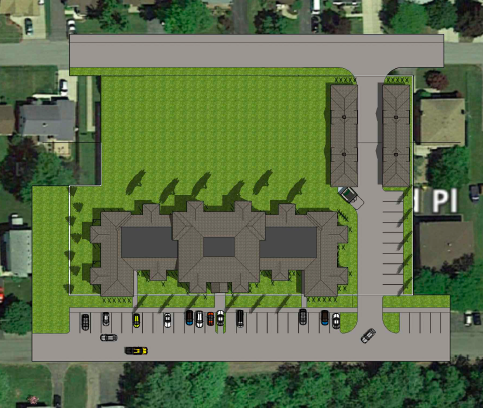 James Jerge's apartment complex is slated to be built in the Village of Lewiston. (Image by Carmina Wood Morris PC)

Machelor said the apartment complex's third story is allowed based on the building's height, which is 40 feet to the peak and 35 feet to the midpoint of the roof.

In lieu of a playground, which is required under village code, the apartment building would have a community room. In addition, Jerge would make a contribution to the municipality's recreation department.

Additionally, his property's percentage of green space would improve from 27 percent to either 59 percent (without the four Fairchild Place homes) or 50 percent (with the homes).

The distance between the apartment complex and the four single-family lots, if built, would be 30 feet - 10 feet shy of what the village code requires.

"Thank you for attempting to clean that up," Planning Board member Claudia Marasco said of the shuttered former nursing home site. "That is an eyesore beyond belief."

Following the Planning Board's approval of Jerge's first submission, Wood dove into Ellicott Development's plan, which some have called "Paladino plaza" after the CEO and his father, company chairman and former gubernatorial candidate Carl Paladino.

As residents now know, Ellicott intends to tear down the former Country Doctor and Grandpaws store buildings, as well as the location where Smith Brothers Pizza now operates, and build a four-acre mixed-use plaza with three buildings.

Wood outlined numerous changes in the proposal, which was last presented in September.

"At the request of the village, we did (add) a public sidewalk along Eighth Street, from Center all the way down to Onondaga Street," he said. "That's along the right-of-way, so that would be used by the public.

"We also moved building No. 1, which is the building in the southwest corner, we moved that up to 20 feet from the right-of-way, which now complies with the zoning code."

The top levels of buildings No. 1 and No. 2 are at grade. Both structures would have retail and dining.

Speaking again of building No. 1, Wood said, "From Center Street, you're going to see the one story. As you go down the driveway and around the back, you'll see two stories from the back side."

He added, "The drive-thru lane is down at the first-story level."

"That 20-foot setback, within that, we are proposing a patio, which would be associated with the restaurant," Wood noted. He explained it would be incorporated into the streetscape.

Though Wood's submission suggests two-bedroom apartments on the second floor of building No. 3 - the drug store - he said a final decision has yet to be made.

In terms of lighting the plaza, "Again, at the suggestion of the village, we did revise the type of light fixture we're going to use. ... As opposed to your typical shoebox light, they're gooseneck lights. They're LED, also, at a 15-foot mounting height. ...

"At the request of Norm, we did submit a plan that shows that several of the lights can be turned off after midnight."

Also, "Along the front, we do have several retaining walls. By code, we (have to put) a fence on top of the retaining walls. It's got to be at least 42 inches. That fencing we originally proposed as black wrought iron. And, again, at the request of the village, to keep the theme up and down Center Street, we did revise those to white picket fences," Wood said.

Additional benches also will be added to Center Street. 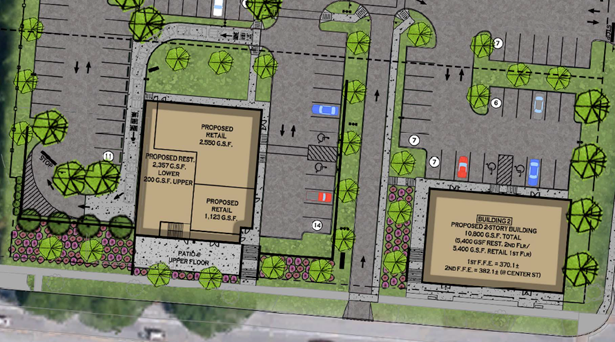 Board member Joseph Sorce suggested Ellicott Development scrap plans for second level housing in building No. 3 and, instead, lease space to an immediate care center.

Moreover, Sorce said, "Keep this in mind: You have a medical center upstairs; you have a drugstore downstairs. Now you have a one-stop shop.

"We can pass that onto Bill," Wood said.

In past meetings, the Planning Board defined several hindrances Ellicott Development faced in building its plaza. Wood discussed how his client was addressing those obstacles.

•Parking: As drawn, the plaza is 75 parking spaces short of the required 262.

"We felt, with some discussion with the village, that the green space is probably more important than additional parking spaces," Wood said.

He later added, "We feel, and the tenants that they currently have, they feel also that there's more than ample parking spaces."

Planning Board member Anne Welch said, "I know the other plazas. They really don't use the parking that they have, and they have less parking than you're showing on your plan."

"The lot coverage allowance by code is 50 percent. Meaning that 50 percent of the site could be covered by buildings. We have 16 percent," Wood said. "Building height requirement is 35 feet. All our buildings are less than 35 feet."

•Safety: Once again, residents asked why the Paladino plaza is "in-only" on Center Street - unlike the other plazas and parking lots. They expressed concern over traffic exiting onto residential roads.

Wood said that was the board's decision.

Machelor said, "We did it for safety."

He added, "We don't keep repeating if we think things are a mistake. I would love to see the (Rite Aid) plaza not have an exit onto Center. It's always a problem."

Many have requested a traffic light at Center and Eighth streets. The state's Department of Transportation will re-evaluate such a traffic-calming measure if and when the plaza is approved.

If a new light is approved, Machelor said it's possible the village would have to remove (or make flashing-only) another Center Street traffic light - probably the one at Center and Portage. 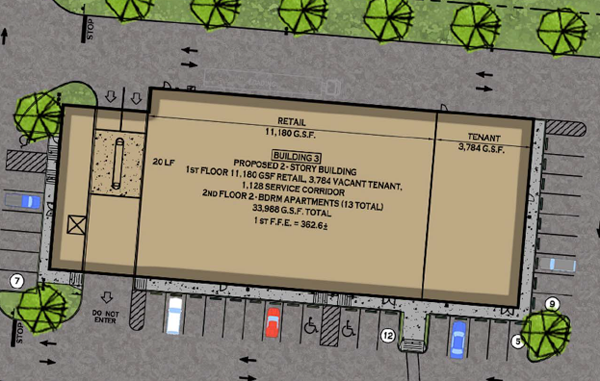 •Sewer: Water plans prevented the plaza proposal from being entered as a first submission in past months.

Department of Public Works Superintendent Terry Brolinski recently expressed concern about how the village's sanitary sewer would handle an extra 10,006 gallons each day - not to mention 4,840 more from Jerge's project.

"Obviously everyone knows the site slopes from south to north toward Onondaga Street," Wood said. "We would, obviously, continue to use that slope to allow that water to go toward the Onondaga Street side. Behind building No. 3 - to the north of building No. 3 and to the east of building No. 3, we'll have underground retention chambers, which would temporarily store the increased volume of stormwater, given that the site is mainly impervious now."

The parking lot would cover the retention sites.

"In the east corner, we would have two things: One would be a water quality treatment structure, which is required by code. It cleans the water and takes the sediment out," Wood said. "Downstream from that, we'd have an outlet control structure, which would be engineered to control the outflow of the stormwater in the proposed condition, so that it did not exceed what the present condition is."

"They did that study to look at what inflow and infiltration removal requirements they have from DEC. DEC has looked at that report and is in agreement with that report. (Niagara County) Health Department has seen that and agrees with it. (They) also discussed it with the town wastewater (treatment plant). We're in the process now of identifying the mitigation measures. That would be something that would have to get resolved between now and a second submission."

"(Wood) also submitted a SEQR form for this, that would have to be acted upon by the Village Board," Marino added. "They went ahead and did sanitary sewer water flow monitoring to identify mitigation measures they would have to take, and they're aware that we're identifying mitigation for I and I (inflow and infiltration) removal in our existing sanitary sewer system.

"So, between now and a future submission, we have to pin those down with what those plans would be. And then, of course, the details of connecting to village utilities would be ironed out."

Marino said that, for every one gallon of added wastewater, a project developer has to remove four gallons of rainwater (thus neutralizing inflow and infiltration).

"DEC has commented that they're satisfied that, as long as the mitigation occurs, as identified in the report, they're good with it," he said.

Having reviewed the current plans, and met with Marino and Wood, Brolinski said, "I love the stormwater plan. Even with the lack of green space, the unit that they're going to use is an absorption unit. So, basically, what's going to happen is this stormwater is going to come into these units, and the ground is going to absorb it. And I've seen one of the plans ... it was soil that will absorb the water.

"It's a great thing. I can't wait to see it myself. It's going to take all my concerns away from me."

He added, "That (extra) load of water that I was thinking about is pretty much nil if they hold it."

With both projects, "There isn't going to be any extra load," Brolinski said. "It's going to be less. ... I feel quite comfortable with it."

Speaking of the apartment complex, Brolinski said, "What's going to be nice with that stormsewer is that ... with the old building being demolished ... you're adding more green space. So, the absorption rate for that area is going to be a whole lot nicer."

Welch told Wood, "I think, since you first came to us a couple years ago, it has really been revised a lot, and you really listened to neighbors and village people, and you've complied with a lot. Just even putting the sidewalk in for the residents. You took the third story off the back building. Everything we asked you. You brought the buildings up so they didn't require a setback variance. It's just a better, nicer plan."

Shown is an artist's aerial rendering of the Fairchild-area apartment complex.