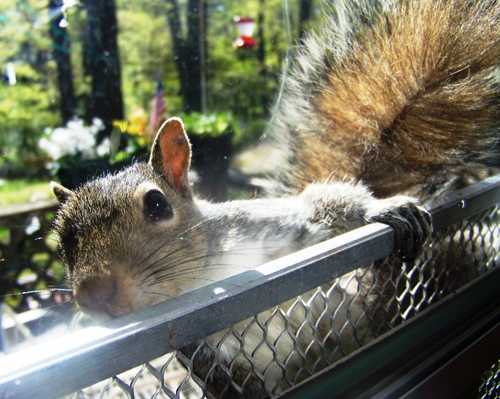 A while back, I received an email from Sentinel reader Mrs. Patricia Schultz of Lewiston who was curious about an "orange" squirrel sighting in her yard.

In her email, she wrote, "We have noticed a small, brightly colored orange squirrel in our back yard the past couple of months (sometimes two of them). This squirrel is much smaller than the larger grey squirrels and has a distinct orange color to its fur. It has very fast movements, is very 'skittish,' and seems to associate more with the chipmunks rather than any other squirrels."

Schultz searched for more information about an orange-colored squirrel and didn't find any reference to them except a restaurant named "The Orange Squirrel' in New Jersey. I didn't know for sure about orange squirrels around here, so I thought I would look into it for my own curiosity.

Yes, there could be red squirrels around here, but they're also highly unlikely to be seen. According to conservationists, their range includes most of Canada, the southern part of Alaska, coastal British Columbia and the Rocky Mountains. Some reside along the woods and forests of the Atlantic coast.

When most of us around here think of squirrels, we think of the American eastern grey squirrel, the familiar bushy-tailed tree squirrel we see in parks, backyards and woods. Actually there are many different kinds of squirrels - over 300 species worldwide - and they live in almost every different kind of environment that we can imagine, from the tropics to the Arctic; some even live in deserts.

Around this part of the country it is rare, but not unusual, to see a white squirrel now and then. Generally, the white squirrel you see is just an eastern grey that has an extra gene somewhere that makes its coat white. That's probably why we don't see many of them.

They are also excellent prey for eagles and especially hawks.

Some might want to argue the white squirrel they see is an albino. Albinos are even more rare. And if you can get close enough, you'll find albinos have red eyes.

If you pay attention to the squirrel population around Western New York, you may have noticed black squirrels here and there. I have a couple that roam up my driveway and hang out for a day or so around the bottom of the bird feeder. Once in a while, I notice the two hanging around other neighbors' yards.

In the Deveaux area of Niagara Falls, along the northern portion of Main Street, there are families of black squirrels. Commonly known as the grey squirrel, it can have different hair colors - black, white and sometimes even have a bit of rusty coloration.

Getting back to Mrs. Schultz's sighting, when I emailed her back I was thinking maybe what she saw was an orange strain of the grey squirrel. I likened it to the early 1950s when blue pike was abundant, and finally ruled extinct in the lower Niagara. In the early 1980s, fishermen were again reporting a fish that highly resembled a blue pike. At the time, I contacted Bill Sheppard at the Region 9 DEC (now retired). When Sheppard checked with his "genetic" engineers, it was ruled the blue colored fish was just a color variation of the yellow pike, or more commonly known as walleye.

Chipmunks, mice, rats, hamsters and guinea pigs are among the hundreds of other classified rodents, but none can perform and entertain like our backyard squirrels. After checking further into Mrs. Schultz's sighting, squirrels got the best of me. My research brought me wide and far, and brought me back to my own population of American grey squirrels in my yard. I mentioned a while back how I courted these little creatures, and how smart and interesting they are.

Squirrels are only active through the day. They don't hibernate, and are very amusing, whether you live in the suburbs or the cities. However, everyone has an opinion about them.

Some complain when squirrels get in their house (mostly attics). But my rebuttal is, "You may as well leave your door open for them, and if they get in through an opening of some sort, it's your fault you have these pests." That's your fault for sure. If you have an opening, repair it, and otherwise enjoy these guys. They only have a life expectancy of about three years.

The squirrel you see in the picture is one of my friends. I'd tell you his name, but my neighbor might take offense to his name being attached to a squirrel.

When you see an American grey squirrel in your yard, watch him jump from tree to tree, tree limb to tree limb. Watch him just climb a tree and how fast he works. Look for him showing off his acrobatic abilities across the power lines and, best yet, how he'll attack a bird feeder.

I once hung a bird feeder off a tree branch by a thin wire. It didn't take long, but these guys found they could wrap their feet around that wire tight enough so they could slide down easily on the wire, eat my birdseed, then jump to the ground.