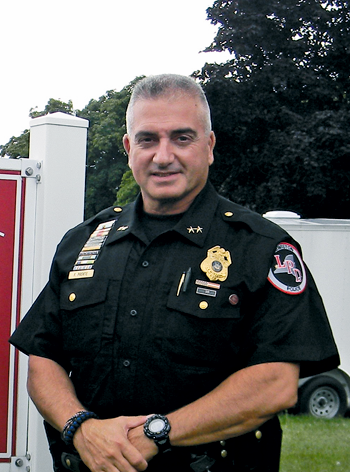 Lewiston Town Board member Al Bax revealed a new grassroots community surveillance monitoring idea at last month's board session - one that he and Lewiston Police Chief Frank Previte have hopes of getting underway soon in the town.

Bax, who serves as a board liaison on LPD matters, said the effort, likened to a neighborhood watch program, would involve the voluntary efforts of residents in helping to serve as the eyes and ears for the department in their respective neighborhoods. If implemented, one element could involve the voluntary use of electronic monitoring cameras already in place in residences and businesses.

"What's nice about this is that it's a grassroots approach," Bax said. "Obviously we cannot have police officers everywhere with eyes and ears on the ground, but there's more and more people getting the home surveillance monitoring. This will obviously be a wonderful tool in our police officers' hands, that when there's something that takes place in the town, within hours we can contact residents close to the incident, and hopefully get some vital information of what took place."

The idea won the support of Supervisor Steve Broderick and board members last week. Town attorney Brian Seaman was instructed to look into the matter for any potential liability to the town and how it could actually be implemented.

Previte said he was excited about the possibility of getting such a program underway.

"It's been something I've been wanting to do for a while, probably eight, 10 years," he said.

Previte explained LPD had a similar program in Sanborn in the early 2000s, and it was
discussed with Town Board members last year when he was interviewing for the LPD chief position.

"It's been on my list. We had something like that a while ago when Chief Winkley was here," Previte said. "Specifically, it was Sanborn. Sanborn had a pretty strong neighborhood watch program then. It's since kind of fell by the wayside, and that's something we're looking to initiate again."

The first step, he said, would be to seek the interest of residents and businesses in the town.

He would utilize town listings to reach residents initially, and then perhaps organize informational sessions in neighborhoods.

"My plan is, once we get this phase done (soliciting interest/participation), is to get the town divided up to certain sections, where we think there would be reasonable (interest) within a geographic area to see if we could try to get the residents' interest in forming a neighborhood watch in those areas," Previte said, noting the program would be strictly voluntary for those residents who wished to participate. "We'd see if there'd be interest, in who'd be willing to be involved."

Previte said he'd be looking for residents who currently have a camera-type monitoring system already in place at their household and would be willing to share this as a resource for the department.

"It depends on what they have," he said. "Say you have cameras on your house, and you have a camera system. The first step would be to canvas to see who would be interested in making that stuff available.

"It would be already existing or (maybe) you were planning on doing it," Previte said of the cameras. "What we want is just your information, so that we are aware that you have some kind of surveillance system on the outside of your house.

"That would provide us the means where, say there's a burglary at your neighbor's house. It wouldn't involve you, but we could contact you to see if you had any (video) information that was captured that you could share with us."

Previte said the invite is, likewise, open to Lewiston businesses. He said many in the village already share their information with LPD.

"We're fairly aware of what businesses do have them. We have used that already, that's why we want to expand it; that's proof that they're very useful, cameras that are (in) businesses," Previte said. "We can see a parking lot, or a street; we've been able to identify certain vehicles that have driven by. We may have a suspect. We'd be able to get the footage. Businesses are very cooperative."

Previte said his approach in enlisting residents' interest would be to start small, targeting certain areas, but eventually he'd like the involvement of the whole town.

"Pretty much everything in the town," he said. "I think the best (route) for us to approach in the beginning would be to narrow it down to a geographic area that may be covered, a certain amount of distance, the more populated areas, in the village. We'd narrow it down to a couple of blocks, make it into zones, but it would be all throughout the town."

He likened it to how Winkley operated the program.

"The way we had it set up before in Sanborn was in that geographic area," Previte said. "There'd be somebody who was interested with the neighbors. They would show interest in being a neighborhood watch captain. They would help organize who may assist.

"Maybe on a Monday or a Tuesday you would go out and take a walk, see what is going on in the neighborhood."

"They were fairly proactive. It worked out pretty well," Previte said of the Sanborn program. "They had people on certain nights. They would go out and walk the neighborhood; just watch for things that were out of the ordinary."

He said Sanborn could serve as a model for the town.

"I think it's a great idea," Previte said. "It helps not only for the public to know what we're interested in, (but) also to give some information, some direction on what were looking for, what to watch out for. It helps with the interaction, the feedback, the communication (with residents and the department)."

"In my view, it's a worthwhile thing to become involved in as a police department," he continued. "From a community relations standpoint, it gives the residents an opportunity to speak with officers on a regular basis, to voice what their concerns might be. It (also) gives us a medium to make them aware (of crime). It helps us get out the information; what is going on.

"Especially if it's in a certain area. We can tell the residents that this is the problem. It gives them an opportunity to focus in, know what we're looking for."

Previte said he is looking into neighborhood watch or block club programs that exist in the county for ideas, but the LPD surveillance program would be unique.

"The community or neighborhood watch would be something that we're instituting that's already not in existence," he said. "The camera stuff would be a confidential list that nobody else would have. It would be people interested in sharing whatever resources they already have for investigative purposes. If we found it would be helpful, it would give us a resource."

He added the first step is gauging the interest of residents.

"The first step is to get the word out, to see if there is some interest to pursue it, if not in the whole town, then what areas. Then we could reach out to see what people might be interested in participating," Previte said.

While inducements to residents for their participation would be modest, Previte said he felt the community-volunteering element would stand on its own merit.

"I think there is, because they (residents) are helping to limit crime in the area that they're in. It's helping for their security, their neighbors," he said. "The benefit is we are not asking anybody to go out and purchase anything. There is no cost to anybody. We're not encouraging people to go out and buy cameras. It's what people would already have."

And for LPD, it's what Previte called the eyes and ears of the neighborhood.

"Just a day to day eyes and ears, what is going on. There is nobody that knows better that what is going on their own neighborhood than the people that live there," he said. "This would be more of an organizational advantage for us, where we have something in place, where we'd be able to meet with them, to relate the problems for their area and receive the feedback from the people who live there.

"Look, there's a lot of people who have problems who don't call. In some kinds of cases, that goes by the wayside. (But) whatever issues you have in your neighborhood to share, be it violations, etc., it gives us an extra set of eyes and ears."

Previte said the Town Board and Seaman are expected to discuss the new community surveillance idea at Monday's work session. In the meantime, he invites residents to consider becoming part of the program.

"I'm excited about it," he said. "I hope it's something the residents can be excited about, and if we have the interest, we'd love to go further with it. I feel it's beneficial to everybody.

"To reiterate, there is nobody who knows their neighborhoods more than the people who live there. It's our best tool, our best source of information."