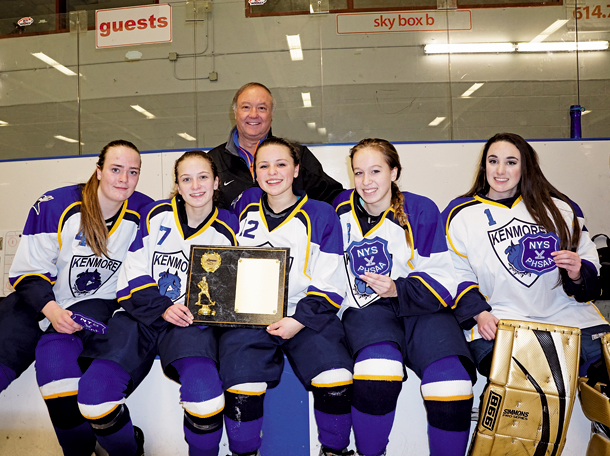 Combined team is a first for Grand Island

In just their first year of play in the Western New York Girls Varsity Ice Hockey Federation, Grand Islanders will compete for a state championship this weekend.

Kenmore/Grand Island beat Orchard Park/Frontier 4-2 at the Amherst Northtown Center Wednesday in the Section VI championships. The win was the fifth straight Section VI crown for Kenmore and the first for a combined team with Grand Island High School players. In their first hockey season together, they earned a trip for both to the state tournament final four in Albany Feb. 5 and 6.

Kenmore/GI coach Jerry Orlowski called the title "just unbelievable because it was unexpected."

"You lose so many seniors last year and you gain some really young girls from Grand Island that have really made a difference in our squad this year, I can't be happier," said Orlowski. He noted the team was seeded No. 4 in the playoff tournament and had a record of 5-5-2 going into post-season play. They beat two teams seeded above them, including a 4-1 win over the top-seeded Williamsville and the second-seeded OP/Frontier.

Islander Abby Blair had a pair of goals in the Williamsville game. Orlowski said that for the third time in the last five years, Kenmore native Lina Mirabella scored the game-winning goal in the Section VI finals.

"It's a great feeling. First time Grand Island has a girls varsity team. Pretty great that we could pull out the win," said Rosie Boyko, one of five Islanders on the Kenmore/Grand Island roster: Blair, Boyko, LeeAnn Wright, Tori Botticello and Andrea Colan.

At 12:17 of the second period, Lina Mirabella came down the left wing and whistled a shot into the top right corner of the net, assisted by Olivia Smith, for a 3-0 lead that Kenmore/GI would take into the locker rooms after two periods of play. 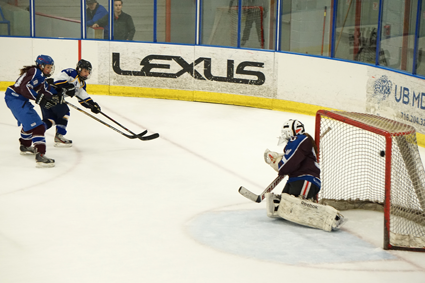 Kenmore/Grand Island's Lina Mirabella rips a shot into the top right corner of the net for a 3-0 lead. (Photo by Larry Austin)

Orchard Park/Frontier rallied with two goals in the first five minutes of the final period to cut Kenmore/Grand Island's lead to 3-2. Haley Tatar scored from the slot from Jessica Peters and Sirena Fitzery at 1:47, and Riley Johnson deflected Karley Baker's shot from the point at 4:36.

The goals caused a tense final 10 minutes at the Northtown Center, intensified all the more when Kenmore/GI's Jenna House went to the penalty box for slashing at 7:17. Islanders Abby and Boyko were part of the penalty-killing unit that preserved a one-goal lead.

Smith scored the clincher at the 12:10 mark with a move from behind the goal and a backhander into the roof of the net over OP/Frontier goalie Victoria Cottrell.

"And we couldn't have done it without Superintendent Teresa Lawrence and Assistant Superintendent Robert McDow and, of course, Brett Banker in Kenmore to take us on," Roth said. "We've been very lucky. I think the timing was right and it worked out."

"They were great participants from the start," said Banker, the Kenmore athletic director and a Grand Island resident. "They had outstanding young players who we hope to count on for years to come and we hope it's a partnership that lasts a long time."

The players at all the schools -- Kenmore East, Kenmore West and Grand Island -- put any Niagara Frontier League rivalry behind them.

"When this all started, we had an event over at Grand Island, a pizza party to welcome anybody that was interested. So the coaches did a wonderful job in bridging that gap. It was outstanding."

Roth said he and Banker sat down with Lawrence and Robert McDow showing the administrators a spreadsheet that showed the numbers to illustrate GI couldn't have a team of its own "because we didn't have enough girls."

Banker made a presentation with Roth to the Grand Island Board of Education during the board's budget process to explain the benefits of a combined program with Kenmore schools.

"They welcomed our kids with open arms," Roth said of Kenmore.

An Island girls varsity hockey team was just an idea little more than a year ago when supporters of a GIHS program held an organizational meeting in the Grand Island Memorial Library to discuss options for a team. Blair laughed recalling the meeting, "Sitting there in my basketball jersey and shorts in the front of the room."

Now she's wearing a hockey uniform on the ice.

"I was really hoping we could combine," Blair said of the meeting. "I wasn't expecting all this. I thought we were just going to have a great year and maybe work through it and see what would happen, but I'm really glad this is the turnout."

"It was a great opportunity for all of us and we all really appreciate them being willing to play with us. Without the team, we wouldn't really have anything to do right now," Blair said.

Some of the Kenmore and Grand Island players had played in the same youth league with the Niagara Junior Purple Eagles.

"Actually, a lot of them were past teammates and had played for Niagara, just like me, Abby, LeeAnn Wright, Tori," Boyko said. "We all played on the same team with them when we were younger, so I knew most of them, but I was kind of nervous to go to a new team, different people from a new school."

Bringing in five new players who didn't even go to Kenmore schools could have been a disaster for team chemistry, but instead it was a plus. Any anxiety about the merger was quickly allayed before even taking the ice. After he learned GI had received approval for a team in May, Orlowski had his Kenmore players go to Grand Island for the first GIHS signup meeting to introduce themselves.

"They merged well," Orlowski said. "I give huge credit to Grace Simmons, a captain of this team, because she reached out to every one of those girls personally and made this happen. She bonded this team together."

"Everyone was really welcoming," Boyko said. "Grace Simmons was really nice. They just tried to come together as a team."

"They were really open-minded. It wasn't any different. We all made friends real quick. We were all open with each other," Wright said.

"It's been great. The amount of talent on the team, it's amazing and to be a part of it is an honor," Blair said.

The addition of Islanders to the team "made a huge impact," Orlowski said.

"They're impact players, all of them. They all had a key role on the team this year," Orlowski said.

Wright logged a lot of ice time on the blue line for K/GI.

"I feel really good. It's our first year here and it's a big statement for us," Wright said of making it to the Final Four of the girls hockey tournament.

The wins proved "Grand Island has a lot to offer," said Wright.

To win a state title, "I think it's going to take hard work and having our heads up, and playing as a team and a family. We're a family," Wright said. 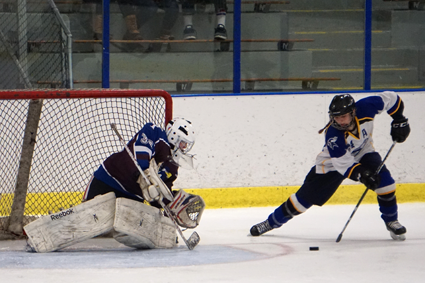 Olivia Smith scores the clinching goal in a 4-2 win for Kenmore/Grand Island over Orchard Park/Frontier. She sent a backhander into the roof of the net over OP/Frontier goalie Victoria Cottrell. (Photo by Larry Austin)