No one came right out and told Jill Anderson during auditions for the Grand Island High School musical that she would be flying across the Grand Viking Theater.

The Grand Island High School Music Department production of "Mary Poppins" continues Feb. 5 and 6 with a first for the school: performers elevated 10 feet and floating above the stage.

"There was a lot of talk about flying," Anderson said last week. "But it wasn't a real definite until almost a couple weeks ago. We pretty much assumed you can't really do "Mary Poppins" without having the flying experience because that's her iconic movement."

"It's amazing. It's an experience I've never had before. Yesterday just getting to try it out and actually moving across the stage like Mary Poppins just made the character that much more real for me," Anderson said.

Sam Sommer, who plays Bert in the musical, had a "wait ... what?" moment when he heard about flying and rumors of tap-dancing on the ceiling, but Bert does "Sommer-saults" with ease now.

"It was very scary at first, learning the technique, but once you actually get up there, it's sooo much fun," Sommer said. 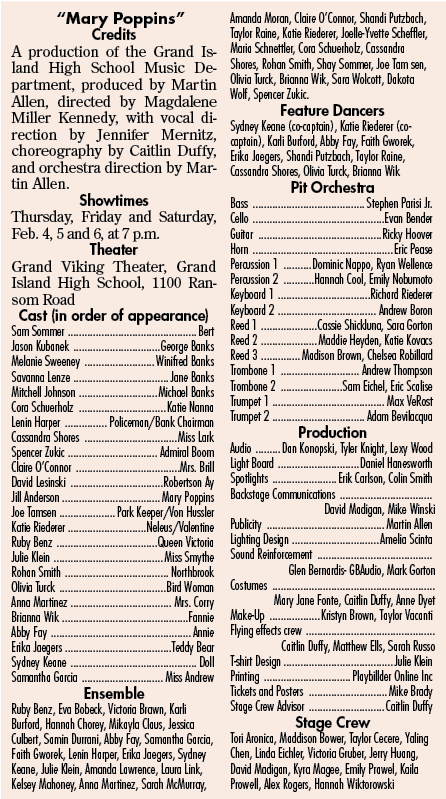 Anderson said nothing of this magnitude has ever been done in Grand Island High School's musicals, and it will make the audience feel the magic of Disney. She said the flying illustrates how GIHS has stepped up its level of performance, from flying, to music, to sets.

Matthew Ells, a member of the stage crew, said the district rented equipment from ZFX, a theater company out of Kentucky, to make the flying possible.

"They came in and rigged up our batons with all the pulleys and counterweights," Ells said. "They do this all over the country. The majority of their business is actually high schools, for 'Peter Pan' productions and 'Wizard of Oz,' and all these shows where someone gets lifted into the air."

Their technician came in and trained teachers and "taught us how to use the equipment and how to do it safely," Ells said.

Ells and fellow teachers Sarah Russo and Caitlin Duffy will handle the controls. Ells and Russo do the lifting, while Duffy has the controls to move Anderson and Sommer across the stage.

"It was a long debate on whether or not we were going to do it, and also whether or not we could afford it," Ells said. "But after some number-crunching and really thinking about the show, it's just that Mary really needs to fly as part of the whole magic of 'Mary Poppins' "

At the Jan. 25 Grand Island Board of Education meeting, administrators half-jokingly commented about liability. (Assistant Superintendent Robert McDow will likely hold his breath during the entire show.)

The production team worried at first as well, but Ells called the system "very, very safe."

"I was initially a little nervous about it, but once I got trained, I realized that it's a very controlled system. Everything is carefully in its place and there's not a lot of play with it at all," Ells said. "There's as minimal amount of risk as they possibly can have and it's not as physically as demanding as I imagined it to be either, which was reassuring."

Ells didn't know what would have happened if either of the leads had stage fright or fear of heights, in which case stunt doubles could be employed.

"I know we couldn't replace either of them in the roles that they're in," Ells said, however. "They're made for those, and they're great leaders for those positions as well."

The show is not a carbon copy of the famous movie starring Julie Andrews. Jill stressed the GIHS musical is the Broadway version of "Mary Poppins," which has differences from the movie, but the same story line. She said the stage version is "more real - it's a little less Disney."

Sommer's version of Bert differs from the character made famous by Dick Van Dyke in the Disney movie.

"I love his portrayal in the movie," Sommer said of Van Dyke. "I think I'm focusing more on putting my own take because I feel like the musical version of Bert is a lot different from the movie."

Sommer explained that the Broadway Bert is the narrator in the stage version, providing him an opportunity to touch the crowd in a way that's impossible on the silver screen. "You get to interact more with the audience and it just brings out more of the character ... and gives a lot of opportunity to bring yourself into it and connect with the audience," he said. 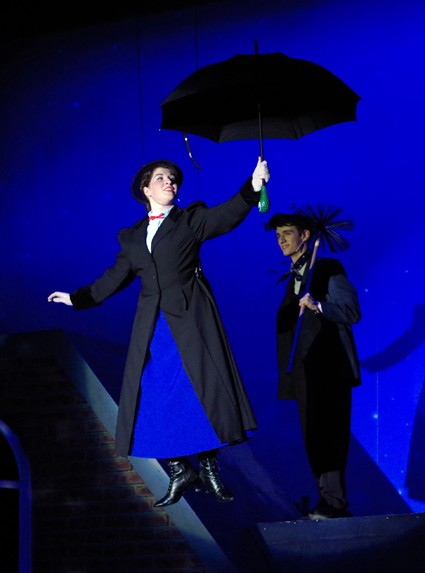