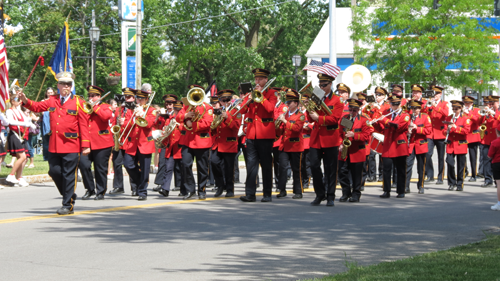 The Memorial Day parade will return.

Village of Lewiston: Memorial Day parade, ceremony back on

A venerated observance is returning in 2016.

Veterans of Foreign Wars Downriver Post 7487 Cmdr. Bill Justyk and Adjutant Norm Machelor officially announced Thursday the Village of Lewiston Memorial Day ceremony is coming back after a year off.

Machelor said the announcement was made now so residents and participants can "save the date," which is Monday, May 30.

The event was cancelled in 2015 due to a lack of funding. Specifically, luncheon arrangements could not be made.

While some residents scoffed at this reason for cancellation, Machelor said the point of the event - beyond honoring the fallen - is to provide the public an opportunity to fellowship with veterans.

"Watching a parade is different than being in a room with a whole bunch of people, where you get to actually meet our veterans," Machelor said.

"What we had before and what we're doing now is trying to get the community involved (with) the veterans," Justyk said. "Getting more people out, I think it will do everyone good." 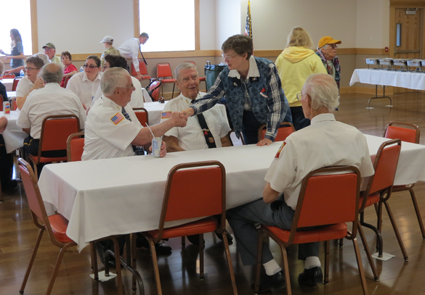 Residents dined with Veterans of Foreign Wars members following the 2013 Memorial Day ceremony in the Village of Lewiston. This year's luncheon will take place inside the Lewiston No. 1 Volunteer Fire Co. firehall.

The VFW asked local elected leaders to help with funding. The Village of Lewiston contributed $500 for this year's event, while the Town of Lewiston gave $600. These monies will go toward parade logistics, including the rental of a viewing/judging stand, and to feeding those attending the luncheon.

"We know that the parade has been popular in the village for many years," Machelor said. "As the Veterans of Foreign Wars, we feel a deep, personal attachment to remembering our war dead. The community has come together to help us this year; the town and the village are contributing significant amounts to help us."

Machelor and Justyk are working with a committee to expand the parade lineup. They're looking to book 75 units.

"People have asked us in past years if they could participate, and we never really had the ability to say 'Yes,' " Machelor said. "Now, due to circumstances and funding, we're able to expand the community's participation."

Those interested in marching can fill out an application form, which will be included in coming weeks inside the Sentinel and on the paper's website. In the meantime, interested organizations and those looking to sponsor the event can contact Machelor at 866-6880.

The parade will commence from North Fourth and Center streets at 11 a.m. It will travel down Center Street to Academy Park, where the Memorial Day ceremony will begin at noon.

Machelor said he is hoping to have a bugler playing taps, an honor guard on site to fold an American flag, singing, and a series of short speeches from local leaders.

"A very important part of our parade is actually to lead you to the ceremony," Machelor said.

Following the observance, the VFW and American Legion C.C. Kenney Lewiston Post 1083 will host a luncheon inside the Lewiston No. 1 Volunteer Fire Co. firehall banquet room on North Sixth Street.

While lunch will be provided, a free will donation will be collected to help offset the cost.

•Justyk said the VFW has begun a membership drive. Applications to join can be found at the Red Brick Municipal Building on North Fourth and Ridge streets, the Town of Lewiston Town Hall on Ridge Road, and the Niagara River Region Chamber of Commerce on Center and South Ninth streets.

New members will meet from 10-11 a.m. Saturday, April 2, inside Lower Niagara Moose Lodge 584, 112 S. Water St. Refreshments and a breakfast pizza will be served. Participants are asked to bring their DD-214 form.

VFW meetings are held at the lodge on the first Saturday of each month from September through May.

Veterans of Foreign Wars Downriver Post 7487 member Mike Roemer leads a past Memorial Day ceremony inside Academy Park. After a year off, the Lewiston event will return in 2016.