Pictured, from left, with some of their school supplies, are Mount View Assisted Living residents Sandra Leaming, Margaret "Marge" Reinard and Cecile Tegler.

In the rec room, a small group of students is discussing the first day of class - a challenging four-credit computer applications course where homework is already due.

Music is playing in the background as their roommates grab a snack and watch television.

In the hallway, a calendar lists Wii bowling, a Sabres game and "Toss and Score" as upcoming events.

As you imagine what is seemingly a chill college residence hall, you're told this scene is, in fact, from an assisted living facility.

At Mount View Assisted Living in Lockport, seniors aren't considered "old people." They're not forced into stereotypical hobbies or limited on what they can or can't do. In fact, they're encouraged to think past limitations - age, sickness, injury or anything else that would slow a person down.

"We don't store people here. We really restart their life and give them a whole different place to go. And it starts with their surroundings.

"We get them to a point where they don't believe that they can get to. We support them and get it to that point. But then I tell them all, 'Now I surprise you; now you surprise me.' "

In 2014, when Tosetto, a Youngstown resident and former Elderwood executive, bought the five-story residence formerly known as Mount View Health Facility, his goal was to offer something unique.

"This isn't a nursing home," he said. "This isn't your traditional assisted living. This is truly restarting their lives at the next level. Where they thought that they had stopped growing, and actually not even plateaued but declined, we get them back up where they were."

The assisted living program's level of state licensing allows its personnel to bathe and dress those in need of such services.

That said, Mount View takes pride in coaching clients back to health.

Some residents improve in two or three weeks. Others in days.

"The success stories have been amazing. Absolutely amazing," Tosetto said.

"This is more than just assisting people with their medication; more than assisting them getting dressed. This is assisting them, literally, rejoining society," he said. "And it's awesome."

When residents are back up on their feet, they can enjoy a dinner theater performance in the main dining room, meet with family and friends in the '50s-themed diner, or engage in the activities listed on that hallway calendar. 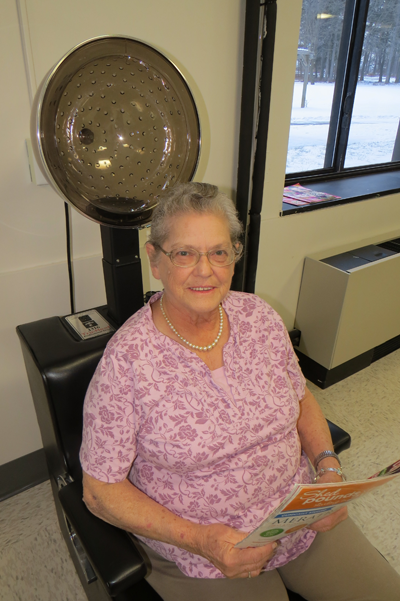 There's even a full salon.

"You look at the salon," Tosetto said. "You go to any assisted living facility, the salon would be a quarter this size. Why? Because you make no money off of the salon. ...

"In our world, I want people to sit here and gather and talk and socialize. Because think about your mom. Think about your grandmother. What's a happy place for them to be? In the salon.

"You look at this salon. This is just like if they walk off the street into a salon. And they get to hang out and talk and do things. They got the leather seats; they got the big mirrors. It's cool. They get to live their life. They take an hour out of their day. They come over here to the salon. They get all pretty; everything looks good."

"They thought we were cute," Tegler said.

"I'm very appreciative of this opportunity that I never had before," Tegler noted.

She added, "We're privileged; we're proud that we're able to take advantage of this program."

"We're financed through Mount View," Tegler said. "They're providing everything."

"(Tosetto) is providing all these benefits for us," she added. "I think that should be recognized."

The three classmates said this opportunity is representative of what's offered at Mount View.

"It's wonderful," Leaming said. "A lot of activities."

"And trips," Tegler said. "He's really a very wonderful person. He treats us like his own."

"We're treated like family, and he wants us to feel that this is home," Tegler said. "He takes us to school; he takes us shopping - you know, like a parent would."

Of his honorary grandmothers, Tosetto said, "The three ladies that are going to college right now surprised me. Because they said 'We want to do something different.' I said, 'What about college?' They said, 'Yeah. Let's go.' And they went today. And they had a blast."

"They're very excited about it," Leathers added.

Tosetto said some of their interests include poetry and writing short stories.

"To see them get into something totally different - computer science, for god's sakes - because they all want to get into creative writing. I said, 'Well, you know, if you go for creative writing, it's all typing now on the computer. It's not writing,' " Tosetto said.
" 'Really? So, we've got to learn the computer?' (They asked.) I said 'Yeah.' I said, 'Do you want to take a computer class, and then next semester you could take the creative writing class?' 'Well, yes!' (They replied)."

"You can't get into this business and not care what you're doing, No. 1. But I think it goes past caring to challenging," Tosetto said.

Mount View is working to fill 150 beds. Since it opened last August, demand has been high, though some openings still exist.

"We just opened up another floor, and it's filling quickly," Tosetto said.

"Traditionally, assisted livings draw from a 10-mile circle. We're drawing from a 35-mile circle," he noted. "It's that different.

"And we accept Medicaid, so essentially it's free."