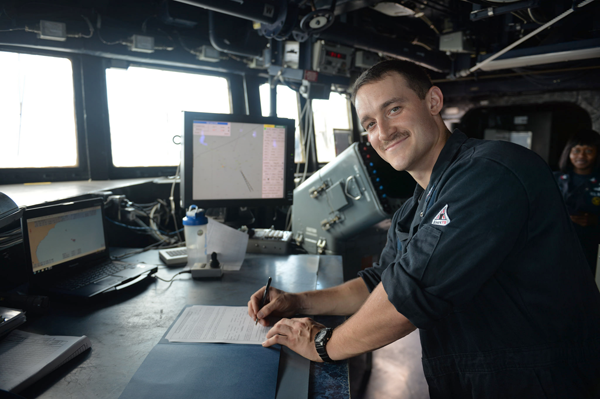 Petty Officer 2nd Class Christopher Eley has been named the Junior Sailor of the Year.

The Sailor of the Year Program recognizes superior performance of enlisted personnel emphasizing outstanding achievements, exemplary personal conduct and military bearing, and demonstrated initiative in the performance of duty. This program also motivates personnel to strive for improvement in their assigned duties and leadership.

"Receiving this honor is very significant to me. It means all my hard work and effort paid off and was recognized not only by my chain of command, but the entire command," said Eley.

"I maintain the primary electronic navigation system for our ship," said Eley

Eley, a 2008 Grand Island High School graduate, enlisted in the Navy after high school and has currently served for five years.

"Serving in the Navy has helped me develop leadership skills and a good work ethic," said Eley.

Eley's commanding officer said he's proud of the hard work and dedication that Eley has exemplified and he definitely notices that it rubs off on the other sailors within the command.

"QM2 Eley was recognized as the Junior Sailor of the Year because of his superior work ethic and the many contributions that he made to the command this year," said Eley's commanding officer, Cmdr. Henry Allen. "Not only does he fill a critical quartermaster billet onboard the ship, but he is a member of Bulkeley's Visit, Board, Search, and Seizure Boarding Team. He excels in both of these areas and has earned the respect of his superiors, subordinates and peers alike for his infectious positive attitude and 'can-do' spirit."

Homeported in Naval Station Norfolk, Virginia, the USS Bulkeley is an Arleigh-Burke, destroyer. These guided missile destroyers have the Navy's latest anti-submarine combat system with active sonar, a towed sonar array, and anti-submarine rockets. They support strategic land strikes with their VLS-launched Tomahawks and are able to detect anti-ship mines at a range of 1,400 yards.

"What I most enjoy about being in the Navy is getting to experience new things every single day and continuing to grow as a sailor and a person," said Eley.