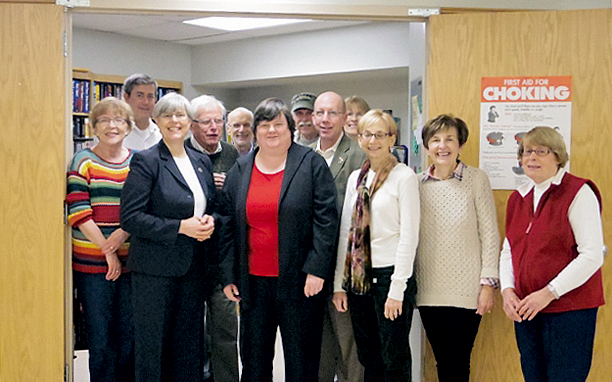 Patricia Covley was welcomed as the new director of the Grand Island Memorial Library by library board trustees. (Photos by Alice E. Gerard)

Patricia Covley said that she was "very excited about the opportunity" to work as the director of the Grand Island Memorial Library.

"I knew that Lynn (Konovitz) was a strong advocate for his library, and he made it clear that there was a wonderful staff and community support for the library," Covley said. She started as director at the end of December.

Libraries have been part of Covley's life since she was a child. A native of Allegany, New York, near Olean, Covley said her hometown had no library when she was a child. She said that her father's sister Mary Wild started the first library in the town in the mid-1960s "from scratch." Covley's parents, Gene and Sheila Quinlan, were volunteers in the effort to get the library started. "It was a grassroots effort."

The original library in Allegany was on the top floor of the town hall. "Now it is in a former bank," Covley said. The microfilm is stored in the vault.

Covley's parents were members of a "friends" group that supported the library. "My mother typed catalog cards at home. I got to see some of the new books first." As a child, she enjoyed reading Nancy Drew mysteries, biographies, and books about sports. As an adult, she likes mysteries and books about history. She said that her favorite authors are Sue Grafton, Doris Kearns Goodwin, and Tess Gerritson. When she's not working or reading, she follows sports and says that she is "very fanatical" about St. Bonaventure University basketball.

Covley majored in history at LeMoyne College in Syracuse. She then went to the State University of New York at Buffalo, where she earned her master's degree in library science in 1983. After graduating, she obtained a job as a cataloguer and adult reference librarian in the Watertown library system.

"I liked the work. I enjoyed reference work because you never know what someone was going to ask you, especially in the days before the Internet," Covley said. One of the more unusual requests that was made of her was the question, "Which state has the tallest people?" Covley admitted, "I never found the answer."

Watertown was a good place to work, Covley said. "People were friendly." It was also an interesting time to be a librarian. She said that the libraries were just getting their first computers so "that was exciting."

Computers have changed the way that libraries function, Covley said. "It has streamlined the work flow. It used to be that catalogue cards had to be typed and filed. Now, we're able to process books and materials much more quickly. We have access to so much more information."

Covley moved to Rochester late in 1984, after marrying George Covley, an elementary school teacher. He currently teaches science, math, and religion to fourth-graders at the Notre Dame Academy in South Buffalo. She worked as the director of a public library in Bergen, a small town in Genesee County. She said, "I liked that you could try different things and get to know many people." She was the only staff member at this library. "I worked with a group of volunteers," Covley said.

"It was neat. I was there for about two and a half years," Covley said, until she and her husband moved to Buffalo, where they had family. Buffalo was "where we decided to start a family," Covley said. The Covleys raised three children: Elizabeth, 25, a cosmetologist, Joseph, 23, a financial analyst in Rochester, and Margaret, 18, a freshman at Mercyhurst University in Erie, Pennsylvania.

Covley joined the Buffalo and Erie County Public Library system in the fall of 1986 as the assistant branch manager of the North Park Library. She said that it was a "much busier library" than the library in Bergen. She said that, between 1986 and 1992, she worked in a variety of libraries in the City of Buffalo. In 1993, Covley became manager of four branches: East Clinton, Niagara, East Delavan, and the Erie County Correctional Facility in Alden. She said, in the correctional facility, "I got a lot of readers, and they constantly suggested books for people to read. They came back the next week and told you how much they liked it. They had a little newspaper called, 'The Lock and Key.' They put short stories and a lot of poetry in it. I liked that job a lot."

Covley worked as a manager until 2001, when she was made supervisor of the Bookmobile and of institutions. The Bookmobile consisted of two tractor-trailers, one bus-sized vehicle, and one vehicle the size of a milk truck. For budgetary reasons, the Bookmobile was shut down in 2005.

"They are bringing the Bookmobile back. I was working on it at the Central Library when I came here. It will have one vehicle, and it will go to rural areas without libraries and to under-served communities. It will represent the library at different public events," such as Canalside and the Erie County Fair. The new bookmobile is scheduled to get on the road in late spring or early summer.

The institutions part of Covley's job involved the Erie County Correctional Facility and the Erie County Holding Center. In addition, Covley said that she worked with librarians in state correctional facilities. She said that James Patterson and John Grisham are favorite authors for people in jails. "There is a variety of interests, just like there is on the outside," Covley said.

By late 2004, Covley became supervisor of four different branches, in addition to her work with institutions. "The branch managers reported to me," Covley said. "I enjoyed it, but I missed the interaction with the public. I like working with people. It makes me a better librarian. It's hard to know what people are looking for when you never interact with folks. When someone comes in, and they are looking for things that are important to them, you can make a difference."

In 2010, Covley became the head of collection developments. "We did the ordering for the system. One of the best parts of the job was that you got access to pre-publication books." She said that she got a copy of Sue Grafton's book "X" two months before it came out.

"I opened the boxes from the publisher. It was so much fun," Covley said.

She stayed in that position until the summer of 2015, when she started working as supervisor of institutions and on the bookmobile, which she left to come to work as director of the Grand Island branch.

Staff members said that they enjoy working with Covley. Nancy Vizzi, a senior page at the library, said of Covley, "She is very nice. It's been a seamless change. This is a wonderful place to work."

Julie Bordonara, a library clerk, added, "She (Covley) is easy-going and has a lot of good ideas."

Covley said, "The people of Grand Island have been very welcoming, and I look forward to working with them," Covley said. 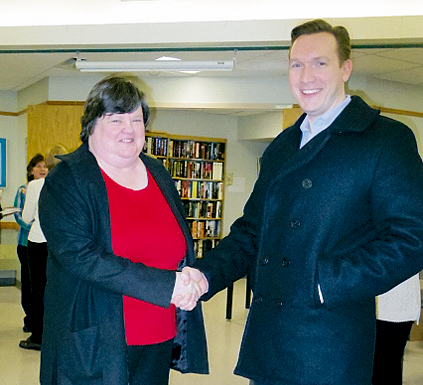