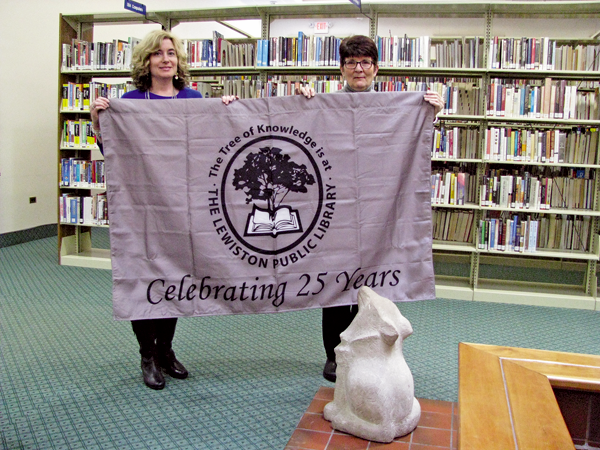 Stop by for Saturday celebration

Shhhh! The Lewiston Public Library isn't likely to be the usual quiet place to read the newspaper, use a computer or check out its abundance of books and movie, television and music CDs from 2-4 p.m. Saturday, Jan. 30.

Community members of all ages are invited to stop by at 305 S. Eighth St., and join the celebration planned by the Friends of the Lewiston Public Library to observe 25 years at the current location.

Festivities will begin with a flag-raising ceremony. The Friends purchased two banners, one to fly outside the library with the American flag and one to be displayed inside. They read: "The Tree of Knowledge is at the Lewiston Public Library ... Celebrating 25 Years."

Speakers, promising to be brief, will include Jill Palermo, current library director; Janet Domzella, a former director who oversaw the construction of the new building, as well as the move into the new space; and Linus Ormsby, president of the Lewiston Public Library board of trustees.

Sign up for the drawing for an Amazon Fire tablet, browse displays on the library's history, including photos and memorabilia, and send the kids to the children's room for stories and craft activities. Refreshments will be available for both children and adults. Also, gift bags will be distributed to the first 100 attendees (one per family).

"We thought 25 years is kind of a customary milestone, so it would be a good opportunity to focus some attention on the library and what this library provides for to the community," said JoAnne Lotterio, Friends president.

Her group works year-round to raise funds to help the library purchase items it might not otherwise be able to fund from its budget by holding an annual book sale at the Red Brick Municipal Building (with a yearly fresh supply of donated books), maintaining a book sale room at the library itself (open during regular library hours) and sponsoring special events. Recently, the Friends paid for an update of the library's Wi-Fi system.

"Not every community is as fortunate as we are," Lotterio said. "Staying current with the times keeps the patrons coming in."

Lewiston has had its own library for more than a century.

On Jan. 1, 1901, the Men's Club of Lewiston sponsored a New Year's Day party at Moss Hall (the present day Opera Hall), with admission being a book to start a library in Lewiston. One of the books was donated and signed by President Theodore Roosevelt. It can be found in the Local History Room today.

The library's first official location was at 469 Center St. In 1908, it moved to 535 Center St. (now DiCamillo Bakery). In 1961, the library moved again to 505 Center St. (known as the Long House or the Hotchkiss Building). Needing more space, the library was able to build its current building with the help of funding and land from the Town and Village of Lewiston, from special legislative grants from state Sen. John B. Daly and Assemblyman Joseph Pillittere, and from donations for special projects from the Lewiston Service Guild, the Friends of the Lewiston Public Library, the Lewiston-Queenston Rotary and Modern Disposal Inc.

Town of Lewiston Councilman Bill Geiben said, "I was so glad that it was built in the village, because it's the center of commercial activity and people can stop by the library as they're running errands in the village.

"It supplements the other libraries that we have in Sanborn and Ransomville. They all work cooperatively together providing a service for the Lewiston residents."

Both Lotterio and Palermo have loved the Lewiston Library since they were kids.

"I've been a patron since I was a child growing up in the village," said Lotterio, who is in her fourth year as president of the Friends and has been a Friends member for about 20 years.

Palermo grew up in Youngstown, but she would visit her father, who had an apartment on the second floor of the Long House, while the library was below, and would take books and return them after hours, sometimes pausing to straighten books on the shelves. She was eventually hired as a library page while in high school.

Palermo earned her master's degree to become a librarian and worked in almost every position at the Lewiston Public Library before becoming director in 2010.

Her library has plenty of parking and is all on one floor, spacious, comfortable, and even has an inside fountain where children (and some adults) like to toss coins. The Lewiston Garden Club maintains the library's indoor garden and assists with seasonal decorations.

"We do get compliments that we are one of the more beautiful libraries in the NIOGA system," Palermo said.

It is known as a popular collection library, offering what is most current and in demand. Regular weeding out of the collection provides extra items for the Friends sale.

Dreams for the future include a larger genealogy room as the search for peoples' roots become more and more popular, a second meeting room as demand for the current room grows, and possibly even a coffee shop.

Village of Lewiston Mayor Terry Collesano called the library "a community asset," and said, "The more people use it, the better off everybody would be."

Geiben said, "The library is not only a place for reading and books, it's also an informal community center where people gather for all sorts of activities."

"People of all ages use the library. From little children in the reading room - the children's' area - learning to love books, to seniors and the general public just signing books out; going there to read the newspaper; taking out books on tape, videos; it provides lots of service," he added. "And computers, which are very essential in today's world; some people don't have computers of their own, and they have the opportunity to use the library."

For more information on the library or the anniversary celebration - where no one is likely to say "Shhhh" - call 716-754-4720 or visit www.lewistonpubliclibrary.org.