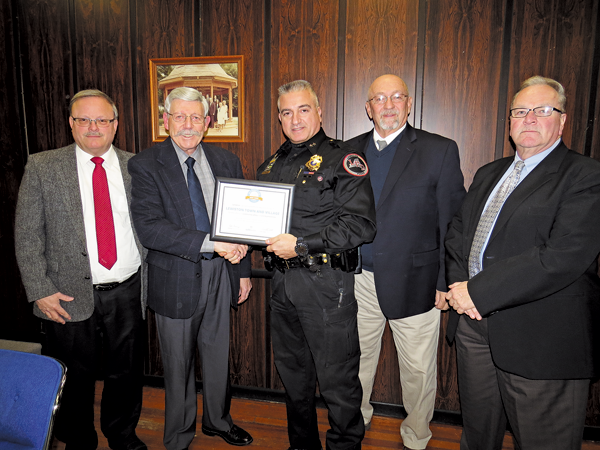 Lewiston Police Department Chief Frank Previte shared a certificate with the Village of Lewiston recognizing placement on the SafeWise.com list of safest cities in New York. He is pictured, center, with board members Vic Eydt, Mayor Terry Collesano, Bruce Sutherland and Dan Gibson.

Safety was the theme of Tuesday's Village of Lewiston Board meeting.

"I'm proud to present the board a certificate," he said. "I want to thank the board, first for its commitment to the department. I think it says volumes when we wind up in the top 25 safest cities in New York state. I think that's quite an accomplishment. I think it's a testament to both boards' commitment to safety and law enforcement in the area. I think it's evident ... that's a big reason why people live here and move here. And we need to keep it that way - and move our way up on that list."

Previte said the certificate also was an opportunity "to do a little bit of bragging for my officers and the commitment they have to the department and to the town and the village."

Mayor Terry Collesano told Previte the accolade "is much success to your organization."

"Chief, you've done an outstanding job; and your officers likewise," he added.

"One thing I want to spend some time on is the snow removal in the village right-of-ways," he said. "According to the code, the homeowners and the business owners in the village have to clear the sidewalks in front of their property - even though it's on a village right-of-way. Now that we have snow - it was a problem last year - and I want to make sure we catch it; to make sure folks know, because the village can't do it all."

"I commend Terry. He gets out there. He does the streets and, before they're all done, he's even getting the sidewalks done with the machines that he's got. And I think that's awesome," Eydt said. "I think that the business owners could step up - at least between the sidewalks and the curb. We're not asking them a lot. We're doing the brunt of it. I mean, (Terry) goes even down the side streets - and even the new sidewalks you put in. I notice they were even doing the new sidewalks over on Third and Seventh. ...

Trustees have lobbied the state for a reduced speed limit on Center Street to ensure pedestrian safety at the crosswalks. They asked the Department of Transportation to lower the 30-mph zone to 25 or 20, but were denied.

Subsequently, they asked St. Peter's R.C. School to submit a request asking for a 15 mph school zone speed limit in front of the Sixth Street church.

In a letter to the school dated Dec. 28, DOT Regional Traffic Engineer Thomas S. Messana, P.E., wrote, "It is the policy of the New York State Department of Transportation to establish a school speed limit only on roadways which are directly abutted by the school property. St. Peter School property does not abut Center Street; therefore, we have determined that we will not establish a school speed limit on Center Street."

"It was a valiant try, but we were denied," Collesano said. "I'd still like to pursue getting the speed limit lowered on Center Street - I think we all would - but, so far, we haven't succeeded."

Previte said, "I think it's a good idea, and I think we need to pursue it. Especially with the crosswalk situation. When people stop (to allow pedestrian crossing; as required by law), they almost get rear-ended half the time."