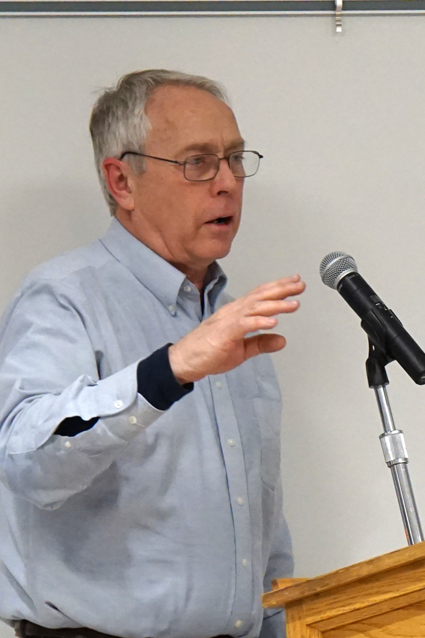 Reg Schopp, chairman of the naming committee in the Grand Island Central School District, speaks during the Jan. 11 Board of Education meeting. (Photo by Larry Austin)

Grand Island Board of Education hears proposal for video screen

School board trustees were briefed last Monday on a proposal to present the story of the founders of the Grand Island school district on a modern video screen.

At the Jan. 11 regular board of education meeting in the high school Professional Development Room, the trustees heard a presentation from Reg Schopp, chairman of the district naming committee, about an idea to establish a digital Wall of Fame in the Viking Mall that would honor those people who laid the foundation of the district.

"Serving on this committee was a joy," Schopp said, adding that volunteering offered him an opportunity to honor music teachers William and Mary Pinkow who "so touched my life as a student." When the committee formed and starting talking about different ideas, some decisions were obvious, like naming the football field after coach Gene Masters and the athletic fields after longtime athletic directors H. David Myers.

Schopp, a member of one of the first graduating classes from Grand Island High School, said the naming committee had considered naming the GIHS auditorium after the Pinkows, but finally settled on a suggestion from a student to call the aud the Grand Viking Theater.

As the committee considered other ways to honor the Pinkows, an idea to establish a Wall of Honor with plaques soon morphed into the concept of a video screen as "a way that we could present the stories of the people" that have shaped the district.

Schopp said he was told one person who has worked at Charlotte Sidway for years still knows little about the person the building is named for, as the building offers scant historical information describing her accomplishments. The videos would tell stories in a way that simple names on a structure could not.

"It sort of snapped. It made sense," Schopp said of when the idea came up.

"I think that one of the other pieces that came out of the discussions was that ... this could be inspirational," he said.

"There's been a lot of people that have really contributed significantly to the school district as a whole," he said.

The board took no action on the proposal.