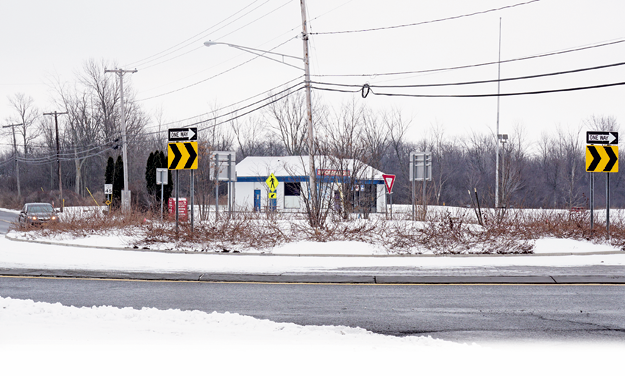 Roundabout redesign: Ceretto asks DOT to make changes to the center of the traffic circle

New York State Assemblyman John Ceretto is asking the Department of Transportation to redesign the roundabout at the intersection of Staley Road and Grand Island Boulevard.

In a letter to Darrel F. Kaminski, regional director of the New York State Department of Transportation, on Dec. 21, Ceretto wrote, "After receiving a great deal of feedback from my constituents about the appearance of the landscaping of the median on this roundabout, I am requesting that the Department of Transportation replace it with hardscaping for easier maintenance as well as improved appearance."

The median of the roundabout is at the center and is currently filled with vegetation.

Ceretto, who represents Grand Island in the 145th District of the New York State Assembly, added: "As the first thing a visitor entering from the south sees, this roundabout plays an important part in the perception of Grand Island. Unfortunately, in its current state, the perception is negative and reflects poorly on our community. A combination of high traffic, severe elements and neglect has left the landscaping unattractive and damaged. Replacing the landscaping with hardscaping would vastly improve the appearance, as well as being easier to maintain."