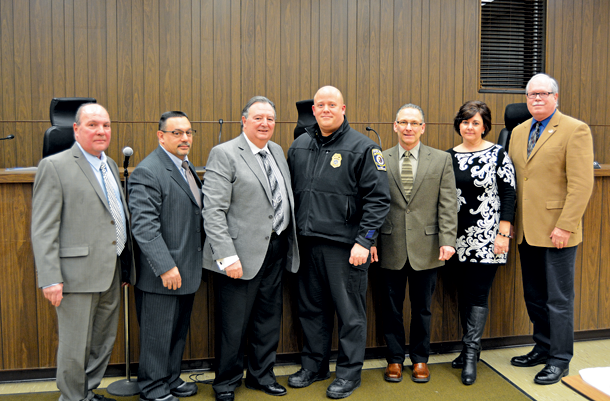 Town of Niagara Supervisor Lee S. Wallace told residents at Tuesday's Town Board meeting he has received questions on the Belden Center improvements project, particularly, "What is dragging the project down?"

"The cause of the project to drag is the New York state controller's office," Wallace said. "Because of the cost of the project, it exceeds the dollar amount that is more than a percentage that they were comfortable with. They made us deliver a packet of information and then it took us almost three and a half months to put it together, and that's what's held the project up. We anticipate that it will start back up again in probably late March, early April."

Engineering and planning company Clark Patterson Lee Project Manager Jason Havens said, "We are moving as fast as we possibly can within the circumstances. ... We've been working with the residents all along the way. ... We have meetings with them ... exclusively for the progress for this project and unfortunately, given the circumstances of the funding, we have to do things exactly as they want them, which takes time."

Havens said phase one of the project has already been bid, however the project cannot be officially awarded until the Office of Community Renewal, which has issued the grant funding for the project, releases the funds.

Once work begins, phase one is anticipated to be finished after five weeks, depending on the weather, as the process is temperature-sensitive.

Phase one involves lining the sanitary sewers. "It's a process where we actually do a resin injection into a liner and we heat it up with steam and then it basically creates an interior lining. And it will seal all of the sanitary sewers from allowing infiltration and any cracking that's been (made) will be fixed," Havens said.

Water-resistant lids will be placed on manholes to limit the amount of sanitary sewer flow and backup generated during heavy storms.

Phase two will focus on dealing with storm water. Improvements will be made to existing ditches and pipes and eventually road surface treatments will be implemented on specific roads.

"We're also going to be redirecting a bunch of the flow that is on the surface to where it should have been going in the first place; essentially to capture more of the water; reducing the amount of flow that goes behind the homes, so that anything that's on the road goes to the ditches or to the pipe and then transfers to the storm system to take it away from the houses," Havens said. "That's the objective."

In other news, the board approved the purchase of a stage for Veterans Memorial Community Park.

The stage contract was awarded to low bidder Stageline Mobile Stage Inc. at a cost not to exceed $135,090.

Wallace said Wednesday the board chose to purchase a stage for "more than a few reasons."

He said the town currently rents a stage from the City of Niagara Falls for its summer concert series at a cost between $1,000 and $1,500 per event.

"Renting the stage puts us at the mercy of the city, and we have to request the use months in advance and hope that it meets our scheduled needs," Wallace said. "Plus, at $1,500 a concert, it costs us approximately $12,000 (per) year (which is for eight concerts) just for the stage, which doesn't including lighting."

He also said the town's concert series will be expanding to from eight to 10 shows this summer, therefore making the cost closer to $15,000. "Plus the new stage comes with lights, which cuts our lighting/sound cost down by approximately $200 (per) concert for an additional $2,000 in savings per year."

He added the stage rented was not an actual concert stage, which made it difficult to accommodate larger bands.

Wallace said based on the figures, the stage would pay for itself in approximately eight years.

The stage was purchased with donations from Republic-Allied Waste and the New York State Power Authority.

The board also awarded its light pole contract for the park to low-bidder Graybar Electric at a cost not to exceed $63,000. Furthermore, the 2016 contract for grass and plant fertilization for the park was awarded to TruGreen Commercial at a total cost of $4,834.

In addition to park developments, the board approved goal No. 1 of the strategic plan.

"This is the first goal, and it primarily deals with customer service, and our pledge to customer service and the businesses and the residents of our town," Wallace said. "Once the entire plan is approved, we will make a large presentation so that everyone will see (what we are doing) with this proposal, this plan."

Craig Guiliani was appointed police department captain Tuesday. Wallace called Guiliani up in front of the audience to congratulate him.

"It's a full circle for me," Guiliani said. "There's a lineage in our family. My great-grandfather was a chief here; my uncle (the late Gary Guiliani) was a chief here; so moving up is just the start of that process."

Guiliani said he looks forward to "continuing on what we are doing already and just working with the board and working with our chief and continuing to work with the community."

All members of the board congratulated Guiliani on his new position. Town Clerk Sylvia Virtuoso said, "It's an honor to have you work with us. (I'm) proud of you. You do a great job."

Guiliani recently collected all the donations for the Monnen family, who lost their home at the Cayuga Village Trailer Park to a fire last week.

Town of Niagara Deputy Supervisor Charles F. Teixeira said, "This last weekend we had the firemen's installation dinner. I welcomed the firemen and congratulated them all on their service and, just the week before, their volunteerism went into major effect with a fire at one of the trailer parks where the home was totally burned. ... I just got to commend Niagara County and the residents of this town that came forward with clothes and toys for the kids and the things this family needed. ... I think (after) two days, they had to stop taking donations. So it says a lot about this community and I thank them for their service and I thank the community for the generosity they have for those in need."