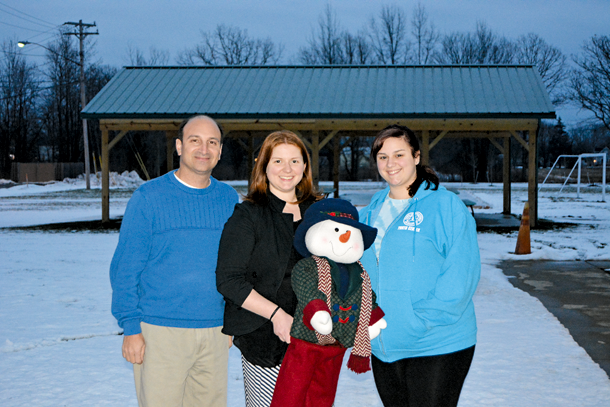 Celebrating winter: First Wheatfield Winterfest planned with activities for all

Both the Town of Wheatfield's Civic Advisory Focus Group and Recreation Department have come together to plan and host the town's first Winterfest, to be held from 1-4 p.m., Saturday, Jan. 30, at the Town Hall complex.

This free, family-friendly event is open to the public and offers activities and entertainment for both children and adults.

Also, an ice rink has already been created outside the Youth Center where children will be able to skate during Winterfest.

Other planned outdoor activities include snowman-making, snowpainting, hayrides in the snow and more.

"Not everybody has access to snowshoes. ... You usually have to go somewhere. ... We're lucky that the group is bringing them in," Zeller said.

"This is something that I know other people have experienced at other Winterfests up in Quebec City, and you heat maple syrup and then you put it on a slab of ice and you make maple taffy," Town Clerk Kathleen Harrington-McDonell said.

"There's just so many things that people normally wouldn't get to do. You'd have to have to go to Canada to do that type of thing, and we're bringing it here," Zeller said.

"We'll also have a visit from the army with a Humvee," Zeller said. Swag and photo opportunities will be available.

"We have a lot of snow-dependent things, but we have enough that's inside to kind of balance it," Zeller said.

Some of the Youth Center's indoor activities include a bounce house, NERF game and crafts.

Also, the Aquarium of Niagara will pay a visit to Winterfest.

"The aquarium is bringing in their mobile touch tanks so all guests will be able to interact with some aquatic sea life that are brought in that day," said Richard Torcasio, Civic Advisory Focus Group chairperson for the Town of Wheatfield.

Zeller said members of the civic advisory committee and Youth Center staff will help run children's activities stations and Community and Senior Center Administrator Gail Connery will oversee the adult activities in the Community Center, including wine tasting provided by A Gust of Sun Winery, as well as live music by Kathy Lynn and the Playboys.

Food will be available, as the Cheesy Chick food truck will be on site. St. Johnsburg Fire Co. will serve hot chowder. The Town of Wheatfield Lions Club will offer hot chocolate and coffee for participants.

Ranalli said the team members rely on each other for coordinating all of the activities and "None of this happens without every other member of the group, because everyone is doing something to kind of get it expedited, because it is in (less than) two weeks."

The idea of Winterfest originated with members of the Town of Wheatfield Civic Advisory Focus Group, whose goal was to identify potential events that could be held in the town.

"Our Youth Center and our Recreation Department do a fantastic job with all their summer programs and the facilities they have. The Town of Wheatfield annual Summer Committee does a fantastic job with that. But some things had (fallen) to the wayside that used to be done by town employees on their volunteer time," Torcasio said.

That's when the team of three - Torcasio, Ranalli and Harrington-McDonell - thought up Winterfest.

"We've actually come up with the idea the year before, but we didn't have time to really get it together and really pull it off," Torcasio said.

He said the event was inspired by "The lack of activities in this section of the year. We came out of the Christmas season and the first event we had traditionally done before this was 'Christmas in July.' ... So we said, 'Well, if we do a Winterfest in the winter months, in the January, February timeframe, we'll pretty much (have) the best chance of having snow on the ground - that would be a great event.' "

Ranalli said he brought on his Recreation Department team to help make it happen.

Soon after, a meeting was arranged and, from there, Ranalli said, it was "business as usual. It's business as usual for us, because it's just another challenge. We like to challenge ourselves to kind of keep things fresh."

Zeller said, "We're the type of group that, like, we get an idea and we just run with it. We want to get things done. We take charge and make sure things happen and we will not disappoint."

Torcasio said, "I think (Wheatfield) has a history of producing very good events for all of our residents, which will help round out the year. ... We think an outdoor event is really going to complement the events the town provides to our residents already."

Zeller also said Winterfest is a different, new way to reach out to the whole community.

"There's still people coming in and they don't know the programs that we offer," she said. "So it gives them a way to kind of experience the building and outside in a different way than we've done before.

"I mean, we have our normal parties for Easter and Halloween and for tree lighting, but this is just a different type. It's not because it's a holiday, it's just for fun to bring everybody out - especially during the winter, because usually our winters have the potential to be harsh. ... So I think it will be nice no matter what the weather is. Rain or shine or snow or not snow, I think it's going to be a great opportunity to bring everybody together."

Harrington-McDonell said, "We want people to come to the Town Hall and the Community Center and Youth Center because there's so many people in Wheatfield that aren't familiar with those buildings, so we want to get people used to coming for a variety of events."

As far as hopes and expectations for the event, Ranalli said, "It would be foolish for us to judge the success based on the number of people that attend the first one because like anytime we start a new program ... you set a plan, you stick to the plan, you execute the plan and then you analyze what happened. ... We'll get feedback from residents and people who showed up and we'll start planning next year's."

After the event, Zeller said she hopes "new and returning families come ... I hope that we have more participants for the Youth Center and that we can fill this facility every day of the week."