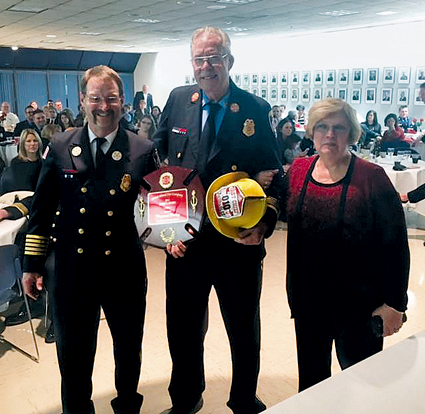 The Grand Island Fire Co. has recognized a longtime member of the fire service for going above and beyond.

At the 2016 installation of officers ceremony held Saturday, Jan. 9, at fire headquarters, Fire Chief Matt Osinski presented the 2015 Fire Chief's Award to Firefighter Ray Pauley for his 52 years of active service and lifetime commitment to the Grand Island Fire Co.

According to the fire company, Pauley has led the yearly top 10 responders list for as long anyone can remember, and has been the primary driver out of the GIFC's station No. 3 for whichever piece of apparatus needed to respond.

Osinski was honored and humbled to present the 2015 Chief's Award to Ray Pauley for his years of service and selfless dedication to the GIFC and the community. Fire company members say Pauley has had a positive affect not only on the numerous lives that have been saved because of his service to the organization and the Grand Island community, but also to the newer generations of firefighters who he has passed on both his knowledge and expertise in the fire service so they may also have a successful career with the GIFC.

In 1989, Pauley became the fire chief, where he served in that position for two years. Pauley's commitment to the GIFC did not end there; he then served an additional 20 years on the GIFC board of directors. Pauley has also served as the public information officer for the GIFC since 1999, and continues to serve in that role today.

Osinski said Pauley doesn't get the credit he deserves.