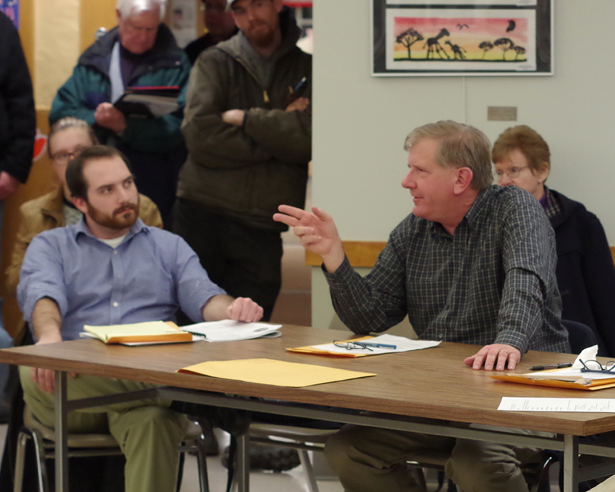 Decision on including farms in agricultural district imminent

The Erie County Legislature will decide Jan. 21 whether or not to approve the applications of approximately 40 Grand Island farmers to be part of the Amherst Agricultural District. All approved applications will then be forwarded to the New York State Commissioner of Agriculture and Markets for certification.

Farms are certified for eight years.

Tripi said the protection is needed because, "In some cases, the town has been hostile in the way that it applies laws."

He was referring to the town's Right to Farm law. According to Tripi, every community has different guidelines regulating how many farm animals can be permitted on a piece of property. He said that, as an example, the City of Buffalo permits more chickens per acre than does Grand Island. Buffalo permits five chickens per house. In Grand Island, on the other hand, people need to own six acres of land to have five chickens.

Town Supervisor Nathan McMurray said, "The existing town code needs to be updated to allow for broader agricultural rights. We have a Right to Farm law, which is implemented in an inconsistent and irrational manner."

Erie County Legislator Kevin Hardwick said, "I think that the people of Grand Island should decide the future of agriculture. The best context is by updating the master plan.

"Ideally, this whole question of agricultural districts and their role in Grand Island should have been done in updating the town's master plan."

The town's master plan was last updated in 1998.

McMurray described the role that he would like to see agriculture play in Grand Island. "Grand Island should be and should remain a rural community or a green space between Buffalo and Niagara Falls. Under the New York State Constitution, agricultural space should be protected," McMurray said. "Farming is economic activity. It is a natural prevention against bad development. Right now, Western New York is going through a mini-property boom as Niagara Falls cleans its act up and Buffalo continues to develop. A lot of people are looking at Grand Island with greedy eyes. If we develop wrong, it would definitely crush the infrastructure, destroy our schools, and permanently scar our landscape."

One Island resident who has run into difficulty with the town is Tom Thompson. "The chickens were the foremost reason that I got started on this mission. In September, the town sent me a letter saying that I have chickens. I've had chickens since 1998, when I came to the Island. The town told me that I needed to get a variance (to the town's zoning law)." Applying for a variance costs farmers $100.

Islander Steve Birtz said that he grows between 6,000 and 7,000 heads of garlic. When the vegetables are in season, Birtz and his wife Trish Giordano Birtz sell vegetables at a stand in front of their house. According to Birtz, being part of an agricultural district would benefit his farm and other farmers. He said that farmers would get help from the state in dealing with "unreasonably unrestrictive ordinances. It would make it easier for us to farm, and we wouldn't have to worry about town harassment on the farming side."

According to Hardwick, there have been many potential roadblocks for applicant farmers. He said that the Erie County Agricultural and Farmland Protection Board made a recommendation on each of the 45 Grand Island farmers who applied for district membership. "They eliminated a handful, saying that they were not appropriate and recommended that we approve the balance."

The previous Town Board, Hardwick said, sent a letter, through the town attorney, to the Erie County Legislature, recommending that none of the properties be included in an agricultural district.

Erie County Health Commissioner Dr. Gale Burstein also sent a letter. She stated that one of the properties that had been recommended by the Erie County Agricultural and Farmland Protection Board had been charged with repeated violations of the Erie County Sanitary Code and that this property should not be considered for district membership. The owner of that property has challenged the violation notices. There is currently pending litigation concerning this property.

Hardwick said he "met two weeks ago with the people from the Erie County Department of Environment and Planning." The department had recommended that all applicants be rejected and that the application process be redone.

Hardwick said he worked with all parties to "smooth things over."

McMurray said that there are issues that have to be dealt with, that could create a nuisance. "If something is not a farm or, especially if it is a farm for commercial use, we should have much less tolerance for smell, dust, and dirt. If someone wants to put a commercial farm in a residential district, I'm not going to be supporting it.

"I understand those who have concerns. Where inappropriate agricultural activities are occurring, I'll stand up to it. I don't want a herd of cows in the back of a subdivision any more than you do. But you should also know that I want farms on Grand Island," McMurray said.

Tripi said, "We are trying to protect the land and enhance our right to farm. We encourage people to be responsible. There won't be more dust, more smell or more noise."

"We want people to reconnect with their food. We want them to be aware of where their food came from," Tripi said.

According to Birtz, "It enhances the Island to have a lot of people growing things and to have farm animals." Without any agriculture, "you'll look like Cheektowaga, with no rural areas."

McMurray said, "People see farming as the past. Farming is actually the future and, especially locally sourced foods. I want our community to embrace that. Community supported agriculture would be great. If there are more ways to get local food, I'm all for that."