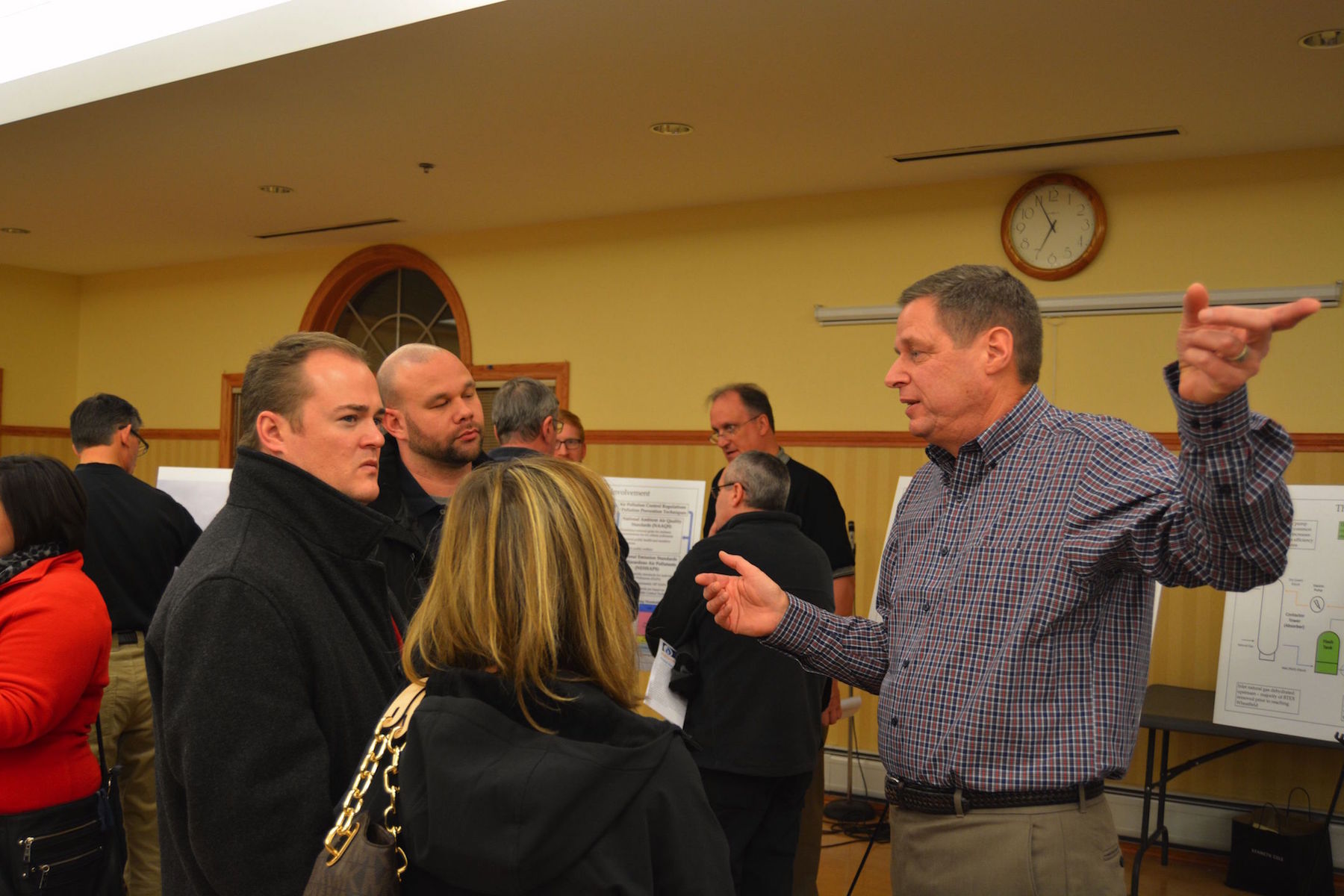 For the first hour of the event, residents were able to speak one-on-one with National Fuel representatives on the dehydrator.

Before National Fuel began its presentation, Vice President of National Fuel Gas Supply Corp. Ron Kraemer sat down with the Tribune to answer some of the common questions asked by residents at recent town board meetings.

One major concern from residents is that harmful and hazardous emissions coming from the dehydrator could cause negative health effects for those living nearby.

The dehydration facility in Wheatfield would remove moisture out of the natural gas stream flowing from Pennsylvania through the interstate pipeline, most likely into Canada.

The U.S. standard for moisture content is seven pounds per million. In Canada, it's only four pounds.

"And the reason it's lower is because it's colder. ... So it's really that simple," Kraemer said.

He said, often, the gas traveling through the pipeline contains less than four pounds of moisture, therefore the Wheatfield dehydrator will only be in operation at certain times throughout the year, if any.

"It will not be running constantly," Kraemer said. "We looked back over the last year and determined ... there would have only been two days that the gas wasn't already dry enough that we'd even have to dry it again," Kraemer said. "I think most of the time I'd say it's not going to run. Most years I would say it won't run. I would say ... a rare year might run a half a dozen times."

When the dehydrator runs, the emissions that could be left over from the moisture and disperse into the air are known as BTEX (benzene, toluene, ethylbenzene, and xylenes).

To further minimize the emissions, National Fuel would install an additional facility known as a thermal oxidizer. After the moisture goes through this piece of equipment, BTEX "are basically incinerated. They go through a very high temperature chamber and they are burned up. ... So any water, moisture, that gets boiled off of this ... that would go to the atmosphere - if there were any BTEX in it - they go through this thermal oxidizer and 99 percent of that is taken out. And the end result of that - you can't measure any of the BTEX. It's down to such a low level of BTEX it is immeasurable," Kraemer said. Therefore, the 1 percent left over is "virtually nothing," he added.

To support Kraemer's explanation, an outside consultant for National Fuel, Innovative Environmental Solutions Principal Jeff Panek, said the level of possible emissions from the dehydrator is not harmful.

"The emissions from this facility are going to be very, very low," he said. "We are in the lowest possible category for permitting registration the state has."

Panek also said the gas will have already gone through another dehydration facility before reaching Wheatfield.

"So, the pollutants that folks are concerned about will have been further reduced even upstream," he said. "So by the time they get here, there will be trace levels of benzene, toluene, ethylbenzene, and xylenes. And that's the main concern with the dehydration facilities."

Kraemer said, "The emissions, in my opinion, are a non-issue. I hope we can explain that to people's satisfaction."

Besides the dehydration facility itself, residents have been concerned about possible future developments on the site leading to installation of additional equipment and machinery.

Before the forum, Wheatfield Deputy Supervisor Larry L. Helwig said, "I'm more scared of what might come down the road than what may be here initially, because Cambria has a compressor station and a glycol station."

Kraemer said there will not be a compressor at the Wheatfield site.

"There is a big piece of property, most of it's wetlands and not really usable," he said.

Furthermore, Kramer said that, even if they wanted to expand, which they do not, they would not be able to due to the wetlands.

Some residents have researched alternative dehydration methods that would not give off emissions.

"I know that our residents are really concerned about the emissions. I'm hoping that we can really kind of push the idea that we want the desiccant, which is the alternative," Wheatfield Action Team member Jennifer Wozniak said. "National Fuel knows about the alternative. It has not been tested in a higher production, which is what our dehydrator is gong to be; however, there is one out there. So our whole goal is to get the one with no emissions."

When asked about the use of an alternative that would not give off any emissions, Kraemer said, "There's all kinds of different drying devices, but they're not designed for 35 million cubic feet of gas. ... This is a 20-foot pipeline that we're trying to dry, not a small stream of gas that's going through some instrument or some small process. Those desiccant dryers and those sorts of things are not capable - I mean the facility would be just dozens of acres of these towers."

Like many residents, Wozniak is still looking for an alternative to National's Fuel's dehydrator, despite National Fuel's responses.

Kraemer noted, "Nothing's for nothing, as they say. You still have to deal with that residue from desiccant that has to be removed and disposed of."

Besides the issue of emissions, concern among residents regarding noise and vibrations coming from the facility have also been brought up.

Kraemer said, "There's none of it. The closest house is about a half a mile away. ... You physically won't be able to see it; you will not be able to hear it. There will be no smell from it. There is no vibration from it."

Also, residents have been concerned about possible explosions due to a mechanical malfunction.

"It's a mechanical facility. I can't tell you that there is not risks," Kramer said. "Any mechanical facility has a risk of some sort of accident, whether it's an industrial accident or a failure. But this is being designed to the highest standard there is. There's different (classifications) that you build to, and that brings with it the safety factor. And we're designing it to a Class 3 standard, which is the highest standard of design. So all of the pipeline - all of the vessels - are designed to that highest standard."

Kraemer also said that, in the case of an accident, National Fuel has facilities in Niagara Falls, Tonawanda and employees on the road 24/7.

"We operate as a single company including our utilities," he said. "So the people that respond to a gas leak in your house are the same people that would respond to this facility and, frankly, we'd be able to shut it in remotely from our gas dispatch center anyway if there is any issue."

After the presentation and the forum ended, several residents said they were still concerned and not satisfied with National Fuel's responses.

"I felt that the forum could have been more a place that National Fuel Gas, as big as they are, could have shown that they were going to be a 'good neighbor' by giving us the information that they had, but then not dismiss our concerns like they did," said Wheatfield Action Team member Mike Alianello, who lives about a half mile from the proposed facility's location. "They could have taken our concerns into consideration, did some research as to the possibilities of addressing these concerns. ... National Fuel Gas wants us to take their word for it and take the 'that's the way it is' attitude. Our health and welfare may be in jeopardy."

Wozniak said, "National Fuel Gas's answers did not make the residents feel any better. Many people saw through their responses. They skimmed over some questions and cut off people. They have clearly not done their research and just put this facility in an M1-industrial place without any risk assessment about the surrounding community. This meeting did nothing but anger our residents. We will keep fighting."

Ultimately, the decision on whether the dehydrator will be approved to be installed in Wheatfield will be made by the Federal Energy Regulatory Commission.

Wheatfield Town Supervisor Robert B. Cliffe said, "Hopefully, newly informed residents, who remain concerned, can now address their concerns to FERC through the FERC website so that FERC can give them consideration prior to approval of this site."

Residents can submit their comments to FERC at https://ferconline.ferc.gov/QuickComment.aspx.