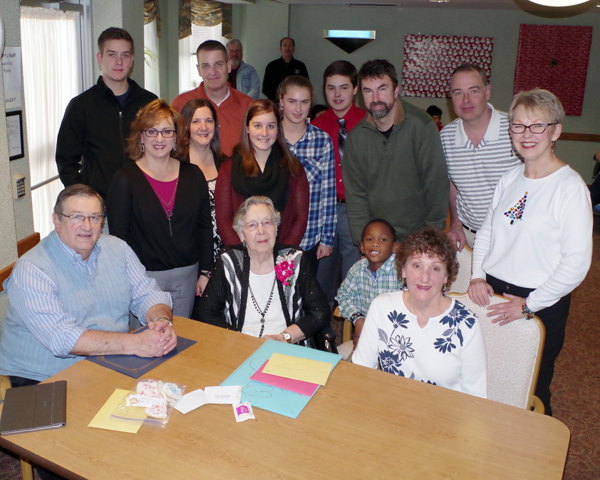 The family of Elsie Fleischmann gathers around her Tuesday at Elderwood to celebrate her 100th birthday. She was born Dec. 31, 1915. (Photo by Larry Austin)

As Grand Islanders prepare to ring in 2016, one Islander will ring in her 100th birthday.

Longtime Island resident Elsie Fleischmann turns 100 years old Dec. 31. Tuesday at her home at Elderwood at Grand Island, family and fellow residents of Elderwood gathered to celebrate the birthday of a living link to the birth of the fire service on the Island.

Also on hand to celebrate with Fleischmann was Grand Island Town Supervisor Mary Cooke, who visited the party at Elderwood to present Fleischmann with a town proclamation that officially set Dec. 31, 2015, as Elsie Grace Moreland Fleischmann Day in the Town of Grand Island.

Before reading the proclamation at the birthday party, Cooke told the gathering that she recently met with the GIFC fire company leaders, who described to her the vital fire protection duties that auxiliary members provided the Island. In 1939, Fleischmann helped found the ladies auxiliary, which was essentially the fire company's dispatch system back in the day, before first-responders had widespread radio communication and even before landline phones were in every household.

"There really wasn't even advanced phones. And the way that the firemen knew where to go for the fire was because auxiliary members would have a chalkboard in their house, or garage or on their porch, and they would get the call with the address and they'd have to run out to the side of the road and write the address down," Cooke said. "And as the firemen passed by, they would look (at the chalkboard) and see where the fire was, and that's how they showed up at the right house."

"She was there from the beginning and helping with all of those tasks," Cooke said.

Born in Kenmore and raised with nine brothers and sisters, Elsie Grace Moreland graduated from Kenmore High School and went to work at Remington Rand. She married her husband, Elmer, on Aug. 23, 1938, at St. Stephen R.C. Church and moved to the Island, just a couple years after the first Grand Island Bridge opened.