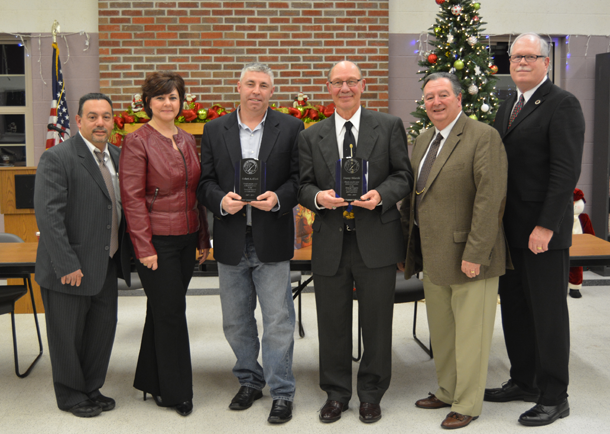 Town of Niagara: Board concludes meeting with emotional goodbye

After business was discussed, the Town of Niagara Town Board said goodbye to two of its councilmen: Danny Sklarski and Robert A. Clark.

Both said a few words that summed up their career as public officials and how thankful they were to serve their community. The board presented them with gifts, thanking them for their service.

"Other than being a member of the cloth or a clergy, I really can't think of any other vocation or profession or job, so to speak, that has more rewards and more satisfaction than being a public official," Sklarski said.

Clark said, "Having had responsibility to the point where you have to worry about having to make the right decision for our town - it's not just these people or those people, it's everybody that lives here - it kind of opens your eyes to other things that go on. To everybody that allowed me the opportunity to sit in this chair, I am more than thankful."

Sklarski said, "As you can see, and not only in this meeting, but in other meetings prior, we are definitely headed in the right direction and that is something that I think very resident in this town should be very proud of, no matter what party affiliation you are. It really doesn't matter. We're a small town and we're all together in this."

Also retiring is Town Historian Dorothy Rolling, who has provided more than 30 years of service.

The board presented Rolling's daughter with a gift to accept on her behalf.

"She's served us well," Supervisor Lee S. Wallace said. He passed on thanks "from the bottom of our hearts for all she's done for the Town of Niagara. She will be sorely missed and hard to replace."