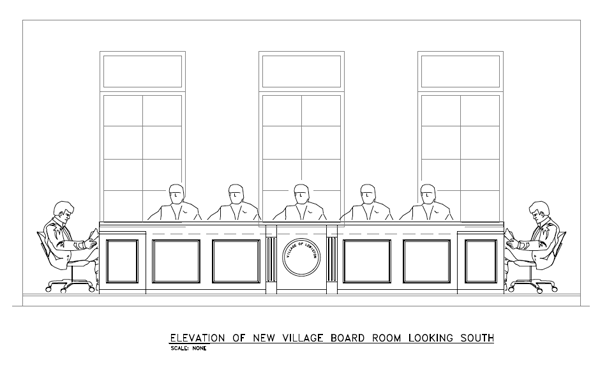 Shown is a drawing depicting the new look of the new Village of Lewiston boardroom inside the Red Brick Municipal Building. (Contributed image)

Residents in the Village of Lewiston will notice two significant changes in the new year. Trustees are planning to move their boardroom down to the front of the Red Brick Municipal Building (second level). At Monday's monthly meeting, they said they hope to be in the new location in February.

Leading the transfer is Trustee Nick Conde, who came up with schematics for the room. The diagrams show a new dais for the board facing south. Above it would be wood-trimmed windows and open spaces for natural light to enter the room.

Also included is a digital screen, which would be used to project proposals for audience members to see. As is, meeting attendees often struggle to see boards and plans submitted by developers in the existing boardroom. Traditional paper models would be replaced by electronic versions broadcast into the meeting room.

"I think it's going to be really nice," Mayor Terry Collesano said. 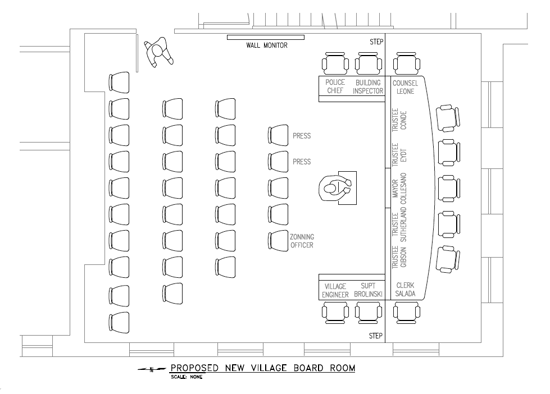 Shown is a drawing depicting the new look of the new Village of Lewiston boardroom inside the Red Brick Municipal Building. (Contributed image)

Conde recognized former Village of Lewiston Attorney Paul Grenga, who is leasing the room the board desires. Grenga offered to make it available and will soon move his furniture to another office location.

"I like it," Collesano told architect Tom Johnson, who was representing plaza owner Eagle Group Inc. "It looks much better."

Pictured above is an artist's rendering of the proposed exterior change at the Rite-Aid plaza on Center Street. (Contributed image) Shown below is the current plaza design.

In other news from Monday's session:

•The Department of Public Works will be more vigilant in checking grease traps at village restaurants and establishments serving food. Those found negligent in cleaning their devices can be expect to receive a hefty fine.

•St. Peter R.C. School has asked the state's Department of Transportation to create a school speed zone along Center Street from North Eighth to North Fifth streets, with a suggested speed limit of 15 miles per hour. The Village Board encouraged this correspondence as a means to slow down Center Street traffic.

For several months, trustees have mentioned motorists are not yielding to walkers at posted crosswalks, thus creating a dangerous environment for passers-by.