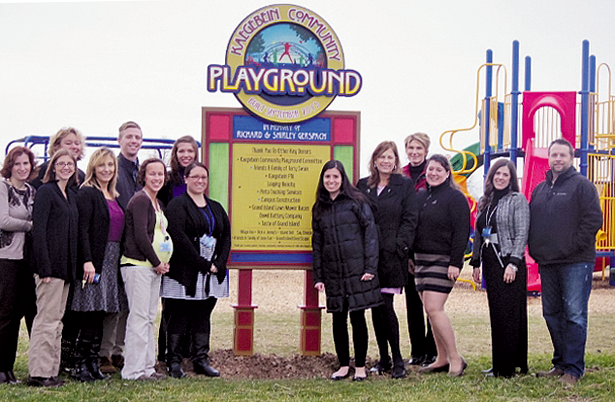 Five years ago, when the Kaegebein Playground Committee formed, the idea of a playground for Kaegebein Elementary School seemed like a distant dream. The Town of Grand Island was unable to finance the playground. The committee would have to raise all of the money for the project. Five years and $60,000 worth of fundraising later, Kaegebein has its own community playground. On Dec. 10, a sign honoring the major donors to the new playground was dedicated.

Cyndy Montana, president of the Kaegebein PTA, said the original plan was to dedicate the sign in the spring. "I never dreamed that we could have the sign dedication in December. We decided to take advantage of the weather. It's finally done."

The names listed on the sign are those of "significant donors," Montana explained. She added the $20,000 donation made by Paul and Pam Gerspach was made "in memory of Richard and Shirley Gerspach." Two other memorials listed on the sign are to Grand Islanders Leon Carr and Terry Swain. "This is an amazing legacy," said David Brand, chair of the Kaegebein Playground Committee. 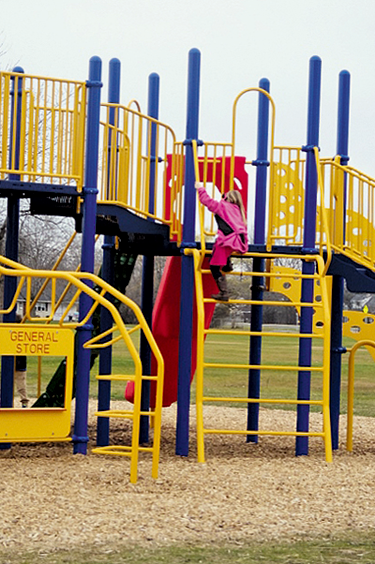 A child enjoys the new playground that David Brand, Chair of the Kaegebein Playground Committee, said is compact and has "so much to do."

The playground was built Sept. 18 and 19. Brand said he did not anticipate the number of volunteers who turned out to build the playground. "It's an absolute joy and excitement and an absolute sense of community. I was happy to see the turnout of people to put it (the playground) together," he said.

Montana said that 13 years ago, a playground at Kaegebein was Kim Cich's "dream and vision." Cich founded the Kaegebein Playground Committee five years ago and chaired it until she moved to Amherst. When the playground was built, Cich said, "This teaches kids about perseverance. Never give up your hope or your faith that this could happen."

Brand talked about the journey that he took to help make the dream of a playground at Kaegebein into reality. "I would drive by Kaegebein to take my children to Sidway or to Huth Road Elementary School's playgrounds, and I thought that wasn't right. I got asked to join the committee, and it wasn't long before I became chairman."

When Brand became chair of the committee, there was $4,000 in the account. Brand said that he decided to run the committee "like a business."

Brand and the committee organized a variety of fundraisers, including "kickoff to fall" and "kickoff to summer." He said that, at the last "kickoff to summer," held at the school on June 19, there was a raffle of library chairs that were decorated by local artists, as well as five bounce houses for the kids to enjoy. He said that Leaping Beauty donated the bounce houses, a tent, and popcorn and snow cone machines for the event. "It was awesome. We raised a ton of money. It was a great community event," Brand said.

The teachers and students at Kaegebein were also involved with the fundraising. "The kids did talent shows and a spaghetti dinner." One of their events, held in 2014, was titled "dinner and a show," Brand said. Children donated money for the playground from their own funds, as well. Montana mentioned Izzy Burke, a Kaegebein student, who donated her birthday money for the playground.

The playground is now in use. "To see kids having a great time is one of the best feelings in the whole world," Brand said. "I want to thank all of the people in Grand Island, who helped us out in any way. They should be proud of the beautiful playground that they have."

"This is a community playground, paid for by the people of Grand Island," Brand said.