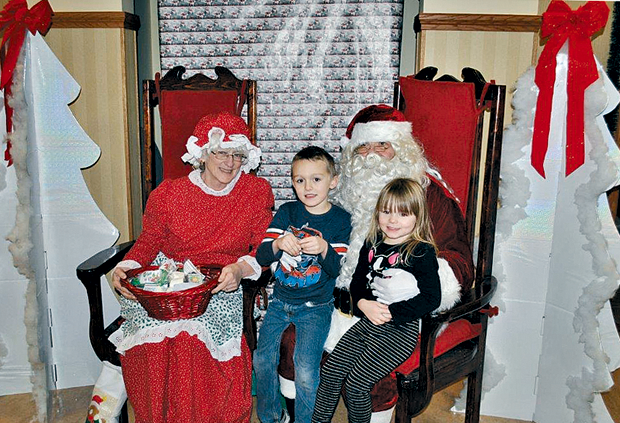 Children visit Santa and Mrs. Claus during a Christmas party held at the community center in Wheatfield. (Photos by Walt Bissett)

Wheatfield residents celebrated the Christmas season during the annual tree lighting and Christmas party Saturday. The event was put on with the help of staff from the town's youth and recreation departments, as well as its Community Center. The night kicked off when Santa arrived near Town Hall on a fire truck.

"I'd like to thank St. Johnsburg for escorting Mr. and Mrs. Claus safely to our event," Town of Wheatfield Recreation Director Mike Ranalli said.

Santa flicked a switch that lit up the entire Town Hall complex. Afterward, all were welcomed to partake in several Christmas activities offered inside the Community Center.

This year's theme for the event was Christmas movies, specifically "How the Grinch Stole Christmas," "A Charlie Brown Christmas," "Frosty the Snowman" and "Rudolph the Red-nosed Reindeer."

"We had four different crafts and food items that tied into each of the four themed areas," Youth Center Program Coordinator Heather Andrzjewski said.

One of the new features added to this year's party was a showing of the film "How the Grinch Stole Christmas" on a large projector screen. Children watched the movie as they waited in line to make crafts, eat food and, of course, visit Santa.

A show by Nickel City Reptiles and Exotics was also featured at the event, which Andrzjewski called a "big hit." During the presentation, reptiles were shown to children for both entertainment and educational purposes.

As for the event as a whole, Ranalli said, "The feedback was overwhelmingly positive. It's all free for our residents, so the parents thanked me and the staff for providing a fun night for their children at no expense to them."

"A lot of work goes into planning and carrying out our parties," Andrzjewski said. "We create a vision for the party and then work together to make it happen." 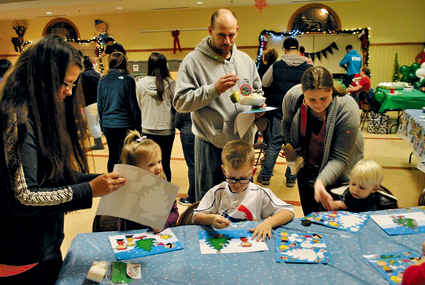 Children make a variety of holiday crafts inside the Community Center.