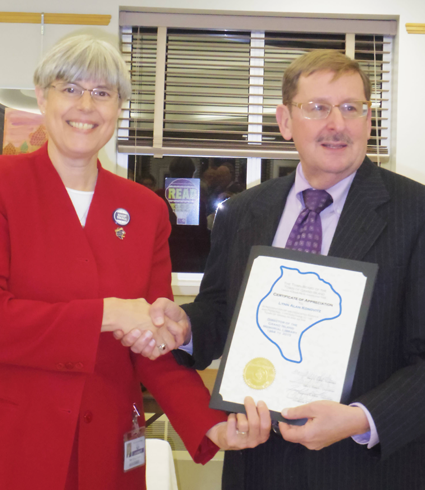 Town Supervisor Mary Cooke presents Lynn Konovitz with a certificate of appreciation for his dedicated service and personal contributions to the Town of Grand Island as the director of the Grand Island Memorial Library from 1984 to 2015, signed by the Town Board.

A large and appreciative group came to a reception Dec. 7 at the Grand Island Memorial Library to celebrate Lynn Konovitz's 32 years as library director and to wish him well on his upcoming retirement.

"The event turned out beautifully," said Youth Services Librarian Anne Slater. "We have so many people from the community and from the (Buffalo and Erie County Public Library system's) Central Library (in downtown Buffalo). Some of the young people who are out of college came because he was such a good boss. He mentored the young people who worked here as pages."

Jill Banaszak, member of the library's board of trustees, said, "It will be a challenge for us as trustees to replace Lynn Konovitz. He has amazing big shoes. It will be hard to find someone to fill them."

As of Dec. 9, the shoes have not been filled. Board of Trustees President Pat Rizzuto said, "We are working on getting a new director. We really have been working on our search. We are hopeful of having one soon."

Konovitz's last day at the library will be Dec. 23.

Banaszak said that the event to celebrate Konovitz and his contributions to Grand Island's library was "wonderful. The turnout was great. Everyone brought great food to share." Many also had reflections on Lynn Konovitz and his tenure as library director to share as well. Senior clerk Julie Bordonaro handed out song sheets and led the assembled group in singing two songs that she had written, both titled "Mr. Konovitz Retirement." One song was sung to the tune of the "Mickey Mouse March Song" and the other song was sung to the tune of "The Logical Song."

Charlotte Senulis said: "He (Konovitz) has been amazing. I've never known the library without him. He's leaving an amazing legacy of accomplishment." Senulis is a member of the board of directors of the Friends of the Grand Island Memorial Library.

Rosa Ziolkowski, who has lived with her family in Grand Island for 12 and a half years, said, "When my kids were little, we went to different libraries for story time and to borrow books. The librarians here are so nice and helpful, and they go out of their way to help you." Ziolkowski, who teaches kindergarten in a dual-language program at Olmsted School 64 in Buffalo, complimented Konovitz and the library staff for all of the help that they provide for her in obtaining the materials that she needs for her students in such areas as science and nonfiction books. "They go and they search for you. It's incredible," Ziolkowski said.

Paul Leiner, a library patron who works as the director of library research at Goldhaber Research Associates, said: "He did an incredible job. He has increased the circulation and brought new things to the library. He's done so much. Whatever is here is because of him. The Librarian of Congress is usually not a librarian. In this case, Congress should make an exception and give the job to him. Speaking as a librarian, you spend 90 percent of your time outside of the library, meeting with various organizations. I am in awe of what he's done here."

Jean Leiner said: "He's done a fantastic job and will be sorely missed."

Young people who worked with Konovitz also had praise for him. "Mr. Konovitz is great," said Alexander Re, who worked as a library page from 2009 to 2014. "He is always the hardest working, most focused person here. This (the turnout) is just an example of how many people love and respect him. He's been doing this for so long. He hasn't slowed down, even when he knew he was retiring. He still had stuff to get done. I hope whoever replaces him can fill his shoes."

Jacob Dixon worked as a page from 2012 to 2015. "It's going to be a big change," he said. "Grand Island is such a tight community. Mr. Konovitz has such a personable personality. I hope that the next person who is hired works his way up to that."

Konovitz said that he enjoyed the reception in his honor. "I was amazed and deeply appreciative. I saw people here that I haven't seen in a number of years. I am extremely grateful to the library board, the Friends of the Grand Island Memorial Library, the town, and to everyone who came out to make this a wonderful night for me."