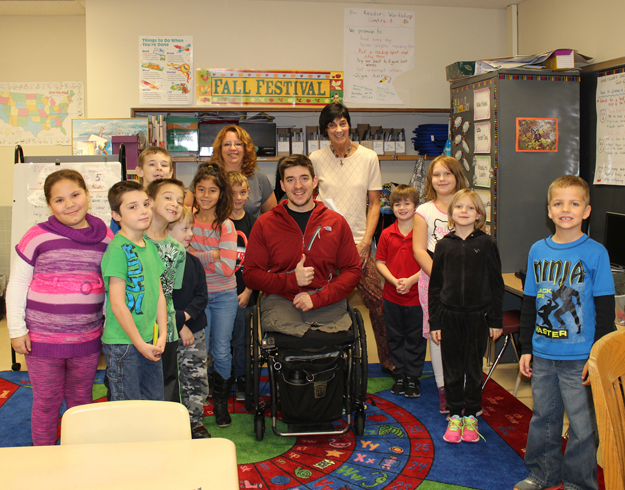 North Tonawanda Meadow Elementary teacher Judy Hagan can still remember Tim Payne as a little boy when she taught at Gilmore Elementary more than 20 years ago.

"I love to hear what past students have been up to since they were in my class," Hagan said.

In 2011, one of Payne's nieces told Hagan her uncle Tim stepped on an improvised explosive device in Afghanistan while serving as an infantry squad leader in the army and lost both of his legs.

"I was very saddened about that," she said. "I knew he was a fighter and I was so happy to hear that he was recovering and turning this incident into something positive."

Payne underwent 130 surgeries, 100 blood transfusions, fought bacterial infections and flesh-eating fungal infections and, thanks to the medical staff at Walter Reed Army Medical Center and his sheer will, he recuperated and began another chapter of his life's journey. President Obama awarded him several medals, including the Purple Heart and the Lifetime Achievement Award. Payne also wrote a book, "The Squad Leader's Bargain." He now spends his time touring the country to talk about his experience that he said physically and spiritually altered his life.

Hagan was thrilled to see Payne after placing third in her category at the Veterans Race held at the Erie County Naval and Military Servicemen's Park. Payne was the honorary race-starter and saw Hagan receive her plaque. "He told me it was always a pleasure to see me and I invited him to visit my class and talk to the students at Meadow, and he said he would be glad to," Hagan said.

Payne showed up as promised and talked to the third-graders about why he joined the military, why he loved it and what happened when he stepped on the IED. He also shared his goals for the future. "I joined the Army Airborne Infantry Regiment right after 9/11 because I wanted to fight for our country," he told the students. "I loved it. My friends were my battle buddies and they were like brothers to me. It is where I learned my values that I live by and got me through the most intense experience of my life. Those values are: loyalty, duty, respect, selflessness, service, honor, integrity and personal courage.

Payne shared what happened to him on July 3, 2011. "I was on my last patrol with my men and I stepped on an IED. It was so intense; it caused my clothing to completely disintegrate. I lost my right leg below the knee, and my left leg was blown wide open from the groin down. My left arm was blown open from the elbow to the palm. There was a bunch of holes and burns on my right arm. I was thrown backwards and into some trees, approximately nine feet. I really should have been dead," he said.

Payne told the students it was his faith and a higher power that guided him through his injuries. "I look at what happened to me as an opportunity to rediscover and reassess my life. "I wanted to (travel) around the United States and talk to people about overcoming things in their lives and how it takes a lot of hard work to do that. My job now is teaching values and, I want to tell you, a big one is integrity," Payne said. "Always try to do the right thing, even if no one is watching. Respect yourself, your teachers and each other. Living by your values will make you a wonderful person."

"The students all wrote him thank you notes," Hagan said. "They were very inspired to never give up and always put forth their best effort to succeed. We are all so proud of Tim and hope to see him in the Paralympics in Brazil next September."