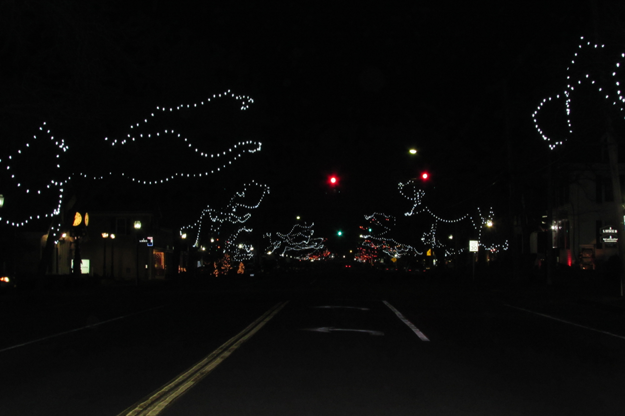 Such is the response Village of Lewiston officials have received since white lights went up on Center Street trees late last month.

The conversation moved into the mayor's office Monday during the Board of Trustees' work session.

South Fourth Street resident Skip Hauth said, "There was a tremendous amount of appreciation for how the village looked (last weekend), with all the decorations both in the (Historical Society) museum and at the (Tour of Homes)," he said. "But we had more than 600 people who showed up at the museum, and we had dozens of comments about how unsettled people were - and how unhappy they were - about the streetscape decoration lights.

"The new blue lights, as they're calling them, don't fit what people view as the kind of decoration that Lewiston ought to have. It's a significant departure from what they're used to. They don't like the look of it. They think it looks haphazard, as well as they don't like the coloring." 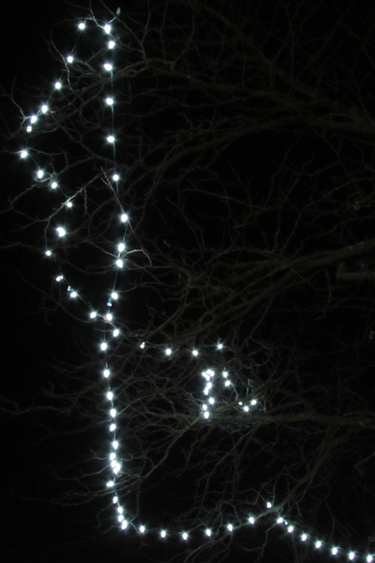 "Skip, we are aware of peoples' displeasure with the new lighting system," Mayor Terry Collesano said. "I was out Saturday myself going around, and I got bombarded by people. There was hardly a block I got down without getting hit by somebody in regards to the lights."

The large, "cold" white LED lights are prominently placed on certain trees, with strands hanging out over Center Street. The traditional red and green Christmas bulbs are on other trees, and farther tucked into the branches.

"This is something that was brought up to us, maybe about a year ago," Collesano said. "The Chamber of Commerce thought that it would be nice to have the white lights on Center Street. After going back and forth talking about it, we felt that maybe we could do the intersections and see how it looked.

"We weren't sure how it was going to come out, but I think that we know now that most of the people are opposed to it."

Kristen Hibbard-Trunzo, chairwoman of the Niagara River Region Chamber board of directors, explained, "We have gone back and forth with the entire board for over a year as to doing this. This was a project that we wanted to do for the village on a yearly basis. The white lights in the intersections were just the start of what our final (idea) was to be, which was to have lights all year long on Center Street - through the summer; through every season; so that it was lit up; it was something that people would come to see."

"The problem, No. 1, in doing that, is that, when you have year-round lighting, it can't be glass bulbs. And the length of time that they're going to be on, you cannot have traditional bulbs, because the longevity of them is not there," Trunzo said. "This was a trial just on intersections. ... To tell you the truth, these lights that are up on the intersections right now cost over $11,000 that the chamber paid for (partly through a grant). And the reason that we did them with the LED was because they have to last if we're going to keep them up all year round."

The lights were purchased earlier this year, but couldn't be assembled or displayed until recently.

"The DPW was so overwhelmed this year with road repairs and everything else, that it was not in the cards to get it done prior to now," Trunzo said. "If it were done then, everyone might've gotten all these questions out of the way."

Now, "We realize people are unhappy, but there is no way to go non-LED when the longevity has to be what it is," Trunzo said.

As to the look of the lights and their location on the trees, Trunzo added, "It just got out of hand, because the DPW was just so busy, and they had to put everything up when they had time to do it.

"We understand, but everyone in the Village Board, as well as the chamber, was aware that this was going to happen. And this was just the transition year to see how it looked.

"At this point, we don't want to throw stones. We don't want to get people all upset. ... We thought that we were doing something nice for the village, but, you know, if it's going to cause trouble, we have two other municipalities that are more than willing to take those lights and be more than happy to have them all year long.

"It's a decision that the board is going to have to make along with us, but we have two municipalities right now that would say 'Please give them to us. We'd love to have them.' Because they'd like to light their place up all year long."

Chamber Vice Chair and incoming Lewiston Advisory Council Chairwoman Jamie Symmonds said, "The first time you do anything, it's a trial run. Nothing ever comes out perfect.

She added, "If the community is really that upset, I say we offer them to another community that would be happy to have them.

"I think we could do it better. I think there's a better way to do it."

"I think, in the summertime, walking down the street, people are out shopping at night - going to dinner. Seeing just the white lights, I think it would give a totally different effect," she said. "Right now, you're seeing the combination of the two, and I think that's the big problem."

"When the summer rolls around, we could put them back on and see how they look," he said. "Because there's going to be leaves on trees. You're going to lose the string look to them."

"That was our original intent, was to put them on when there were leaves on the trees, " Trunzo said.

"We are grateful to (the DPW) for everything they do," Symmonds said. "And I think we all have to remember that they do a lot for us.

"They threw them up there. Again, this was a trial run. I'm hoping that we can all sort of keep that in mind. And that's how we learn. We grow from the first time doing something, and we can add to it."

Collesano said, "I have been in communities ... that have the (businesses) all done with the white lights and it is really attractive. It is beautiful."

In the village, "I think (the problem) is the contrast between the colored lights blinking and the plain white lights. They just don't jive," he said.

DPW Superintendent Terry Brolinski said, "It's easy enough to unplug everything. It's just keeping the lights in the tree when you start trying to overlap strings.

"Maybe when we're up there taking the colored lights down in January ... maybe we can push the white lights deeper into the trees to hold?"

Ultimately, "They're up now, and we knew it was going to be a trial run, so they will last through Christmas of this year," Collesano said. "Next year it could be different."

Following the conversation, the chamber received an impromptu round of applause for its contribution to the village. 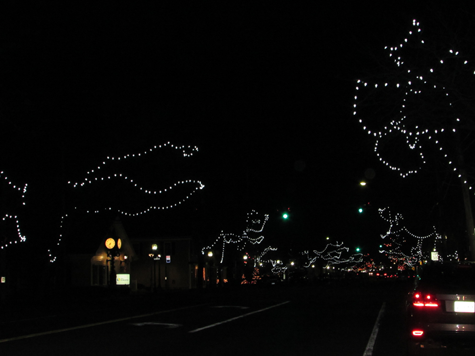